Darts at its finest.

James Wilson came into the PDC World Darts Championship fancied a lot and, as 26th seed, he was actually showing that tag was underselling him.

Willie O'Connor ran up against a hot-handed English man in round two at Ally Pally and had to show tremendous resolve to even get anywhere near him in that first set.

Between the pair of them, they ran up four 180s in four legs of darts and the amount of throws it was taking to finish off each leg was unprecedented for a first set.

Darts to finish each leg in the first set

With the set on the line, O'Connor needed something special to let the rampant Wilson know that there were two men in the battle and, with a 147 checkout in leg bloody three, the Limerick native brought Alexandra Palace to its collective feet as he stole a leg and brought himself back into contention.

Wilson won the extraordinary first set in the end - with no more than 15 darts, of course - and he was never going to lose it as he averaged 112 throughout.

But O'Connor's revolt set the tone for the second set the Irish man wasn't long in exacting revenge with a 3-1 victory of his own in the second set and by God how he enjoyed it.

The second set saw O'Connor hit another 180 when the pressure was on to wriggle back control of his throw and he also finished with a 110 too.

The only leg he lost was when Wilson finished on 160.

And he powered on to produce the result of the championship so far. 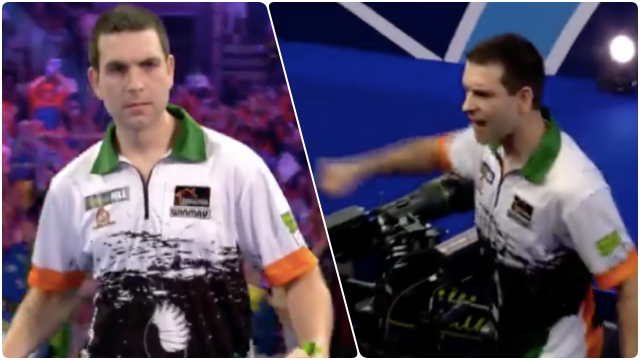 Never have so many large men produced movements that consistently and aggressively draw the breat...


popular
Galway fans' frosty reception for Davy Fitz doesn't make any sense
The most Stone Age tackle you've ever seen gets South African lock straight red card
Former Antrim captain Anto Finnegan has passed away
'Brian was a genius... he would've killed you to even win a game of touch'
Ryan Manning hacked to the ground by Henri Lansbury in ruthless assault
Tottenham and England legend Jimmy Greaves dies aged 81
"Johnno went, 'We’re not moving! You're trying to mess us about!'" - Ben Kay recalls red carpet controversy
You may also like
2 years ago
Willie O'Connor stuns Ally Pally with biggest upset of World Darts Championship
2 years ago
The odds for Rob Cross to get back to the final are tasty
2 years ago
"We're not scared of the men, we'll have a good go" - Lisa Ashton almost had it
1 month ago
Paul O'Donovan busts the cliches and leaves the mystery behind him in one more emphatic interview
1 month ago
Fintan McCarthy and Paul O’Donovan receive emotional ovation upon return to Olympic village
1 month ago
"Ah I suppose it's fine" - Paul O'Donovan and Fintan McCarthy are Olympic gold medallists
Next Page