Olympic silver medalists Gary and Paul O'Donovan feature in the latest episode of Red Bull's 'Way of the Wildcard’ series which tells the story of unexpected athletes succeeding in the most unlikely circumstances.

The O'Donovan's shot to national prominence when they won silver medals in the Men's lightweight double sculls at the 2016 Olympic Games in Rio de Janeiro.

The two brothers were very well received by the Irish public and Red Bull visited the siblings in their native Skibbereen, Co. Cork, recently to find more about where they're from and who they are. 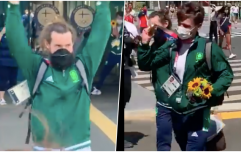 END_OF_DOCUMENT_TOKEN_TO_BE_REPLACED

It makes for an excellent watch and helps explain how two brothers from the south coast of Ireland excelled in a sport almost exclusively catered for society's elite.

The O'Donovan's will make their debut at the Henley Royal Regatta in London next month, an event regarded as the world’s most famous rowing regatta.

The O’Donovans will compete in the Double Sculls Challenge Cup.


popular
Shane Walsh: 'That's not how I was coached to play football. No one was coached to play football that way'
Spicy Donegal semi-final the highlight of a rip-roaring weekend of GAA on the tv
Seven exciting Ireland prospects pushing for November squad inclusion
Lynch keeping his uncle's memory alive through his hurling
"Ah, come on!" - Richie Sadlier and Didi Hamann couldn't even agree to disagree on Griezmann's red
Derry club win county final factfile games with extravagant set of jobs
"Where Johnny Sexton is so important to us now is being able to pass the baton"
You may also like
2 months ago
"Ah I suppose it's fine" - Paul O'Donovan and Fintan McCarthy are Olympic gold medallists
2 months ago
Croatian rowers crash live RTÉ interview with Paul O'Donovan and Finbar McCarthy
11 months ago
"They were like rock stars to us" - Gary and Paul O'Donovan on their childhood heroes
2 years ago
Gary O'Donovan on why he's in the best form of his life
3 years ago
Despite their success the O'Donovan brothers still look to Irish counterparts for inspiration
3 years ago
Sanita Puspure takes inspiration from O'Donovan brothers following gold medal win
Next Page