We're not going to lie to you, we have not watched this in its entirety.

Dubliner Fergal O'Brien will compete at the Crucible for the first time in seven years following Wednesday night's epic 19th and deciding frame against David Gilbert.

Level at nine frames a piece, the final stanza broke the world record for the longest snooker frame of all time - clocking in at over two hours and three minutes.

Longer than the world's quickest marathon, or a game of football plus extra-time, or two episodes of Game of Thrones and only 10 minutes shorter than Rogue One: A Star Wars Story.

The longest service game in tennis ever, between Noelle van Lottum and Sandra Begijn, was 52 minutes.

O'Brien managed to stay awake long enough to speak to a conscious member of the media afterwards: "Obviously in an ideal world you win a bit quicker than that. 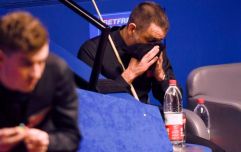 END_OF_DOCUMENT_TOKEN_TO_BE_REPLACED

"The balls went scrappy in the colours and I was so tired, double-checking everything and I'm so, so relieved.

You can watch the drama from 4 hours and 18 minutes into the video below. Go on, you know you want to.


popular
The SportsJOE 12 o'clock quiz | Day 105
The SportsJOE 12 o'clock quiz | Day 104
James Haskell on text exchange with Peter O'Mahony after Ireland's victory over Scotland
David Beckham recalls how a trip to Ireland got him in trouble with Alex Ferguson
"Shane was just gifted. He could play centre back, centre forward, he had everything"
The SportsJOE 12 o'clock quiz | Day 103
"The academy boys have turned into small monsters over the past few weeks" - Peter O'Mahony
You may also like
1 year ago
Ronnie O'Sullivan gives one of the more unusual interviews after Players Championship win
2 years ago
Snooker world champion Mark Williams lives up to naked press conference vow
2 years ago
Mark Allen clinches first Masters title after beating Kyren Wilson in absorbing showdown
2 years ago
Cao Yupeng revolutionises way to hold cue in awkward position
2 years ago
Ronnie O'Sullivan hits peak 'Rocket' as he lets fan take shot for him
3 years ago
WATCH: "Granite" Mark Selby proves he is one of the greats to battle back in memorable snooker final
Next Page