Take a bow, AB de Villiers. When you're done, take another one. You absolutely deserve it.

We've watched the catch he pulled off during Thursday's IPL match between Royal Challengers Bangalore and Sunrisers Hyderabad a good few times now. We've seen nothing to change our minds that it is one of the finest catches we've ever seen taken on a cricket field. You'll probably agree with us, too.

The Sunrisers were chasing down their opponent's total of 218 when Alex Hales attempted to smash Moeen Ali's delivery into the stands. He nearly did, too. 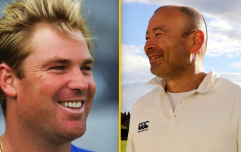 END_OF_DOCUMENT_TOKEN_TO_BE_REPLACED

De Villiers leapt to a ridiculous height before plucking the ball from the sky with his right hand, returning to earth and landing millimetres from the boundary rope.

If you've resisted scrolling down for the video already, well done. If not, enjoy... you'll soon understand why it's being described as the 'catch of the century' by many that saw it.

Catch of the Century. AB De Villiers. This is no ordinary catch Its magic. pic.twitter.com/mK4YvP6yJy

This is how Ab De Villiers saves RCB in IPL #RCBvSRH pic.twitter.com/DnXIi5pL13


popular
Man United could be blocked from playing in the Champions League next season
Ireland team vs. France: Form players rewarded and a welcome return
French media's opinion of this Ireland team becomes clear as vital clash nears
Eight players to watch in tonight's Sigerson Cup semi-finals
Clive Woodward happy to 'eat humble pie' after bold comments about Ireland
Man United vs Leeds: Why the game won't be shown on Irish TV
"I should have been more mature" - O'Sullivan's injury trail a cautionary tale for Sigerson casualties
You may also like
8 months ago
Former Australia cricketer Andrew Symonds dies after car crash, aged 46
11 months ago
Australian cricket legend Shane Warne has died aged 52
1 year ago
Manchester Utd owners weigh up £190million bid for cricket team
1 year ago
The Sun pays damages to Ben Stokes over front page family tragedy story
4 years ago
An emotional David Warner apologises for his role in the ball-tampering scandal
4 years ago
Australian cricket captain admits to trying to cheat during Test match
Next Page