It looks innocuous but turned out to be a terrible injury.

The WWE bandwagon rolled into Dublin on Wednesday and their legions of fans lapped it up. 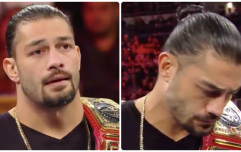 END_OF_DOCUMENT_TOKEN_TO_BE_REPLACED

The night's main event was Seth Rollins taking on Kane, the Undertaker's brother and a man of many faces, and red tights.

The 29-year-old WWE champion was attempting a risky move from the top ropes when he landed awkwardly, reportedly tearing the ACL, MCL and medial meniscus of his knee.

Amazingly, and with due credit to Rollins, he managed to finish out his match against Kane, and win.

It is expected that Rollins will be out of action for anything between six and nine months. His title may now be up for grabs at Survivor Series.


popular
The four stone-cold certainties for All-Stars even as early as this
Kylian Mbappe reportedly wants PSG to sell Neymar
Eamon McGee just couldn't help himself with Armagh-melee tweet
Anthony Joshua admits that he was 'let down by his corner' during Oleksandr Usyk bout
"He's actually smiling putting the ball over the bar. He should nearly be fainting." - Ryall on Limerick's legacy
"The economy was one of the big reasons" - Cadogan's move from an electrician to personal training
Andy Farrell goes for Munster veterans as Ireland team to face New Zealand named
You may also like
10 months ago
CM Punk makes sensational return to wrestling after seven year absence
3 years ago
Conor McGregor calls out Chris Jericho over 'Champ Champ' claim but Y2J wasn't having it
3 years ago
UFC vet Travis Browne punches 'fan' who attacked WWE legend Bret Hart
3 years ago
Former WWE superstar Jake Hager makes successful Bellator debut
3 years ago
Sheffield United striker Billy Sharp pays tribute to WWE legend Mick Foley
3 years ago
Colby Covington wants tag team match against Conor McGregor and Becky Lynch
Next Page