There is nothing to stop the 17-year-old from going far at Flushing Meadows.

Tommy Carr must be fierce proud.

The former Dublin GAA star and football manager of Cavan and Roscommon will be keeping track of events in New York very closely over the coming days as his young son attempts to win the US Open juniors title. 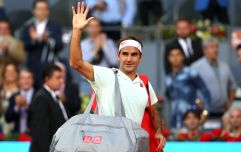 END_OF_DOCUMENT_TOKEN_TO_BE_REPLACED

Simon Carr reached the last 16, on Tuesday, after his 6-4, 6-4 victory over Jaimee Floyd Angele. This is the fourth Grand Slam event the world No.20 junior has competed in this year and this is his best performance.

Up next for the teenage star is Timofey Skatov from Russia. While he should prove a stern test, Skatov cleared a path to the last four by defeating world No.3 Jurij Rodionov in their third round encounter.

Top seed Axel Geller (Argentina) is in the upper half of the draw while Carr would not meet second seed Yibing Wu (China) until the semi finals, should he win his next two matches.

In an RTE feature on Carr, back in 2015, he spoke about his dream of walking out at Wimbledon one day. His father, who won an All-Ireland and two league titles with Dublin during his playing days, says Carr's second sport was GAA but tennis was always his first love.

Two years on and Carr is right on track.