Serena Williams has been handed a $17,000 dollar fine after her reaction to receiving three code violations during last night's US Open final.

Williams lost to Japan's Naomi Osaka in straight sets, but felt that she was unfairly treated and let the umpire know, calling him a 'thief' and telling him that he owed her an apology for costing her a point. 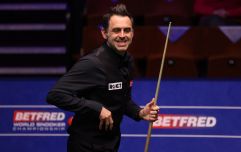 END_OF_DOCUMENT_TOKEN_TO_BE_REPLACED

One code violation was given for receiving coaching instructions from her coach in the crowd, although she insists that she was not aware of her coach making the gesture and told the umpire she "would rather lose" than ever cheat.

In the post-match press conference, Williams claimed that she was unfairly treated during the game and that a male player would not have been punished in the same way.

This was a huge talking point in Williams' defeat https://t.co/ng6wdVPM5F

“I’ve seen other men call other umpires several things,” she said. “I’m here fighting for women’s rights and for women’s equality and for all kinds of stuff. For me to say ‘thief,’ and for him to take a game, it made me feel like it was a sexist remark. He’s never taken a game from a man because they said ‘thief’.

“For me, it blows my mind,” Williams said. “But I’m going to continue to fight for women.”

While on court, Williams pleaded with the tournament referee, Brian Earley, saying: “Because I’m a woman, you’re going to take this away from me?”

Her claims were backed up by former professionals Bille Jean King and Victoria Azarenka. The latter tweeted  “If it was men’s match, this wouldn’t happen like this. It just wouldn’t.”