Ronnie O'Sullivan does most things to entertain himself.

O'Sullivan is way out on his own as the biggest character in the history of snooker and he came out with another unique interview after reaching the quarter-finals of the Players Championship this week.

'The Rocket' had just beaten Barry Hawkins 6-4 when he decided to adopt an Australian accent in his post-victory interview with BBC Lancashire Sport. 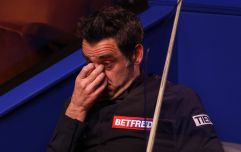 END_OF_DOCUMENT_TOKEN_TO_BE_REPLACED

Somehow, the Essex-born player managed to keep a straight face although his accent began slipping at stages and nobody found it more amusing than O'Sullivan.

"I dip in with a bit of Cockney, a bit of Australian and a bit of Scouse, you know what I mean mate?" he said.

Well, this is surreal ?

It's not the first time that O'Sullivan has given a surreal experience to an interviewer as you may remember that he greeted questions with a sudden chorus of Wonderwall at the Players Championship two years ago.

When asked to explain his Down Under character this week, O'Sullivan said: "I just feel totally positive.

"When you talk Aussie, the Aussies are just winners mate, you know? You've got to love a winner.

"Us English, we love a loser, so I thought I'm fed up of being a loser, I'm going to talk like a winner, like the Aussies. Get the Ashes won, mate."


popular
Six All Blacks but no Ireland players in world's top 20 list headed by Antoine Dupont
Nigel Owens on most annoying players to referee (three of them are Irish)
"I asked one question and lads slagged the arse off me!" - Johnny Sexton on Roy Keane chat
Seamus Coleman gives brilliant post-match interview after Everton beat Arsenal
"Women's rugby deserves better and he's not the man for the job"
Tadhg Furlong gets some love as 2021 'Best XV' debate sparked
"My thoughts were with him initially and that's why I got emotional" - Mulcahy still the man for Kilmallock
You may also like
1 week ago
'Go and get a job' - Ronnie O'Sullivan responds to Shaun Murphy's amateur player comments
1 week ago
Shaun Murphy hits out after defeat to amatuer snooker player at UK Championship
1 month ago
Ronnie O'Sullivan nearly missed start of snooker game due to eating a kebab
1 year ago
It's all going off in Sheffield as Mark Selby slams "disrespectful" Ronnie O'Sullivan
2 years ago
Ronnie O'Sullivan was "struggling to stay awake" during shock defeat to James Cahill
3 years ago
Snooker world champion Mark Williams lives up to naked press conference vow
Next Page