'Snakebite' Peter Wright has done it.

The Scotsman started like a scalded cat in the Alexandra Palace in London, haring into a 2-0 lead in the World Darts Championship final against Michael Van Gerwen, and he barely stopped for breath over the course of ten enthralling sets.

Wright was the better player out there, simple as.

Whereas his Dutch opponent hit in fits and bursts, Wright played with more consistency as his smooth, relaxed style and deadly precision over the doubles took him to the promised land. A first ever World title, annexing the demons of his previous, haunting losses against the green machine, when match darts escaped him.

They wouldn't escape him here. Wright started like a man on a mission, taking out 56 to win the first and he was just as clinical in the second. A 12 dart leg helped him break Van Gerwen there, and he hammered it home to go 2-0 up.

Peter Wright is the Darts Champion of the world

What a performance from the Scotsman

Van Gerwen didn't lie down. The marvellous Dutch man never does, and he found his mojo to ruthlessly rack up two sets on the bounce to put the pressure on Peter Wright.

But he was lapping it up out there. Crucially, he never went behind in the whole game with a 96 finish landing him the fifth set. He extended his lead to two again, when a whitewash sixth set shot him well in front of a clearly rattled Van Gerwen. 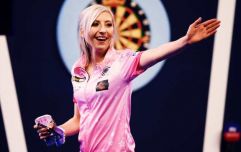 END_OF_DOCUMENT_TOKEN_TO_BE_REPLACED

Mighty Mike kept on beating the door down, but Wright always had the answers. He may have missed doubles once, sometimes twice but he rarely missed them three times and that was how he finished it in the tenth set. Two darts hit double ten on the rims but the final one dropped and he was home.

Shedding the demons of seven lost major finals (out of seven) against MVG in the past, Wright earned it here with an exceptional average of 102, to go with 11 maximums.

The tears in his eyes

You know it's with feeling because before tonight, Peter Wright had played seven and lost SEVEN major finals to MVG.

He wasn't going to lose tonight.

Prior to the game, Van Gerwen had ramped up the tension, warning Wright that he 'has to do better if he wants to beat me,' and that 'against me, he's not allowed to miss.'

Van Gerwen was gracious in defeat, to his credit.

"His finishing was phenomenal. When you don't take your chances against a player like Peter Wright, you're not going to win...Fair play to Peter Wright, all the credit must go to him. He deserved this..."

As for Wright, he was lapping it up out there, and you'd have to be delighted for him.

"I thought to myself 'don't do it again"

You'd have to be delighted for himpic.twitter.com/i5tZKIplBw


popular
We knew Sean O'Brien wouldn't let us down with his Lions XV
'Make him hurt, make him yours' - How the Springboks ruled the world
Jose Mourinho is about to step up and become the hero football needs
Springboks legend Tendai Mtawawira tells us what he really thinks of Ellis Genge
In 86 seconds, Patrick Bamford becomes English football's voice of reason
Saudi prince 'prepares £4bn Manchester United takeover'
Manchester United owners have reportedly set price for sale of the club