Ireland's silver medallist brothers are enjoying some time apart after their Rio 2016 heroics.

Gary O'Donovan is buzzing around Rio; he's everywhere. The Cork rower celebrated his, and his brother's, silver medal win like a champ and then got down to the serious stuff - supporting his Team Ireland colleagues.

He was there when Michael Conlan had a win swiped from him and when Thomas Barr smashed a national record for the second time in three days and narrowly missed out on the 400m hurdles podium. 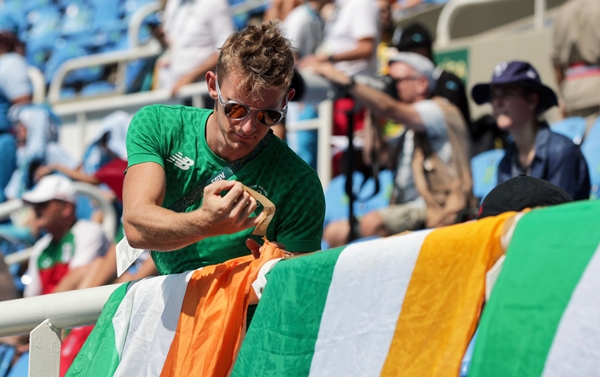 END_OF_DOCUMENT_TOKEN_TO_BE_REPLACED

As for brother Paul, he's off to Rotterdam for the world championships. Having spent a good chunk of his teenage years, and early 20s, as a single scull, Paul O'Donovan is going for world gold in The Netherlands.

After landing in Rotterdam, Paul had a chat with The Irish Times and a couple of excellent lines prove he is just as easy getting interviewed on his own as he was with his brother. Asked if he was tempted to hang around in Rio for the post-medal celebrations, he remarked:

"We’ve had a week of partying in Rio. Sure if we want to drink the shite out of it we can do that at home."

There may well be some drinks taken when the brothers are welcomed at a homecoming in Skibbereen - not far from their Lisheen home - on August 29.

Paul spoke about being recognised by other Olympians in Rio and what it is like being toast of the town.

"I was in the barber here (in Rotterdam), this guy comes over, 'Hey, you’re the guy in the interviews. It’s you!'

"He wasn’t even a rower. Hopefully, it’ll all calm down."

It will calm down in time but that time won't be for a while yet.

Listen to the latest GAA Hour Football Show as we preview this weekend's All-Ireland semi final.


popular
The most Stone Age tackle you've ever seen gets South African lock straight red card
Galway fans' frosty reception for Davy Fitz doesn't make any sense
Michael Schumacher paralyzed and suffering from memory and speech problems
"Johnno went, 'We’re not moving! You're trying to mess us about!'" - Ben Kay recalls red carpet controversy
Ryan Manning hacked to the ground by Henri Lansbury in ruthless assault
'Brian was a genius... he would've killed you to even win a game of touch'
Final question of Ryder Cup press conference has Team USA in all sorts of trouble
You may also like
2 years ago
Military coups, AK47s and gold medals - the remarkable story of how Ben Ryan guided Fiji to Olympic Sevens glory
3 years ago
Mick Conlan reveals Instagram message from man who robbed him of Olympic medal
3 years ago
Michael Conlan's embracing the lowest point of his career and making it his own
4 years ago
WATCH: O'Donovan brothers had a Hollywood actress entranced on The Graham Norton Show
4 years ago
WATCH: Ireland's bittersweet sporting year summed up perfectly by top betting surprises
4 years ago
Michael Conlan makes it clear to AIBA how much he is willing to pay them
Next Page