Fintan McCarthy and Paul O'Donovan may have urged the nation to stay in bed and catch the re-cap in the morning, but thousands upon thousands of us will blithely ignore that advice.

The Cork duo are into the final of the Lightweight Men's Double Sculls after finishing first in their semi-final, earlier today, and razing the competition. They finished over two seconds clear of the Italian pair and over seven seconds faster than the third placed Belgians.

END_OF_DOCUMENT_TOKEN_TO_BE_REPLACED

The final will take place at 9:50am local time [1:50am Irish time] and will be live on RTÉ 2. "I told then go to bed, and here ye are putting more stuff on the television for them to watch," O'Donovan remarked. "That's no good. They should be asleep!" 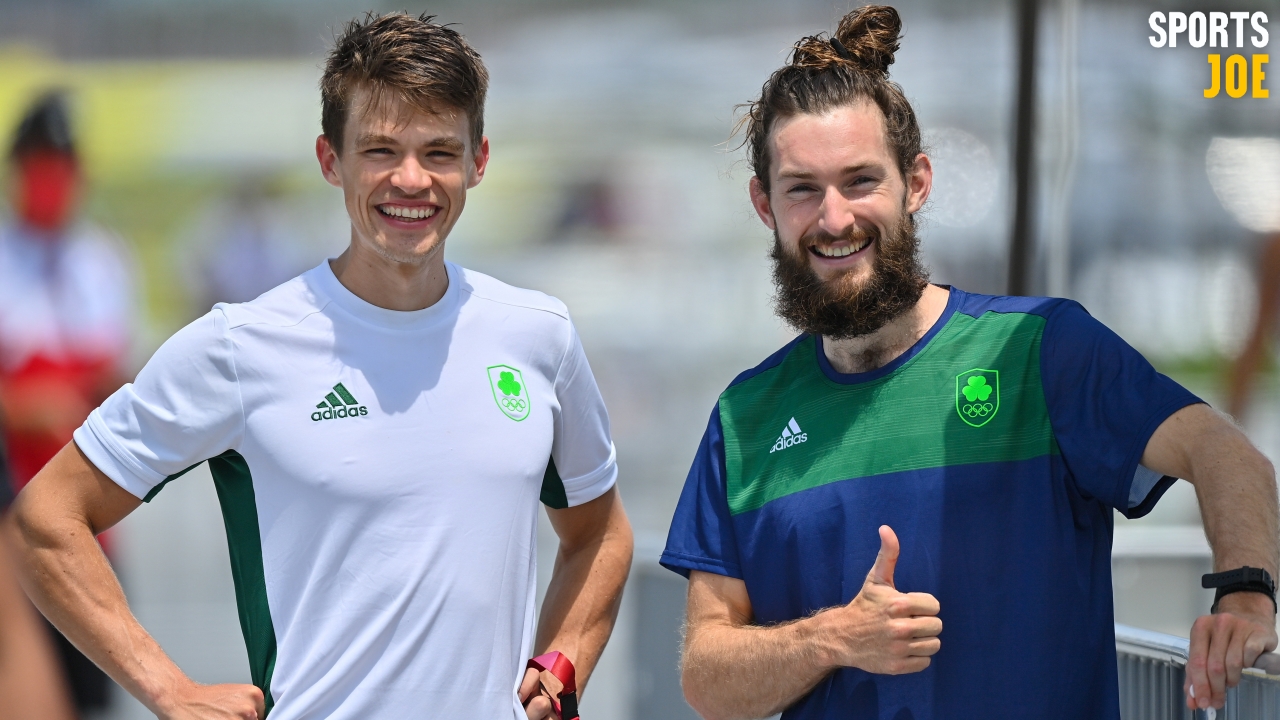 Fintan McCarthy, left, and Paul O'Donovan of Ireland are in lane three for the final of the Lightweight Men's Double Sculls. (Photo by Seb Daly/Sportsfile)
Advertisement

Mid-way through their live interview with Claire McNamara, McCarthy and O'Donovan were interrupted by a Croatian rowing crew that were walking through the media zone.

One of the Croats stuck his head in between the Irish lads and cracked a joke before his teammate called out, "Well done guys."

The chap that originally crashed the party called back, "Good luck tomorrow" as he strode off, getting a thumbs up and similar wish in return.

END_OF_DOCUMENT_TOKEN_TO_BE_REPLACED

Asked for their plans to get ready for the final, O'Donovan said it was a case of 'get the bus home, have the lunch and then the supper after that'.

"A game of Scrabble maybe," he added. "The lads are teaching me how to play that. I'm not too good with words, so I'm learning all the time."

END_OF_DOCUMENT_TOKEN_TO_BE_REPLACED

The Germans and Italians will pose the biggest gold medal threat, in the final, but there will be no Norwegian team after they finished last in their semi. Highly fancied heading in, the pair's both tipped over and both men fell into the water.

They eventually got back in the boat and finished over six minutes after the other five boats.

"We saw the Norwegians fell out in the race before us but I think that, in part, it's because they were out partying last night," quipped O'Donovan. "They were a bit shaky this morning."

On Wednesday morning, another medal will hopefully be bagged by Paul O'Donovan and Fintan McCarthy.


popular
Roy Keane flatly rejects longstanding perception of ex-Man United midfielder Paul Ince
Sean Dyche set to be named Everton manager after Marcelo Bielsa talks break down
Allianz National Football League Round 1: All the action and talking points
Conor McGregor hit by car ‘at full speed’ while cycling
Roy Keane leaves ITV pundits in stitches after Pep Guardiola's pre-match interview
Quiz: Identify these 15 football clubs that are not named after a place
"I don't like to fill my time that way" - O'Hora going his own way in an era of obsessives and covering all bases
You may also like
1 year ago
"I'm really passionate about getting it up and off the ground" - Kellie Harrington plans to open boxing gym
1 year ago
"You can have all the money in the world and still be a shit athlete. I just want to be the best"
1 year ago
Olympic Silver Medalist reveals she was pregnant during Tokyo 2020
1 year ago
Boxing investigation finds at least seven suspicious results at Rio Olympics
1 year ago
Kellie Harrington makes her decision between turning pro or staying amateur
1 year ago
"I’ve had some offers" - Kellie Harrington weighs up her options of turning professional or staying ameatuer
Next Page