'If that evidence is insufficient, then he won't be treated any different to anyone else'

Novak Djokovic has been told by the Australian prime minister that he will "be on the next plane home" if he is unable to provide "acceptable proof" as to why he hasn't received a Covid-19 vaccination.

Djokovic has refused to confirm whether he is vaccinated or not on a number of occasions, leading to doubts over whether he would participate at the Australian Open given the country's strict vaccination policy.

Happy New Year! Wishing you all health, love & joy in every moment & may you feel love & respect towards all beings on this wonderful planet.

I’ve spent fantastic quality time with loved ones over break & today I’m heading Down Under with an exemption permission. Let’s go 2022! pic.twitter.com/e688iSO2d4

The decision to allow the Serbian to enter the country has been met with widespread criticism from Australians, who have labelled the decision as a 'slap in the face' after being forced to live through several strict lockdowns throughout the pandemic.

When questioned over whether Djokovic's proof of exemption would be deemed acceptable, prime minister Scott Morrison insisted that the world number one won't be given any special treatment when it comes to entry requirements.

"Any individual seeking to enter Australia must comply with our border requirements," he said, as reported by Sky News.

"He has to because if he's not vaccinated, he must provide acceptable proof that he cannot be vaccinated for medical reasons and to be able to access the same travel arrangements, as fully vaccinated travellers.

"So we await his presentation and what evidence he provides to support that. If that evidence is insufficient, then he won't be treated any different to anyone else and he'll be on the next plane home.

"There should be no special rules for Novak Djokovic at all, none whatsoever."

The nine-time champion may face a serious hitch when he lands in Melboune, though, as Labour MP Jaala Pulford says the tennis star will not be getting 'individual visa application support' to enter Australia.

It's 1.50am in Melbourne and the nine-times Australian Open champion appears to be still at the airport and locked in talks with border officials about being let into Australia. 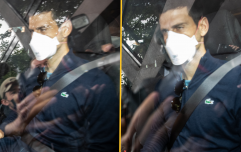 END_OF_DOCUMENT_TOKEN_TO_BE_REPLACED

Meanwhile the head of the Australian Open, Craig Tilley, says he understands the reaction, but reiterated that Djokovic has no legal obligation to reveal whether he is vaccinated or not.

He said: "We completely understand and empathise with ... people being upset about the fact that Novak has come in, because of his statements over the past couple of years around vaccination.

"However, it's ultimately up to him to discuss with the public his condition, if he chooses to do that, and the reasons why he received an exemption."

The Australian Open is due to begin on January 17 in Melbourne.


popular
Andy Moran reveals which former Mayo teammate was the ultimate team player
Paul Galvin is not one bit impressed with the new Kerry jersey
"It’s hard not to respect Johnny, even if you don’t like him!" - Dan Biggar
QUIZ: Which is the correct GAA crest?
QUIZ: Name the 25 clubs relegated from the Premier League more than once
Craig Dias on club All-Ireland run, winning Leinster, and making his second debut for Dublin a decade after his first
Kieran Trippier pinpoints Daniel Levy's biggest transfer mistake