He's so accurate he can hit one dart with two darts.

That's Michael van Gerwen. He lands a dart onto the treble 20 and he hits the other two right off the same flight.

That's consistency for you.

The world number one was put to the pin of his collar on Saturday night in the PDC World Championship semi-final. Rob Cross was on fire, he held his holding throw every set for four sets and, even when van Gerwen eventually broke him to go 5-4 ahead, Cross broke the champion right back in turn.

At 5-5, at a playoff, with sudden death looming, this was a nerve-jangling, breathtaking classic.

Still, for all the external interferences, for all the boos from the crowd, the misses from the Dutch man, it seemed like van Gerwen would find a way back. He always does in fairness.

But, after all the sweat and hiccups and sweat and cockups and sweat, this time, the best darts thrower in the world had no answer.

It got to a stage where neither Cross or van Gerwen seemed like they'd go and win the game. It didn't look possible. The English native missed a bull to clinch the tie. And van Gerwen? He missed five darts for a checkout. When would you ever see the like of it?

What the hell just happened? https://t.co/AE9hiXAi8q 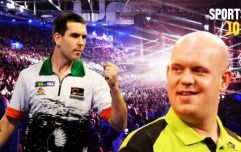 END_OF_DOCUMENT_TOKEN_TO_BE_REPLACED

As it was, the champion's night was probably summed up with one leg in the eighth set when he had the accuracy and conviction for another treble 20 - the only problem was that it was just too accurate.

Two of van Gerwen's darts bounced off his first dart and he had to make do with 60.

All he could do was smile as the crowd, who had painted him as the villain of the evening, jumped up and down in celebration.

HAVE YOU EVER SEEN THIS BEFORE!?

That's the price you pay for being the best. But what happened with those darts is just freak bad luck.