James Wade would have anticipated some boos when he took to the oche for his clash with Keegan Brown on Sunday.

But the level of hostility clearly came as a surprise for 'The Machine', who has come in for criticism over his behaviour in the previous round.

Wade's aggressive behaviour against Japan's Seigo Asada last week were branded "thuggish" by Wayne Mardle, who said: "That's just not on. The intimidation, being overly aggressive. That is putting yourself upon someone. That's bullying and that's just nasty."

Wade, who suffers from bipolar disorder, apologised the next day and put his actions down to a hypo-mania episode.

Some bizarre post-match comments from James Wade after his tie-break win over Seigo Asada.

There was little sympathy in Ally Pally for his next match though as the crowd threw their backing behind Keegan Brown from the outset.

A remarkable comeback was required from Wade, who fought back from 3-1 down to win 4-3 and secure a spot in the last 16, but he admitted after the match that the reaction almost forced him off the stage.

JAMES WADE COMPLETES THE COMEBACK | The Machine overcomes a hostile environment to defeat Keegan Brown and book a spot in the last 16#WHDarts pic.twitter.com/qUh5woNLqG 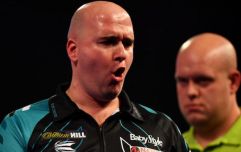 END_OF_DOCUMENT_TOKEN_TO_BE_REPLACED

He said: "At one point I was close to walking off because I couldn’t handle it, and I felt I was being judged on something that isn’t me or the person I am, but the crowd obviously felt I had something to answer for.

"At the end, I was simply saying ‘Sorry’ and ‘Thank you’ to the crowd. I took my punishment, and it could be deemed as bullying what happened to me today.

"But right now I am probably the happiest man in darts. I was never down and out, I was only battling myself."

popular
The SportsJOE 12 o'clock quiz | Day 76
SportsJOE 2000s Football Quiz | Round 4
The SportsJOE 12 o'clock quiz | Day 75
The controversial reason Conor McGregor's win over Nate Diaz was not unanimous
UFC heavyweight Brendan Schaub claims he was too much man for Ronda Rousey in relationship
UFC 197 salaries revealed and Jon Jones earned a whole lot more than everyone else
SportsJOE 2000s Football Quiz | Round 3
You may also like
2 years ago
The astounding check-out that transformed van Gerwen-van Barneveld into an instant classic
2 years ago
Brilliant Jamie Lewis knocks second seed Peter Wright out of the World Championship
2 years ago
Brazilian crowd erupts at their Ally Pally history maker, but brave Peter Wright deserves huge credit
2 years ago
South African darts player steals the Ally Pally show with slick dance moves during walk-on
2 years ago
Steve Lennon goes down fighting and Irish fans are convinced there are bright days ahead
2 years ago
Mark Webster beaten by 63-year-old Paul Lim in World Darts Championship shocker
Next Page