The Tallaght native was a genuine medal hope, heading into the games.

The mind and body were right, says Jack Woolley, but it was a different story up on the mat. He just did not have his 'A' game when it counted.

In a back-and-forth Taekwondo 58kg contest, at the Olympics, Woolley fell behind in the second round only to edge ahead of his competitor, Lucas Guzman of Argentina.

END_OF_DOCUMENT_TOKEN_TO_BE_REPLACED

Woolley connected with a head-kick and looked set for a quarter final berth, but lost out with seconds to spare when the Argentine landed a trunk kick.

The 22-year-old, who had three gold medal wins at Opens over the past two years, immediately sank to the mat as his Olympic dream ended, all too early. 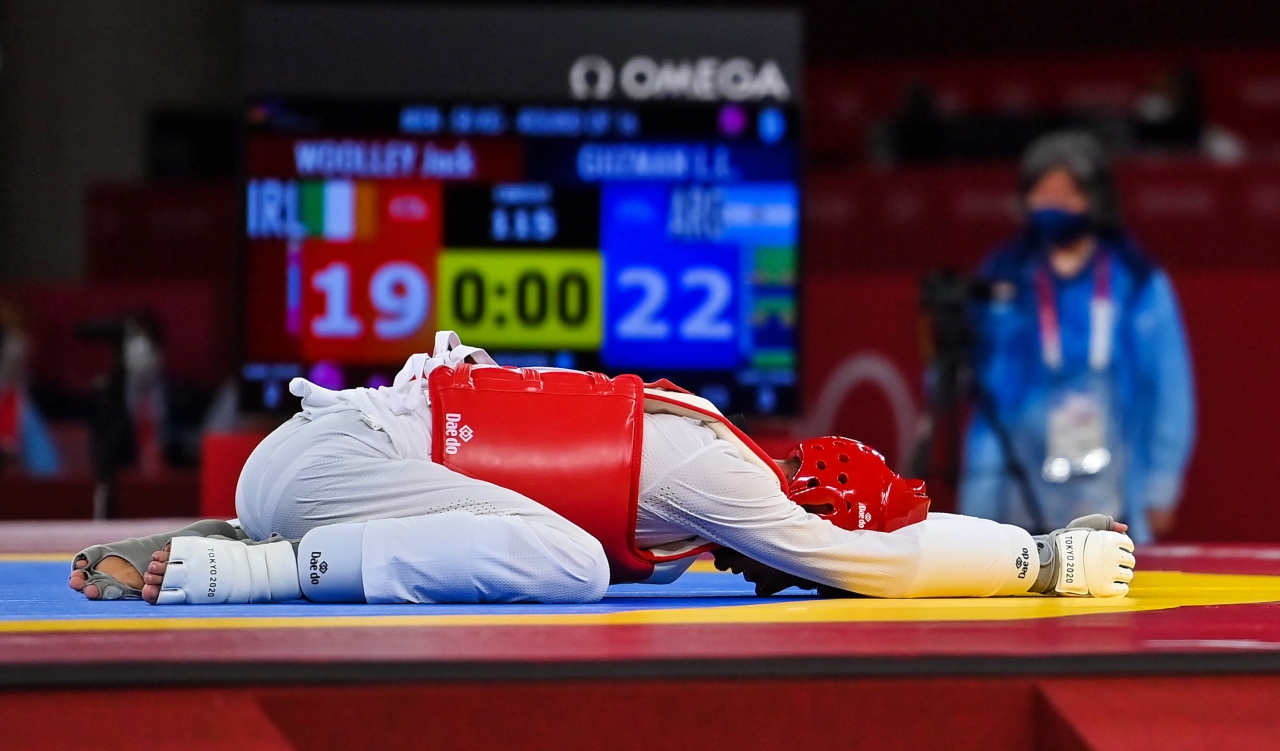 Jack Woolley reacts after defeat to Lucas Lautaro Guzman of Argentina in the men's -58Kg taekwondo round of 16 at the Makuhari Messe Hall during the 2020 Tokyo Summer Olympic Games in Tokyo, Japan. (Photo by Brendan Moran/Sportsfile)

There was still the hope that Woolley would get a reprieve, and a chance to fight for a bronze medal, if Guzman could make the final, but he lost in the semis and that was that.

The Team Ireland star went to talk with RTÉ's Paul Flynn and was composed for the first few moments until he began to give his take on matters. Then, reality hit like a tonne of bricks.

"I'm devastated. It's tough to take and it will be. Some people have come here to participate at an Olympics, I came here to win...

"I'm devastated with my performance, everything was mentally great, physically great. I stepped on the mat, and it wasn't my day."

"We had this game-plan and I went out and my legs went to jelly," admitted a tearful Woolley. "It just didn't go to plan. I'm usually a lot more aggressive. I don't know. It's just... something just didn't click."

'Some people have come here to participate at an Olympics, I came here to win'
A 'devastated' @jackwoolley_tkd speaks to @OFlynnPaul#tokyo2020 #olympics #rtesport
📺Watch Tokyo 2020 live - https://t.co/b2OI4OoWVJ
📱 Report - https://t.co/SgbVNe935i pic.twitter.com/SSg9eGb3P9

END_OF_DOCUMENT_TOKEN_TO_BE_REPLACED

"I'm trying not to cry on the telly," said Woolley as he battled on to complete the interview.

Flynn sought to get Woolley, who was Ireland's first ever Taekwondo representative, to focus on the positives but he was caught up on 'letting a lot of people down'.

Woolley is certainly young enough and talented enough to come back and give it another crack at Paris 2024. Hopefully this is not the last we hear from the Jobstown lad.