"Hopefully it gives young girls real hope that anything is possible. If we can do it, anyone can!"

Aifric Keogh, Eimear Lambe, Fiona Murtagh and Emily Hegarty are Olympic bronze medalists and the first ever Irish women to claim a rowing medal at the games.

The Irish quartet pulled off a blitzing finish to climb from fifth to third and take home the bronze, pipping Great Britain in the process.

END_OF_DOCUMENT_TOKEN_TO_BE_REPLACED

The final of the coxless fours was won by Australia, who got to the finish line 0.4 seconds ahead of The Netherlands. At the halfway mark, after 'a rocky start', the Irish team were in fifth, but they upped the stroke-rate and went for it.

They powered past the Chinese team and then had Team GB in their sights. It was tight as could be over the last 400 metres but Keogh, Lambe, Murtagh and Hegarty were not to be denied. They had their opponents' number, though, and would claim the bronze with a second to spare. 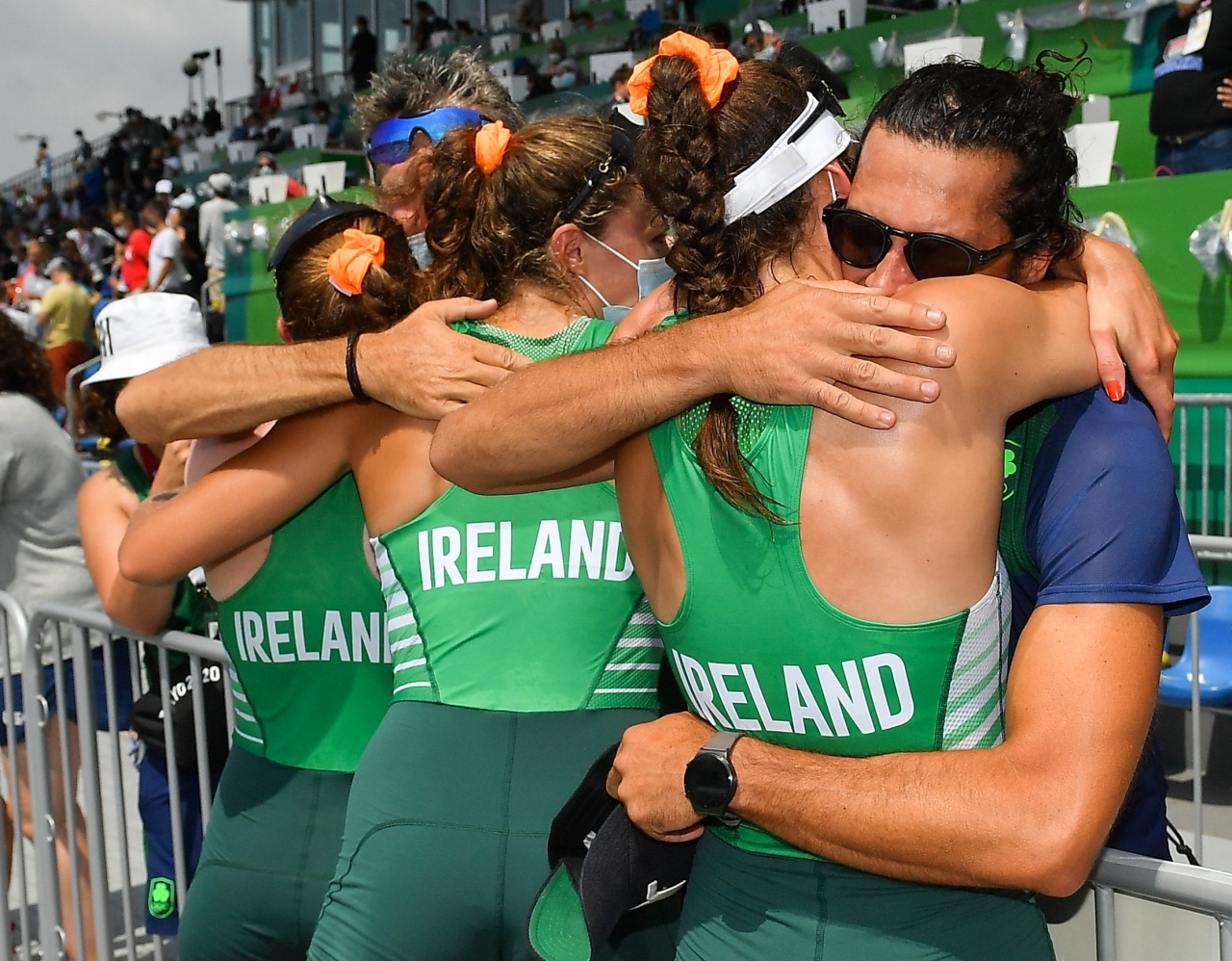 There were ecstatic scenes in the water, and when they got back to celebrate with their coach and members of Team Ireland.

Following the race, Lambe said, "We knew we had a chance going into [the final], definitely, and we a bit of a rocky start there, so we didn't make it easy for ourselves, but we never gave up."

"It's a bit surreal," Hegarty added. "it's something for the future and hopefully this will be the first of many, and it gives the young girls, coming up now, real hope that anything is possible. That if we can do it, anyone can."

END_OF_DOCUMENT_TOKEN_TO_BE_REPLACED

Eimear Lambe's older sister, Claire, was part of the first Irish women's crew to make an Olympics final, at Rio 2016. "She was an inspiration for me, growing up," she declared, "as I knew what was possible."

Elsewhere at the Sea Forest Waterway, Fintan McCarthy and Paul O’Donovan steamed into the Lightweight Men’s Double Scull Final after winning their semi in a rapid time of 6:05.33, two seconds clear of Italy. That 'A' final takes place on Thursday.


popular
World Cup 2022 Day 14: All the major action and talking points
Shay Given on how far Ireland could've gone at the 2002 World Cup with Roy Keane in the team
From Ireland to Argentina: Alexis Mac Allister's Irish roots explained
Ronaldo finally reveals why he got that hideous haircut
The story behind Nate Diaz's backstage scuffle with Clay Guida's team during UFC 199
There's one notably low payout on the UFC Orlando disclosed salaries
Patrice Evra 'likes' photo of Luis Suarez in tears after World Cup exit

You may also like
1 day ago
Shay Given on how far Ireland could've gone at the 2002 World Cup with Roy Keane in the team
2 days ago
From Ireland to Argentina: Alexis Mac Allister's Irish roots explained
1 week ago
Former England international admits he wishes he had played for Ireland
1 week ago
Ronan O'Gara confirms he is on shortlist for England head coach job
1 week ago
Alternative World Rugby Dream Team selected, with two extra Ireland stars
1 week ago
"Two Irish players are best in the world" - Rugby reacts to big Josh van der Flier and Terry Kennedy awards
Next Page