'Christ almighty, what are you doing?'

Gerwyn Price's colourful campaign at the PDC World Darts Championship is over. He picked a memorable way to go, at least.

The No.1 seed, who earlier in the tournament forced Sky Sports to apologise for some unfortunate and grim gestures during a win over Jose de Souza, took his antics to a strange new level.

The Welshman was already trailing German player Gabriel Clemens at the mid-session interval when he returned to finish out the quarter final wearing noise-cancelling headphones. It was certainly... different.

Gerwyn Price is BLOCKING out the crowd noise...👀🎧 pic.twitter.com/Ns9pgCxkNt

Reaction to Gerwyn Price and his headphones 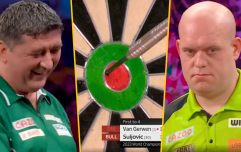 END_OF_DOCUMENT_TOKEN_TO_BE_REPLACED

Ahead of his victory over Raymond von Barneveld, Gerwyn Price had told reporters that he had been practising with ear plugs so that he could block out unwelcome crowd noise, if needed.

Trailing 3-1 to Clemens, he went all-in and returned to the oche wearing the oversized and noise-cancelling headphones. Needless to say, Twitter does what it so often does best and got some cracking reactions out:

There’s been a red card but for who Gerwyn Price? pic.twitter.com/hlTZg78h0P

Gerwyn Price wears ear protectors on the oche of his quater-final tie with Gabriel Clemens to drown out the noise (and jeers) of the crowd at Ally Pally #darts pic.twitter.com/E2gIxKSFCJ

Gerwyn Price coming out for set 5 after the headphones didn’t work pic.twitter.com/j73Rx6EdlC

With the crowd at Alexandra Palace now in a tizzy, and Clemens locked in to what would be the biggest scalp of his career, to date, Gerwyn Price and his headphones could not get it going.

Like Radioactive Man and his goggles, the headphones did nothing.

Clemens went on to close out the game, 5-1 and become the first German to ever make the PDC World Darts Championship semi-finals. As for Price, he had a swift and salty reaction, over on his Instagram account:

'So frustrating. You play all year round preparing for one tournament. So gutted I wasn't let play, but good lick everyone left in.

'Not sure I will ever play in this event again.'

If they made a loveofhuns for men, Gerwyn Price would be number one. This is out-and-out HUN behaviour. 👑 pic.twitter.com/8eceD1Hqnp

We must hand it to the darts - it always delivers.


popular
Man United could be blocked from playing in the Champions League next season
Ireland team vs. France: Form players rewarded and a welcome return
French media's opinion of this Ireland team becomes clear as vital clash nears
Man United vs Leeds: Why the game won't be shown on Irish TV
Eight players to watch in tonight's Sigerson Cup semi-finals
Clive Woodward happy to 'eat humble pie' after bold comments about Ireland
"I should have been more mature" - O'Sullivan's injury trail a cautionary tale for Sigerson casualties
You may also like
1 year ago
Peter Wright's post-match comments on Michael Smith deserve to be recognised
1 year ago
"If we all have to be in hotels next year, I won't be in the tournament" - Peter Wright
1 year ago
Gerwyn Price cuts through the bull as World Darts Championship suffers another Covid withdrawal
1 year ago
Michael Van Gerwen reacts after Covid withdrawal from World Darts Championship
1 year ago
Raymond van Barneveld warns PDC organisers after testing positive for Covid-19
1 year ago
Irish player Keane Barry records first ever win at PDC World Championship
Next Page