"Look at his face. LOOK AT HIS FACE!"

Heading into his match against Mensur Suljovic, for a place in the last 16 of the World Darts Championship, Michael van Gerwen was conscious of the high profile carnage across the main draw, at Alexandra Palace.

In the space of 24 hours, past, multiple world champions Peter Wright, Gary Anderson and Raymond van Barneveld had all been eliminated. Still, the Dutch maestro was undeterred. 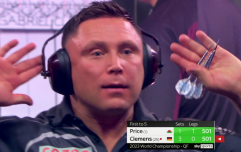 END_OF_DOCUMENT_TOKEN_TO_BE_REPLACED

“I’ve been preparing myself really intensely over the last few weeks," he stated, "and you want to show your best because on this stage you cannot fail and you can’t make mistakes. People know what I’m capable of and I’m feeling comfortable, and at this stage of the tournament that is really important.

"I want to win this tournament. That’s the standard I have created for myself. I know I’m capable of doing that.

"It puts more pressure on my shoulders, the target on my back is bigger, but it also makes my belief bigger. I believe in my own ability and I’m looking forward to the next one.”

The three-time world champion was primed for the best Mensur Suljovic could throw at him, and that is what he got.

'MVG' took the first two sets, with some ridiculously high scoring, before Suljovic tagged him back with a 3-1 set. Van Gerwen rallied to take the next and looked set to close out the match in the fifth set. He had just 121 left to knock off, while the Austrian was on 261. 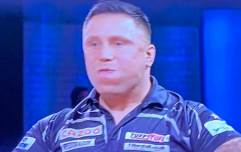 END_OF_DOCUMENT_TOKEN_TO_BE_REPLACED

After Suljovic got his tally down to 161, van Gerwen must have felt he had room to manoeuvre, despite the commentators declaring 'it's not beyond the realms of possibility that Mensur can do something ridiculous'.

Van Gerwen hit single 20 and triple 17 to give himself a chance to close out the set, and match, with a bullseye. Instead - and the TV cameras even missed this - he threw for 18 to leave himself a double 16 on his next (intended) go.

Boos rang out around Ally Pally, with many fans incredulous that the multiple world champion had not gone for the jugular. Suljovic was handed a lifeline and he greedily grasped it.

'The Gentle' stepped up and nailed triple 20, triple 17 and bullseye to send Ally Pally into hysterical raptures. "That is insane," the commentators proclaimed, "that is insane... that is one of the most ridiculous things I have ever seen."

Michael van Gerwen declines a dart at the bullseye and Mensur takes out 161 to clinch the set!

END_OF_DOCUMENT_TOKEN_TO_BE_REPLACED

Only Michael van Gerwen himself will be able to say what was truly going on in his head as that bullseye was perforated by Suljovic.

In a true mark of a champion, though, he shook that set off and took the sixth 3-1 to win the match 4-2. There was a warm handshake at the end as the commentator crowed, "Michael van Gerwen knows he was involved in some kind of darting battle there."

He sure was. He still has four battles left if he wants to win that fourth world title.