There can be no question. That is the greatest leg the sport has ever seen.

Michael Smith and Michael van Gerwen went dart for dart in the third leg of the second set of this World Championship final as, for one of the first time in darts history, less than 20 darts were thrown by the two players.

It's as simple as this. 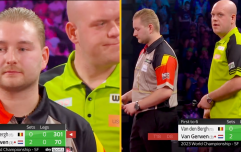 END_OF_DOCUMENT_TOKEN_TO_BE_REPLACED

Michael van Gerwen, the heavily fancied Dutch man missed double 12 by a whisker to miss out on a nine dart finish but, having followed him throw-for-throw, Michael Smith nailed the double 12 to take his opportunity.

In that second set, Michael van Gerwen averaged 121 but to underline the standard of darts being thrown, it won him just a leg. Smith on the other hand, averaged a cool 127.

"I have never seen the like," said Mardle in the Sky Sports commentary box.

There can be no question.

That is the greatest leg in darts historypic.twitter.com/nkmcPgCiRC


popular
Man United could be blocked from playing in the Champions League next season
Ireland team vs. France: Form players rewarded and a welcome return
French media's opinion of this Ireland team becomes clear as vital clash nears
Eight players to watch in tonight's Sigerson Cup semi-finals
Clive Woodward happy to 'eat humble pie' after bold comments about Ireland
Man United vs Leeds: Why the game won't be shown on Irish TV
"I should have been more mature" - O'Sullivan's injury trail a cautionary tale for Sigerson casualties
You may also like
1 month ago
"One of the most ridiculous thing I've ever seen" - Michael van Gerwen booed, then stunned in incredible sequence
1 year ago
"If we all have to be in hotels next year, I won't be in the tournament" - Peter Wright
1 year ago
Gerwyn Price cuts through the bull as World Darts Championship suffers another Covid withdrawal
1 year ago
Michael Van Gerwen reacts after Covid withdrawal from World Darts Championship
1 year ago
Raymond van Barneveld breaks down in front of our very eyes
4 months ago
'The Irish are coming!' - Paul O'Donovan and Fintan McCarthy win world championship gold
Next Page