For over 30 kilometres, it looked for all the world like the Donegal native was in contention for a medal at the European Championships in Berlin but a myriad of circumstances conspired to see him fall out of the podium reckoning. Nonetheless, he had the country in awe at his performance.

A 19th place finish in the 50km walk on Day One of the European Championships was just three places off the 31-year-old's record in 2014 in Zurich.

A time of 4:02:14 was just over 10 minutes longer than what he did in Switzerland four years ago but he was coming into this race with just three weeks of walking under his belt so all he was really looking for was positives.

"Aerobically, I knew we were fit but there was just a question mark over whether the legs could withstand the last part of the race," he said afterwards.

"We decided to go off strong, go out positive for the first 30k because, regardless, you're probably going to struggle anyway."

Under the baking German sun, athletes were dropping out and not completing the race but, despite a blistering start, Boyce kept ploughing on. 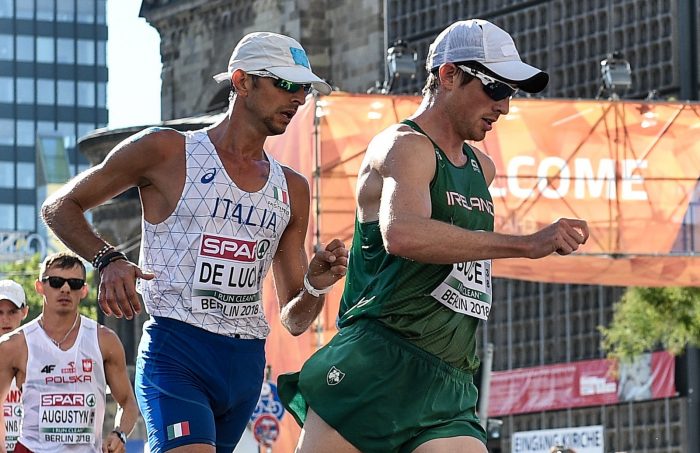 Pushed on by support from around the world, every time anyone tweeted or put the hashtag #UpBoyce on Instagram, the two-time Olympian was feeling that push with a vibration on his watch.

"It's hard to quantify what you're feeling when you see everyone else in the race is suffering," he admitted.

He kept going though, kept pushing and, in his own words, kept driving on.


popular
Gatland comments give insight as to why CJ Stander missed Lions call
The Garry Ringrose narrative around the Lions Tour is complete bull
The SportsJOE 12 o'clock quiz | Day 347
The SportsJOE 12 o'clock quiz | Day 346
"Original Conor McGregor" Nick Diaz recounts heartwrenching story of his girlfriend's suicide
'Jesus Christ! How am I going to put up with this lad for nine weeks?!'
Six months after Michael Venom Page's flying knee fractured his skull, Evangelista Santos retires
You may also like
2 months ago
When Phil Healy starred in the best comeback of all time featuring the greatest commentary ever
1 year ago
'External pressure is a real concern for a lot of athletes. What will people think?'
2 years ago
Amazing display of courage as badly injured NUIG athlete hobbles to second place finish
2 years ago
Usain Bolt nets his first official goals in professional football
2 years ago
This is what Thomas Barr eats on race day, compared to a regular training day
2 years ago
Peter Collins follows through on Sonia O'Sullivan bet after Thomas Barr bronze
Next Page