Andy Murray pulls off Olympic gold... but everyone just cried about missed sleep

The four-hour encounter saw both men dig deep in the Rio heat. Serves were frequently broken as Murray eventually took a 3-2 lead in the fourth set before claiming victory.

It was an incredible win for the Scotsman, enjoying an incredible year following final appearances at the French and Australian Opens, along with his Wimbledon victory over Milos Raonic.

John Inverdale (BBC) says to Murray that he's the first to win 2 Olympic tennis golds. Murray's response:"Venus and Serena have won 4 each."

There was just one small problem with Murray's win.

With the Olympic final match a best of five sets occasion like many Open Finals, Murray's four set victory over Del Potro didn't conclude until 1.04am GMT.

Presenting "Tale of a Tennis Fan: Descent into Madness".

Wait... the tennis final is a best of FIVE SETS? Lol ok mate. Bedtime. I'm not young anymore and this isn't the 2012 US Open

Realistically, anyone who has ever watched an Andy Murray match should have known that he'd find a way to make this a 5-setter. 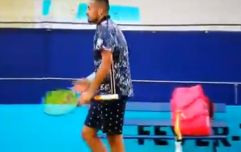 END_OF_DOCUMENT_TOKEN_TO_BE_REPLACED

Still, the match was a fitting conclusion to a wonderful tennis tournament in Rio. Of course, while fans were tired watching, it doesn't quite compare to how tired Murray must have been playing.

And with Murray saying "Who knows about Tokyo? At 33, I'm not sure I'll be at the same level", this may just be one of the last times we get to savour a late night tennis win with the Great Scot.

Unless the US Open serves up something like the 2012 final again...

So glad I stayed up to watch the Olympic Tennis finals.. What a match!! Massive congrats to Andy Murray 😁
Now time to sleep haha 💎💤

Listen to The GAA Hour podcast with Colm Parkinson. Subscribe here on iTunes.

popular
The SportsJOE 12 o'clock quiz | Day 76
The SportsJOE 12 o'clock quiz | Day 75
SportsJOE 2000s Football Quiz | Round 4
Shaquille O'Neal is now a part-time police officer in Florida
Floyd Mayweather now talks about Conor McGregor completely differently
Promoter teases Pacquiao-GGG superfight, but fans are having none of it
Anthony Joshua's nutrition guru reveals his diet through fight camp
You may also like
1 year ago
Andy Murray says he is "pain free" after hip operation
1 year ago
Serena Williams at the centre of Nike's advert on women in sport
1 year ago
Bradley Wiggins has a crack at Wimbledon and 'elitist' sports
1 year ago
Serena Williams handed hefty fine following US Open final
1 year ago
Serena Williams accuses umpire of sexism after receiving three code violations
1 year ago
Aliza Cornet given slap on wrist for changing her shirt on court
Next Page