A hamstring injury is threatening her participation against Mayo in next Sunday’s TG4 All-Ireland SFC semi-final at Croke Park, but 14 years on from her last time supporting Galway at the venue, Fabienne Cooney is desperate to play her part.

Cooney (28) sustained the injury at training in the week leading up to Galway’s quarter-final victory over Waterford, which was her first time not being involved all year.

But with local rivals Mayo providing the opposition in an historic double-header at Croke Park, she hopes to be back in contention.

Sunday’s game (2pm) will be the fourth meeting of the sides this year and on all three previous occasions, Cooney has been handed the duty of marking Grace Kelly, The Croke Park/LGFA Player of the Month for July.

Kelly’s wonder goal in the drawn Connacht final is the only score she managed against Cooney from open play this year, and the Claregalway player hopes she will be deemed fit enough to continue her good recent run.

“I’m trying to do everything I can to get back involved to play some part in the game,” said Cooney, a PE and geography teacher at her local school, Coláiste Bhaile Chláir. 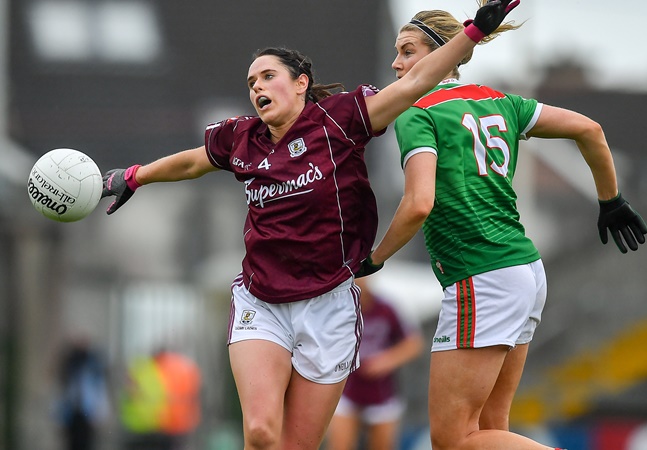 “It was in training in the week before the Waterford game (when) it happened. I have suffered with injuries in the last few years, since I did my cruciate back in 2012. Since that, there has been something each year.

“But this year has been the best, I’ve played every game in the League, and didn’t suffer with any injury, which was huge for me personally. I was going well in the Championship too until that little blip. I should be back to normal training and be able to tog out, definitely.” 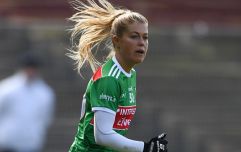 Previewing another huge weekend in the ladies football championship

END_OF_DOCUMENT_TOKEN_TO_BE_REPLACED

Sunday will very much be a family affair for the Cooneys. As well as left corner-back Fabienne, the left half-back position will likely be filled by her younger sister, Charlotte. Perhaps we’ll even see the two Cooneys marking the two Kelly sisters– Grace and Mayo captain Niamh – at some stage.

But it almost feels like second nature for Fabienne to have her sister Charlotte's back. Two years separate them in age and having each other to lean on is a massive comfort, she says.

“I grew up playing with her all along so I know what she is going to do. It’s just instinct at this stage, you don’t really think about it.

“It’s a lot easier playing with someone when you know what they’re going to do and how they’ll react in certain situations. How we deal with it some days is if one of us is not having a good game, you can feed off each other.”

While the maroon shirt is cherished in the Cooney household, it wasn’t always that way. Born in Castlerea Co. Roscommon, they were reared on the achievements of the men’s teams in primrose and blue. Their love for the Ladies game only flourished when they started playing with the Claregalway ladies and they were brought along to the TG4 All-Ireland Finals in 2004 and 2005 – the last time Galway played in Croke Park.

“I was at the final in ’04. I had just started playing football at that stage. We had just moved to Galway at that point – I’m a Rossie by blood!

“We got the bus up to the game. That time there was no real media coverage of the games, I wouldn’t have known the players at all, but I would have been able to tell you every one of the player on the Roscommon men’s team though!

“There wasn’t too much hype about it but I remember the occasion and being there, thinking: ‘could that be me someday?’ They were there again the next year, but it’s crazy to think that was their last game in Croke Park.”

None of this Galway team have played at Sunday’s venue, so it will be a momentous occasion for the experienced and fledgling members of the squad. And facing a familiar opponent is comforting.

“There is not much between ourselves and Mayo at all. There was only a few points in it during the League, then we drew with them in the first game of the Connacht final, and the second game it was tight again.

“At this stage, we have played each other so often it’s going to come down to the performance on the day and who is going to work the hardest and who wants it the most. It’s probably going to be all about the top six inches really, that will decide who will come through.

“For last year’s semi-final against Dublin, we were really confident going into the game. We didn’t get off to a great start and that was probably the losing of it overall.

“For it to end the way it did was very disappointing. We want to learn from that and try and rectify that and go one step further.”


popular
Carragher pushes all the right buttons and Keane delivers in gold
Jermaine Jenas' reaction to Eamon Dunphy punditry is absolutely hilarious
Conor McGregor's next fight narrowed down to two options
"At the end of it, you're just saying, 'thank God I didn't block that ball down'"
Andy Farrell names Ireland squad for crucial England game
The Tony Kelly show in the storm as forgotten man Shanagher shows his worth
Converted corner back sums up the magic of Davy Fitz
You may also like
7 months ago
“We weren’t taking Mayo for granted the first day" - ladies saving difficult year for Galway teams
9 months ago
"We’ve things to work on, some of our decision making and skills let us down again"
2 months ago
Tampons and pads: Is Ireland "On The Baw"?
2 months ago
Increased contact among proposed rule changes for Camogie
2 months ago
Waterford duo star as Munster retain inter provincial crown
2 months ago
“I was in shock and looked at the clock. Did that just happen?”
Next Page