Orla O'Dwyer has become the first Irish woman to be named on the AFLW All-Australian team of the year.

The Tipperary star was a powerful presence in the Brisbane Lions team for a second year in a row and, on the back of her performances, was among the 21 players who were given the distinguished honour.

O'Dwyer was named in midfield on the team and, with her season coming to a disappointing end last weekend, when the Lions lost to North Melbourne in the preliminary final, this comes as a consolation, albeit a deserving one. That's because, as a key midfielder for her team, the Cashel woman kicked six goals and made a huge overall impact on the League.

O'Dwyer is the first Irish female to make the team but back in 1993, the great Jim Stynes earned the equivalent honour in the men's game for his displays with the Melbourne Demons.

Congratulations to all the players named in the 2022 AFLW All-Australian team led by Emma Kearney and Hayley Miller 👏#AFLWAwards | #AFLW pic.twitter.com/i9ElV47mWo

It was a great night for O'Dwyer but Cora Staunton, on the other hand, can feel aggrieved that she was named on the team. The 40-year-old Mayo woman kicked an incredible 18 goals for her Greater Western Sydney Giants side but, in a frustrating development that saw midfielders shoehorned into the team as forwards, Staunton missed out. 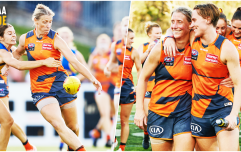 END_OF_DOCUMENT_TOKEN_TO_BE_REPLACED

Former Dublin footballer and International Rules player Niamh McEvoy was among those who criticised the decsision, the St Sylvester's club-woman asking the if the Aussies only wanted one Irish player on the team. Because, having scored 18 goals in just ten games for one of the League's worst clubs, you'd have imagined that Staunton had done enough.

Shocked Cora was snubbed,, that headbanger scores when she wants! She hands down should have nabbed that centre half forward spot. Was it a case of only one Irish person getting the nod or have GWS upset someone they shouldn’t have 😅?? https://t.co/PVyPH07LzR

The only trend of All-Australian teams that really irks me is pushing midfielders into the forward line. Especially when it means someone like Cora Staunton - who kicked 18 goals for a bottom six club - gets shoved out of the team. https://t.co/Uueu4Vm3f1

Cora Staunton completely robbed by a broken system of squashing midfielders into the AA team by naming them out of position. https://t.co/Ch8Nfkv7S9


popular
Liverpool set £60m Mo Salah price as contract talks continue
Glass half full as Derry's positive play produces five fantastic goals to reach All-Ireland semis
QUIZ: How many of the 10 most successful football counties can you name without making a mistake?
Patrick Vieira claims he was 'much better' than Roy Keane in new interview
Matt Le Tissier says he asked Sky Sports why they never sacked Jamie Carragher
Éamonn Fitzmaurice explains Aidan O'Shea's best position and how it can be used against Kerry
"All of a sudden he had me midfield with Niall Scully. We played Na Fianna and I was chasing after Eoin Murchan."
You may also like
1 week ago
Jordan Flynn completes classic Mayo comeback with 35 yard lob with the last kick
3 weeks ago
Mayo v Monaghan: All-Ireland qualifier to be shown exclusively live on NOW
2 months ago
Sligo's inspirational captain dedicates Connacht title to Red Óg Murphy and his family
2 months ago
Full back has to keep the ball sitting as west of Ireland winds blow into Mayo-Galway
2 months ago
"The Aussies were brutal, they'd call you all sorts of names" - Hanley on sledging in the GAA
2 months ago
After all the mouthing, O'Hora admits defeat and pays his respects to outrageous Clifford
Next Page