The star-studded Leinster champions got the better of London outfit Holloway Gaels earlier this month and Aherne believes that helped give them the edge in the final four. Scenes in Navan as Hannah Tyrrell beats Meath on the buzzer

END_OF_DOCUMENT_TOKEN_TO_BE_REPLACED

A 4-11 to 2-5 victory for Syl’s against the Fermanagh champions has set up an All-Ireland final meeting with Castlebar Mitchels of Mayo on the weekend of February 5/6.

On Saturday, Mitchels got the better of Castleisland Desmonds from Kerry in a thrilling match in Castlebar, while it was a more straight forward victory for St Sylvester’s.

Anthony Cooke’s side were backboned by Dublin All-Ireland winners and it was Aherne who really came to the fore, as she shot 2-5 over the hour at Gaffney Park. 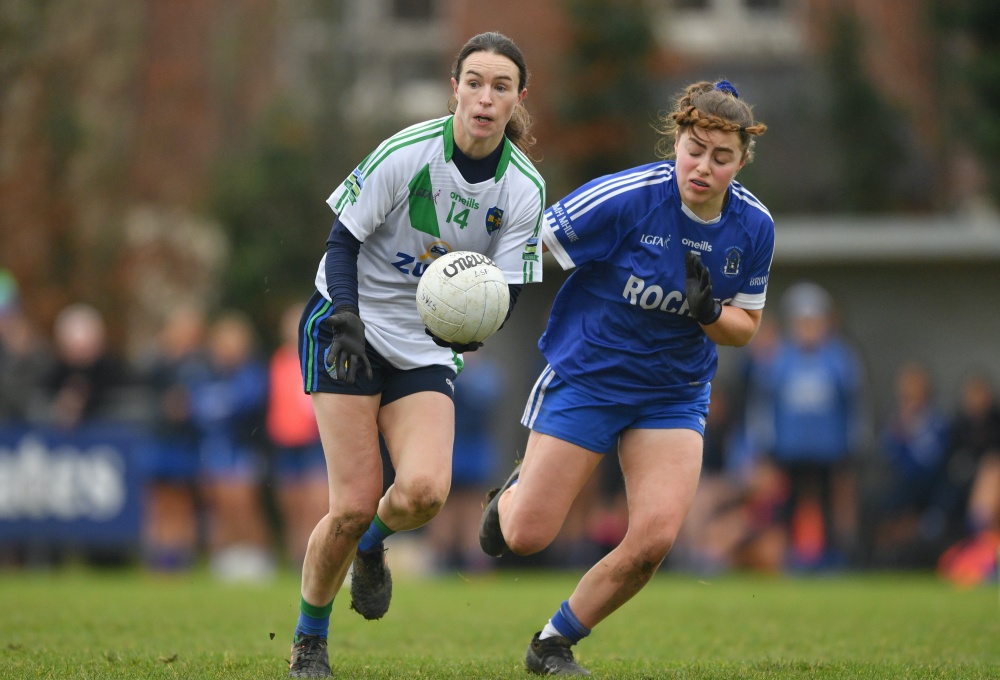 END_OF_DOCUMENT_TOKEN_TO_BE_REPLACED

She opened the Sylvester’s account inside the first minute with a goal and they raced into a big 3-7 to 1-3 half-time lead. Emma Sullivan scored another goal while Aherne doubled her tally.

And although Aine McManus scored a goal, Kinawley already had a mountain to climb. Katie O’Sullivan and Joanne Doonan traded goals in the second half but Sylvesters cruised into the final.

“We probably had the benefit of a game, having played a quarter-final a couple of weeks ago. Training after Christmas was a bit disjointed with all the Covid stoppages and everything,” said Aherne.

“To get that game under our belt, we were just buzzing for the match today. We’re happy with the win but very much looking forward to the final and hopefully we give it a good go.”

END_OF_DOCUMENT_TOKEN_TO_BE_REPLACED

Mayo and Connacht champions Castlebar Mitchels were the first team to book their place in the intermediate decider after a hard-fought 3-7 to 2-7 victory.

Laura Brody, Niamh Hughes and Danielle Caldwell scored three goals directly after the last water break to leave the hosts ten points ahead. But Castleisland Desmonds rallied and a couple of late goals from Amy Curtin and Julia Ann Twomey almost resulted in an unlikely comeback.

“Everybody’s legs were about to go in the last few minutes but nobody gave up and all the training we’ve done in the last year, we were fit and strong and that showed in the end,” said Mitchels captain Lisa McManamon.

Meanwhile, the 2021 currentaccount.ie All-Ireland Junior Club Championship Final will be contested by St Judes and Mullinahone over the weekend of February 5/6.

St Judes beat Carrickmacross and Mullinahone got the better of St Brendan’s in Sunday’s semi-finals.

Aisling Gannon and Niamh Kerr fired the crucial goals late on in St Judes’ 3-9 to 0-11 success while it was Lorraine O’Shea and Denise Gaule who made the difference a 1-6 to 0-6 victory for the Tipperary champions. Kilkenny camogie star Gaule plays football for the club, located not far from the Tipp/Kilkenny border and having scored a goal in the quarter final, she struck two fine points on Sunday.


popular
Roy Keane shows great comic timing after Jack Grealish party invite
France the sore losers as Ireland Men reach first ever Sevens World Series final
"I don't want to stick the knife in" - Are Leinster in Munster's heads?
Footage captures the moment Mo Salah discovered Manchester City were winning
Noel Gallagher left 'covered in blood' after headbutt from Ruben Dias’ dad
Ralf Rangnick nicknamed 'specs' and subject to 'bully behaviour' at Man Utd
Brian Cody doesn't entertain Anthony Nash question about Henry managing Galway
You may also like
1 week ago
Just because they signed an autograph doesn't mean they're not hurting inside
1 week ago
Kilkenny, Dublin and Wexford could all still end up going out of the championship next Saturday
1 week ago
Familiar feeling for the Dubs as Kilkenny rack up a cricket score
1 week ago
"I realise on the far side that all of that stuff is not what it's cracked up to be." - 2011 reunion allows O'Sullivan to take it all in
1 week ago
"Jesus, no, if he finds out, he'll think I'm going soft now." - the social life of inter-county GAA players
2 weeks ago
Buff Egan calls it as Laois skin the Cats in O'Moore Park
Next Page