Conditions a legitimate excuse, but one player rose above it all with exhibition from above

Liam Shinnick had a nickname for Aishling Moloney by the time she was 11.

The Cahir chairman of 28 years, a coach for the majority of that quarter millennium. He'd seen plenty of brilliant young players pass through the most rising football club in Tipperary.

But Moloney, from the day he first seen her with ball in hand, was on a different level. The 'wizard' felt about right. It lives onto this day.

The flame haired youngster, tall and exceptionally athletic for her age, won everything there was to win as a juvenile in Cahir. She wasn't alone - far from it - Corcoran and Howard were wizards too, Shinnick is keen to stress. But Moloney had something you can't coach. Still does a decade on.

This time, she showed it off on a national stage. This time, the whole of Ireland got to appreciate the most graceful ladies footballer of our generation in one of those outrageous and exclusive-to-her moods. It's only fitting that her consistent brilliance is even further underlined by the circumstances out there today.

The brilliance, first of all. It has seen her hit scores like this.

Video: What a goal! See Aishling Moloney somehow first the ball to the Cork net in tonight's Lidl NFL game, from the @MacAV_NI Live Stream with @BridStackie on co-commentary.. @LadiesFootball pic.twitter.com/MT8l8r4y7p

The All-Ireland ladies football finals played off to atrocious weather conditions on Sunday afternoon in Croke Park and unsurprisingly, fumbles, spills and misplaced passes were the theme of the day.

A slippy pitch, a wet ball. A footballer's nightmare. It only means one thing.

The nuts and bolts rather than the icing. The tackles, the interceptions, the elbow grease. Five scores was all it took to win the senior game.

Call it ironic or whatever you want then, but there was an intermediate skipping about the Drumcondra turf today who proved a glorious exception to the rule of thumb. 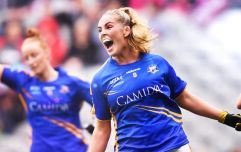 END_OF_DOCUMENT_TOKEN_TO_BE_REPLACED

Moloney turned in one of the great All-Ireland final displays to win the intermediate title for Tipperary.

She rose above all those legitimate excuses to do what she's been doing every day since she was a youngster in Cahir. Making the extraordinary ordinary.

Who's that number 11 for Tipp?

We should never have doubted that she wouldn't deliver. That something like the conditions could put her off. She seems to reach this zone every time she crosses the white line.

She did it for Tipp, inspired them to their second All-Ireland intermediate title in three years. This time, managing 0-8, 0-7 of them from open play in an exhibition that took every onlooker from annoyance at the weather to sheer awe at the magic of it all.

Some of her scores were different level jaw-dropping. Like this one when she had no right to gather that ball.

There is NO WAY she should have been able to pick up that ball and keep balance to score....

The best ladies footballer in the country put on a show in Croker todaypic.twitter.com/6x4hit7Roe

She played crucial roles in Tipp's two goals, dictated the game to her hearts' content.

Tipperary will be senior next year. Aishling Moloney will be where she belongs.


popular
The SportsJOE 12 o'clock quiz | Day 117
Diarmuid Connolly's Boston heroics captured in stunning, evocative video
QUIZ: See if you can identify these retro football kit sponsors
SportsJOE 2000s Football Quiz | Round 10
The SportsJOE 12 o'clock quiz | Day 116
Clubs set for ticket mayhem with no more than 50 supporters per club
"There was a Watt-bike, weights and a piece of grass waiting for him"
You may also like
1 month ago
Shane Long: The one that got away from Tipperary hurling
1 month ago
"I knew I didn't have the pace or strength, it was just get it and try kick it left or right"
1 month ago
"You had no other choice but to get down and dirty with these boys"
2 months ago
"It never crosses my mind that I lifted it on the pitch rather than on the stand"
2 months ago
GAA Hour | Tipperary v Galway 2001 All-Ireland hurling final
3 months ago
We give you the All-Ireland hurling final, you tell us the man-of-the-match
Next Page