After beating the door down, admirable Clare club chasing even more success

It has been a whirlwind three weeks for the Parish of Kilmihil in West Clare and if this weekend goes to plan, there will be plenty of excitement to shorten the autumn evenings.

Twenty-five years on from their formation, Kilmihil Ladies footballers finally won their first Clare senior title at the end of September, and last weekend they defeated Tipperary champions Aherlow to reach the Munster Senior B final. This afternoon, they face Waterford winners Ballymacarbry, who recently won their 38th county title in a row, and tomorrow the men’s team play in the Clare Senior B final. What a weekend it could be.

A win against the country’s most successful ladies team will set up a Munster A final against All-Ireland champions Mourneabbey, and for team captain Ellie O’Gorman the challenge is to take it all in as it’s happening.

The first hurdle is often the toughest to clear, and becoming Clare champions was a massive moment for this team. Three years in a row they had lost to Banner Ladies in the county final and with 15 wins in the last 16 years, the Banner girls were favourites again this year. But at the fourth time of asking, it was Kilmihil’s day.

“The Clare county final win, we never looked beyond that to be honest,” said O’Gorman (25), a Clare inter-county regular for the last six years.

“It’s nine years since we first turned senior and we’ve played the last four finals against Banner Ladies. It was a big relief when that final whistle blew to get over the line and prove to ourselves that we were able to do it." 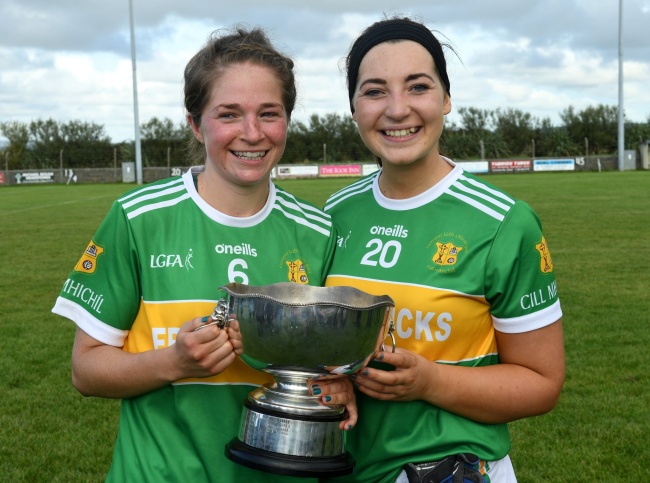 “The last three years we have been there to thereabouts, second best and everybody saying ‘oh well done for getting there’ but never really getting over the line. We knew we could give that extra little bit and we did this year.”

Their recent success wasn’t the club’s first glory day though, and the ladies team pulled off a huge achievement by winning the Junior All-Ireland title in 2009. After a few years, however, that team had broken up as emigration and retirements took its toll, so much so that there was no ladies team at all in Kilmihil in 2012 and 2013.

“We’re a small little village, we wouldn’t have a big population, but the girls who are there are committed. Going back to 2009, that group has moved on and now it’s up to us. We have stuck together the last few years and this year thankfully everyone committed from day one.

“It was a numbers thing I suppose. A lot of those girls retired, a few emigrated, a few were starting families so the numbers depleted a bit. I think six or seven of us assisted different clubs in West Clare for two years, then thanks to a few people in the club, we got it back up and running.

“We started back in intermediate and we won that the first year. We went up senior and won the senior B the following year. We have played in four county finals in a row since then and we won it in the fourth one.”

The practice of ‘assisting’ other clubs meant that the interest in the game never died in the village, and this year Kilmihil have benefited from other clubs unfortunately struggling in the county. Two ‘camogie girls’ from Newmarket, Carol O’Leary and Jenny Kelly, are still affiliated with their home club but have been granted permission to play with Kilmihil. And with Irish rugby players Eimear Considine and Edel McMahon, and AFL star Ailish Considine also heavily involved, there is a real multi-sport culture in the club.

“Carol and Jenny have been a massive addition, it’s great to have players of their quality with us. With players from rugby, AFL and camogie, you have leaders all over the field bringing different expertise from different codes. It’s not the same girls every time: everyone has their own experience to bring to the team and it has flourished as a result.”

Being one step away from the Munster A final, it might be tempting to dream big, but you’d have to expect that this is the biggest test so far for Kilmihil. Last week was their first Senior B championship game ever, and today they take on a team that has competed at this grade every year since 1982 – 12 years before O’Gorman was born! But she’s confident the team has the ability to make rapid improvements.

“When we looked at the Banner, we always wanted to get up there with them. Now that we’ve got up there, Ballymac are another level up. Winning 38 titles is some achievement. We know a few of their players from playing against them on the county scene. They have a lot of experience, they’re very well-organised and structured.

“It will take a lot to try and break them down but we have quality all over the field this year and in every line we have girls that are well able to take on the game. We have taken each game one at a time all year, even in the group games in Clare we did that.

“We had one or two little plans for the opposition but we’ve mostly looked at ourselves. The county final and against Aherlow was the same so we are not going to change on Saturday.”


popular
Man United aren't good enough to accommodate Ronaldo's refusal to work
The FootballJOE Pub Quiz: Week 10
'I was sitting here this week and people were wondering if I was going to retire'
Andy Farrell's Ireland squad for November internationals to feature some exciting talents
Ireland star Will Connors on his rude awakening playing GAA in KIldare
"I won't let that happen!" - Peter O'Mahony riled up by Connacht star
England receive Wembley Stadium ban following Euro 2020 final debacle
You may also like
1 month ago
Galway fans' frosty reception for Davy Fitz doesn't make any sense
1 month ago
The 2021 All-Ireland hurling championship quiz
2 months ago
"It wasn't a Zinedine Zidane style head-butt" - Dalo bats for Casey
3 months ago
Soul-searching begins in Clare after 40 point minor hiding
3 months ago
Absolute spice in the qualifiers as Clare draw Wexford
3 months ago
Not even a hack-saw would have cut the tension in Brian Lohan's post-match interview
Next Page