“I expect myself to be great” - Ben Kiernan, the Irishman with his sights on the NFL

When it came to me, I kicked the ball from sideline to sideline."

Daniel Whelan and James McCourt both went close to being added to NFL rosters, this season. Ben Kiernan is already taking inspiration from that duo as he seeks to go one step further, into the big time.

We asked Scott McCabe, of The Irish Punt, to catch-up with North Carolina’s Irish punter to discuss his remarkable American football journey. 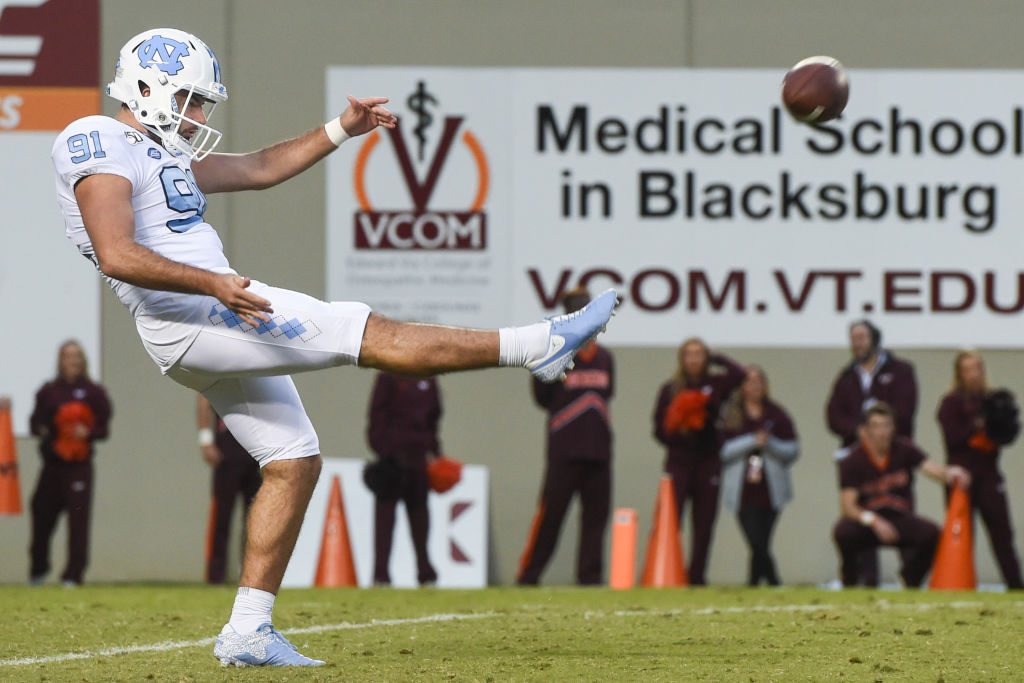 Ben Kiernan lived in Ireland with his family for 15 years before they moved from Dublin to North Carolina. Kiernan’s love for rugby led him straight to American football.

END_OF_DOCUMENT_TOKEN_TO_BE_REPLACED

Kiernan played rugby in Blackrock as a teenager and when his family moved to North Carolina, Kiernan wanted to continue playing the sport he grew up with. However, he soon realised that rugby was not all that popular in America.

Kiernan’s Mum, Cora, was approached by a Wakefield High School football coach at a local supermarket where the coach asked for Kiernan to attend American football try-outs for the squad.

“The next day I came out to try-outs. I played offense, defense and just about everywhere. Then on the last day of try-outs, they wanted everyone to kick the ball as far as they could,” Kiernan said.

“The other guys were dropping the ball and missing it. When it came to me, I kicked the ball from sideline to sideline and then the coach said: ‘Yeah, you’re our guy’." 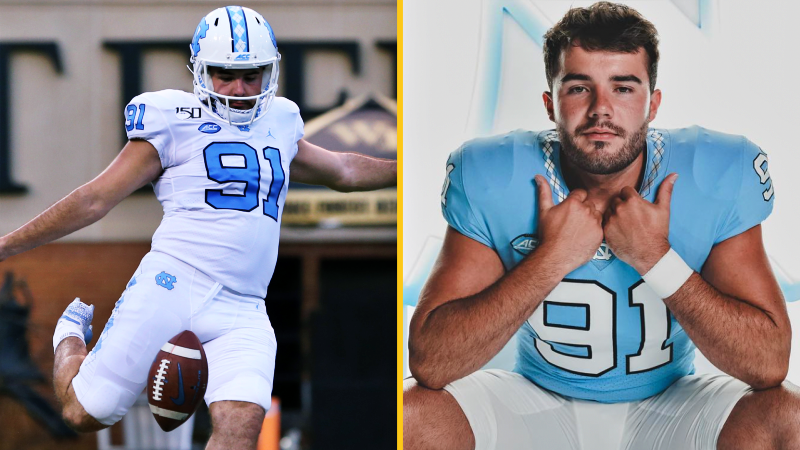 From Wakefield to UNC

END_OF_DOCUMENT_TOKEN_TO_BE_REPLACED

Kiernan’s impressive display of his punting ability at Wakefield resulted in the Dubliner being ranked as the No.14 punter in the nation by 247Sports.com.

Kiernan took command of all the kicking duties for Wakefield’s special teams and impressed in his senior year where he averaged 45.8 yards per punt. By the time it came to college recruitment, the University of North Carolina (UNC) came calling.

“I remember I was sitting in math class, and I got a text from my Dad that said: ‘College is paid for.’ My Dad said, ‘I just got off the phone with Mack Brown, they’re offering you a full scholarship to UNC.’ It felt like a fever dream. It was an unbelievable moment,” Kiernan said.

Things could’ve been very different had Brown not reached out to Kiernan’s father, Mike. The previous day, before Kiernan was offered his scholarship to play at UNC, he sat down with his parents and decided that he would play rugby instead of American football as he had plenty of rugby offers to choose from. However, when UNC comes calling, you answer. The possibility of playing for UNC and potentially in the NFL was too good to refuse.

When it comes to staying calm and collected on the sidelines, there’s a pre-game speech from Paul O’Connell that Kiernan regularly watches for wisdom. Since he was a kid, Kiernan has always strived to be the best at any sport who took part in.

“Whenever I was playing in my back garden, I would think that I was Ronan O'Gara or Brian O’Driscoll. I did that most days instead of doing my homework,” Kiernan said.

“When I would go to sporting camps, I’d figure out who the best guy was, and I wanted to go head-to-head with them. I wanted all the smoke."

“In my junior year of high school, I met this guy, Chris Sailer [a punting and kicking expert]. I went to the Sailer camp in North Carolina, it was the first time he ever saw me,” Ben Kiernan said.

“I averaged about 52-yards a punt. One by one I was going against Sailer’s top guys, and I was working them,” Kiernan added.

Besides the video game ‘Madden’ and a San Francisco 49ers jersey that Kiernan picked up when he visited America with his family before they moved to North Carolina, Kiernan had minimal knowledge of American Football. Fast-forward a couple years and now Kiernan enters his senior year with the Tar Heels and he’s got the National Collegiate Athletic Association (ACCN) on notice after his stellar start to the 2022 season.

Just this week, Kiernan was named the Ray Guy Punter of the Week after his five punts against the Georgia State Panthers where he averaged 54.2 yards per punt. The accolades don’t stop there. Kiernan was also named to the Ray Guy Award watch list; an award presented to the top punter at the FBS level.

After an NFL offseason that saw Irish punter Daniel Whelan and Irish kicker James McCourt unable to clinch a spot on the final 53-man roster of an NFL team. The 37 year wait for an Irishman in the NFL continues, but Kiernan aims to shatter that drought.

“If an NFL team were to select me in the 2023 NFL Draft, they’re getting a competitor. Someone who takes everything very aggressively. I’m going to push the limit- working out, running, punting. I expect myself to be great,” Kiernan said.

“Consistency is something that I strive for. Being the most consistent player in the room. And never letting anybody down. If I tell somebody I'm going to do something, I'm going to make sure that I get it done."

Kiernan is not the only Irishman putting on a show in college football. Georgia Tech punter David Shanahan, who is originally from Kerry, has been punting for Georgia Tech since 2021. Although Ireland was unable to produce an NFL starter this season, it’s only a matter of time before an Irishman makes the final 53-man roster of an NFL team.

There’s also no fear of Kiernan forgetting about his Irish roots.

"I always make sure I've got the tri-colour on the back of my helmet."

If you think you’re ready to test your American football skills as a punter/kicker. Check out Leader Kicking; an organisation that was set up by former rugby union player, Tadhg Leader. Leader has extensive knowledge of kicking under his belt after kicking in The Spring League [TSL] and the Canadian Football League [CFL]. For more information visit: Leader Kicking


popular
Ireland vs Wales: All the big talking points, moments and player ratings
The SportsJOE Friday Pub Quiz: Week 9
Ireland team to play Wales: Andy Farrell's XV, the big calls and bold cuts
Five confirmed changes and guidelines to have big impact on 2023 Six Nations
Juventus are reportedly ready to terminate Paul Pogba's contract
"Every team did it!" - Paul O'Connell on Roy Keane comment to Ronan O'Gara that he couldn't deny
Everton release brutal 59-word statement to confirm Anthony Gordon departure
You may also like
2 months ago
Patrick Mahomes shows young pretender how it's done in thrilling Chiefs comeback
2 months ago
Josh Allen and Buffalo Bills left stunned by 'greatest catch in NFL history'
2 months ago
NFL round-up: Patrick Mahomes the hero and Kirk Cousins living his best life
3 months ago
Tom Brady’s year goes from bad to worse as 49ers get themselves a true baller
3 months ago
Bill Belichick makes big quarterback call as Justin Fields win it for Chicago Bears
3 months ago
Taysom Hill puts together one of the most absurd performances in NFL history
Next Page