It is hard to get your head around the fact that Danielle Morrissey is still only 18.

Okay, she turns 19 next month, but the first year health science student at WIT is already in her third season on the Kilkenny squad that bids for a fourth consecutive Littlewoods Ireland Camogie Leagues Division 1 title against Galway at noon in Croke Park tomorrow.

It was impossible to ignore the Conahy Shamrocks prodigy as she soared through the ranks and it said much that when Ann Downey and her brains trust needed some extra numbers for competitive in-house games prior to the All-Ireland Final in 2016, she got the nod.

Morrissey clearly created a major impact and within a few months the precocious scoring machine had broken up the All-Ireland-winning forward division. Such was the trust in her temperament that she was entrusted with free-taking responsibilities too and the fifth year pupil was on the scoresheet as Kilkenny defeated Cork in the League Final at the Gaelic Grounds.

A few months later, she started the All-Ireland Final but the Rebels took the honours. Even then, she was fully aware of what it meant to wear the black and amber on such a stage and alongside so many players she had looked up to. 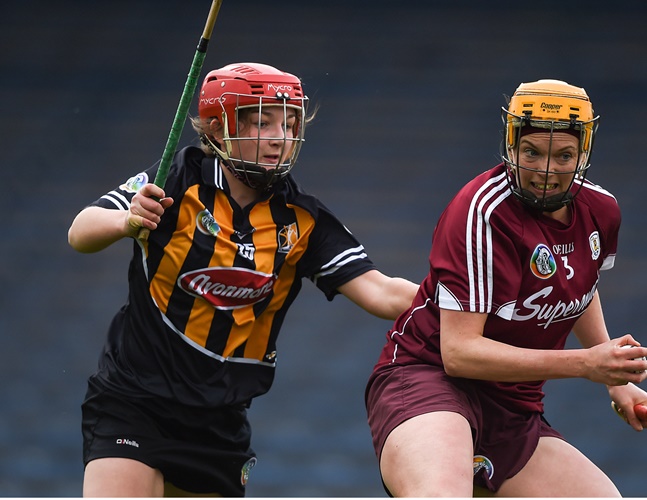 “In 2016 I was sitting in the stand watching the girls win the All-Ireland” she recalled this week.

“Then in 2017, to be up there with them and feeling the defeat with them, it was surreal. It is something you dream of. Obviously, you want to win but the failure will make you stronger in the end.

“There are no cliques. Everyone gets on with everyone. Everyone is friends there. There wouldn’t be groups here and there. You go in to train and you train hard, and you go home happy.

“I am finding my feet this year a bit more.”

The latter line is telling. Though she would end 2017 scoring 3-11 of 4-18 as Conahy annexed the County Junior title, Morrissey suffered a little from the dreaded second-season syndrome last year, when she had the significant matter of the Leaving Cert to contend with too. Now, though the competition for places is fiercer than ever, she just feels more comfortable in terms of her own place within such a group, voicing an opinion and helping some of the newbies make the transition.

“You feel like you have more of a place. It’s the third year in there now. I need to start standing up. Bringing on the new girls who are coming in every year.

“I think it takes a bit of time to get up to the standard of what the girls are used to training at. You are coming in and you don’t want to let anyone down with your touch. You want to be as quick and as fast as anyone.

“Last year was a tough year as well because it was my first year losing a Final in 2016, and I didn’t know what to expect then going into the year ahead. Everyone is training hard and places are hard to get on the team. It depends on the day, who is best suited for what tactics you need.”

Losing a second All-Ireland Final in 12 months by a point last September was a bitter pill to swallow.

“It took longer than the year before to get over. It is two years in-a-row losing by a point. This and that and the other could have went right. It’s parked now and it’s a new year. All we can do is go forward. We can’t go back and change things. This year, hopefully we can do one better.”

They have certainly impressed thus far in the group stages and in defeating Cork in the Semi-Final. While still attempting to be defensively robust, the deployment of Anne Dalton higher up the pitch is just one noticeable change. Morrissey’s own positioning can vary and not always of the sideline’s volition.

“I do be slipping in and out of corner-forward to the wing. We have a bit freedom in there this year. Go out and hurl and don’t be afraid to make mistakes.”

Presumably, talk of four-in-a-row has been banned?

“I haven’t even been thinking about that. It is just another day out in our eyes. Hopefully we can get the win. If we do it will be the cherry on top of the cake with the four-in-a-row. But we wouldn’t be looking into that too much.

“Any day you go up to Croke Park you want to come out with a win. I don’t think it will affect us too much, where the match is going to be played. We are playing Galway, they are a strong outfit. We hope to match them on the day and get the win.

“But they drew with Cork in the league. We won’t underestimate them anyway.”

“It’s going to be tough but you have to look forward to these kind of games; they don’t come around too often. Embrace it.”


popular
Paul O'Donovan busts the cliches and leaves the mystery behind him in one more emphatic interview
Ireland's rowing heroes on what everyone was shouting as they beat Team GB to bronze
Next time someone doesn't cut you slack for commuting to training, show them Joe Canning's words
Aidan O'Shea on gym work, training over lockdown and the importance of younger players bulking up
Warren Gatland with great response after being asked if he'll set up Twitter account
"Ah I suppose it's fine" - Paul O'Donovan and Fintan McCarthy are Olympic gold medallists
People are shocked after finding out how much an Olympic gold medal is actually worth
You may also like
1 month ago
Aoife Doyle scores a goal so good that you'll have to watch it twice
1 month ago
"You’d be blessed to play anywhere on the field" - Teehan taking her chance
1 month ago
After watching a game of hurling, Padraig Walsh finds it hard to sit down and watch anything else
1 month ago
McGrath and O'Connell the stand-outs as Camogie League gets down to it
7 months ago
Doyle's remarkable comeback story epitomises spirited Kilkenny triumph
8 months ago
Gaule and Dalton inspire Kilkenny to a famous win
Next Page