"Critics may say you see the bad side of it, but that, for us, is just his emotion."

There is a great picture, taken by Ramsey Cardy of Sportsfile, of Will Connors giving a post-match interview after winning Man of the Match on his Ireland debut.

The Leinster flanker is giving his thoughts on a Six Nations victory over Italy, and all under the watchful eye of his captain - at provincial and Test level - Johnny Sexton. The outhalf is waiting to present Connors with the MOTM accoutrement and looking ever bit the proud mother hen. 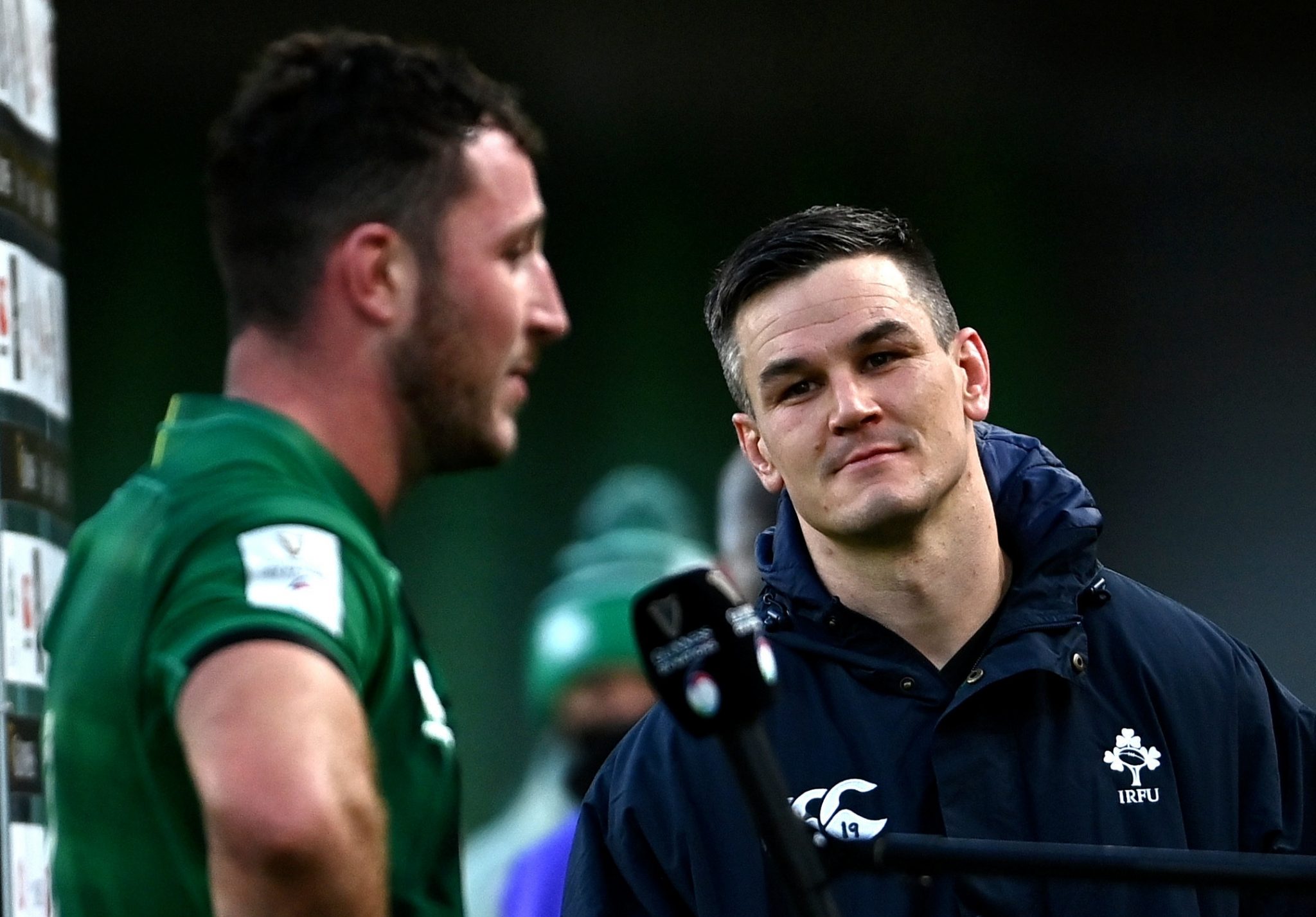 END_OF_DOCUMENT_TOKEN_TO_BE_REPLACED

To Sexton, Connors is part of the next generation that will sustain Leinster's success and keep Ireland near the top of the world game and pushing for trophies. Given that Sexton is 36 and currently on a one-season contract, Connors and his peers could be the players that Sexton eventually passes the baton over to before hanging it up.

There is not a hope, then, that Sexton will go out - whenever that day comes - without imparting every piece of knowledge and making sure the new lads pass muster.

On the latest House of Rugby URC episode [LISTEN from 13:00 below], Connors told hosts Greg O'Shea, Megan Williams and Jason Hennessy just what it is like to train and play under the fiery leadership of Captain Sexton. 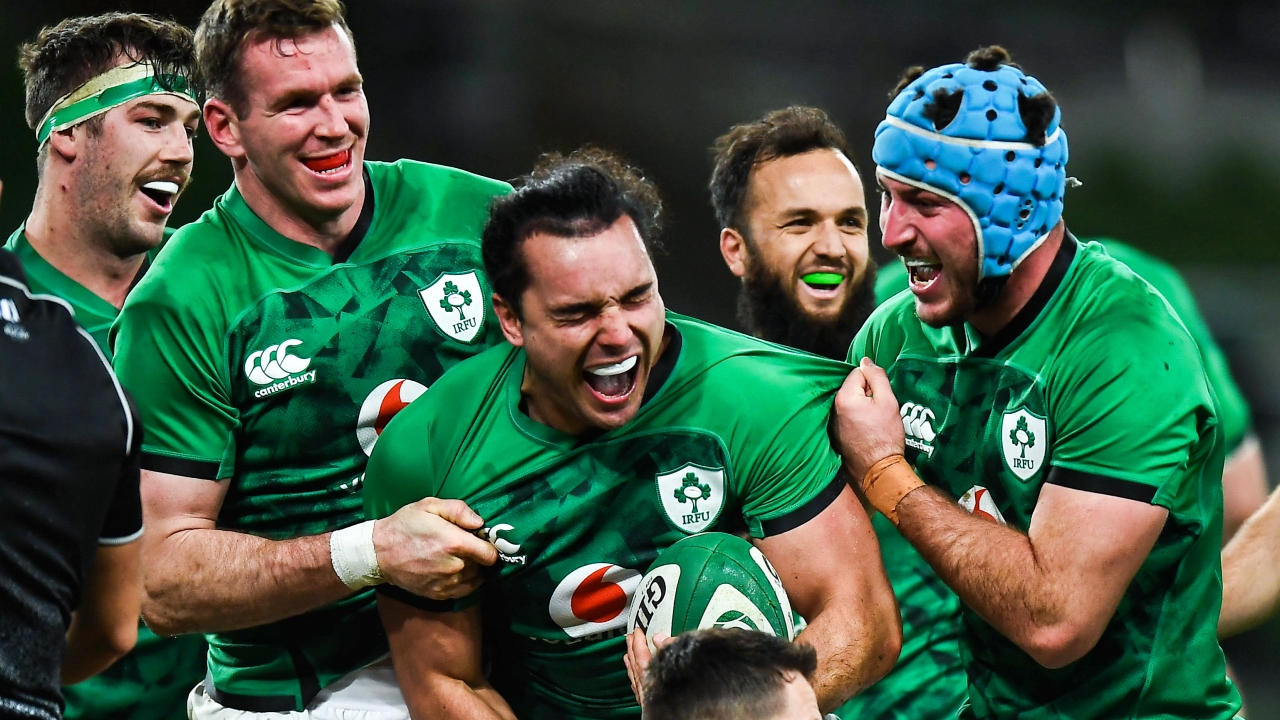 Will Connors (R) and James Lowe celebrate the winger's try against Wales in February 2020. (Photo by David Fitzgerald/Sportsfile)
Advertisement

"Even as the captain of the club," says Will Connors, "Johnny really gets the best out of us. He’s a great leader and you can even see that in the game (when) he comes on. Even if you look back at the pre-season game against Harlequins, you see how much it means to him to be playing in these games.

END_OF_DOCUMENT_TOKEN_TO_BE_REPLACED

"He said it before, but to be in these changing rooms with a bunch lads like that - either playing for Leinster or Ireland - it’s a privilege. You don’t know, it could be your last time putting on that jersey. You can really see him live his own words, and doing that.

"Every game he plays, his passion. Critics may say you see the bad side of it, but that, for us, is just his emotion. He really plays with his heart on his sleeve, and that’s the best thing about him."

Greg O'Shea sought to get an insight from Connors on what Sexton is like to train with. He is known to suffer no fools and be a bit curmudgeonly.

Sean O'Brien, who played with Sexton for a decade, referred to the Ireland outhalf and Welsh counterpart Dan Biggar as 'grumpy f**ks' when they were in training on the 2017 Lions Tour.

CONNORS: I suppose, as a 7, you end up being in that 10 channel a bit, so I’ve had good and bad run-ins with him! But, no, I think it’s just honest feedback the whole time.

Those that have been around the Leinster scene for years will tell you that Sexton has always been like this. Even when he was first training with the senior squad, more than 15 years ago, he was ordering players around and making himself known.

"If I have something to say to someone," the Leinster veteran commented earlier this year, "I just say it to their face."

He has always wanted the best for his sides - province, country and Lions. If feathers are ruffled along the way, Sexton feels it has been done in order to make the team better.

That is what was passed on to him, and that is what he is determined to pass on to others.


popular
Jurgen Klopp reacted like everyone else to Darwin Nunez headbutt red card
Jamie Carragher on the two Man United players Erik ten Hag can't trust
"I went up to the Italians and gave them a big auld shoulder" - Paul O'Donovan does it again
Carragher and Neville brutally name Man United's biggest transfer flops since 2013
Man United have 'decided to sell' promising midfielder James Garner
Wexford Under-20 lights it up as Ferns win their first ever county title
Wexford, Waterford and Kilkenny down some good men as Australia calls
You may also like
2 weeks ago
“My confidence was on the deck" - Aaron Connolly explains why he has made the move to Italy
2 weeks ago
Every Irish transfer in football, this summer, as several big deals get done
3 weeks ago
Six Irish players make damn impressive 'World XV' that would take some beating
3 weeks ago
The frontrunners for Ireland's 33-man squad for the 2023 World Cup
3 weeks ago
All Blacks media manager explains why Ian Foster appearance was cancelled after Ireland defeat
3 weeks ago
Warren Gatland selects nine Irish players in his strongest Lions XV, right now
Next Page