WATCH: Scotland come out from under their safety blankets to blitz United States in second half

The home of Newcastle United will stage a rare top of the table clash on Saturday.

Pool B leaders Scotland will go into their pivotal meeting with South Africa on the back of a superb second half performance against the United States.

Vern Cotter's men really needed it after a dire opening period, which saw them trail 13-6 at the break. You suspect the heat blankets were utilised in the Elland Park dressing rooms to protect the Scottish players from the roasting their Kiwi coach must have doled out. 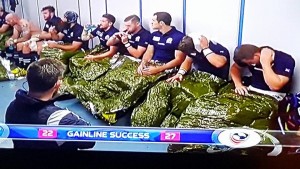 To avoid having the rug pulled from under them, the Scots needed to cancel out Titi Lamositele's 20th minute try.

END_OF_DOCUMENT_TOKEN_TO_BE_REPLACED

They went about doing so ruthlessly. Tim Visser, Sean Maitland, Willem Nel, Matt Scott and Duncan Weir all running in tries as Scotland won 39-16 - thus denying the Americans the biggest scalp in their World Cup history.

Two wins over Japan and a victory over Russia remain the extent of their achievements but the first half performance of the team marshalled by former Blackrock student AJ MacGinty suggest there is a big result in this team.


popular
"There's times I do think I probably have let people down but in fairness, I have got good support from back home"
Goal disallowed in Dublin SFC because player wasn't wearing his gumshield
The SportsJOE 12 o'clock quiz | Day 138
The SportsJOE 12 o'clock quiz | Day 137
All hail Alexis Sanchez, the man who played Manchester United like a piano
"I was asked to be the team doctor. I thought well I'll never play senior camogie for Galway"
"That's a risk I'd be willing to take" - Byrne ready and raring for a championship
You may also like
8 months ago
Devin Toner on thoughtful Ronan O'Gara message after World Cup heartache
8 months ago
"It was a complete and utter shock when Joe's name came up on my phone" - Devin Toner
8 months ago
Sinckler a stand-out, but more consistency needed - Flannery
9 months ago
"We haven't got a long-term or short-term estimate of when Joey is back" - Stephen Larkham
9 months ago
House of Rugby team agree on seven players in World Cup 'Best XV'
9 months ago
Pieter Steph Du Toit locks down World Player of the Year award
Next Page