"I know I have not always got it right."

Warren Gatland has now been British & Irish Lions head coach on three occasions, and assistant on the 2009 tour, and is the frontrunner to lead the Lions again in 2025 [feels ages away, right?].

Being tasked as the head coach to pick a squad of players that he must select from England, Ireland, Scotland and Wales is one that comes with the obvious pitfall of not being able to please everyone.

END_OF_DOCUMENT_TOKEN_TO_BE_REPLACED

Last summer, though, Gatland managed to finally win over the long-suffering Scottish fans by selecting eight of their players in his initial 37-man squad for the South Africa tour. That left 29 spots for England, Ireland and Wales, the 2021 Six Nations champions.

England [11] and Wales [10] shared 21 of those picks, leaving Ireland with only eight. While many Irish supporters were pleasantly surprised by the selections of Bundee Aki and Jack Conan, it did not offset the abhorrence of top players like Johnny Sexton, James Ryan and Josh van der Flier being left at home. Garry Ringrose, too.

Ultimately, the Lions lost the Test Series 2-1 to the Springboks, so it leaves frayed threads to pull loose. Certainly, seeing how much of an impact Sexton, Ryan, van der Flier and Ringrose [before his concussion] had in this summer's Test Series win over the All Blacks highlights the quality players Gatland deemed surplus to requirements.

If it is any consolation to them, after missing out last summer, Warren Gatland has selected his strongest Lions XV, and bench, right now. It includes nine Ireland stars in the starting XV, and two more on the bench. 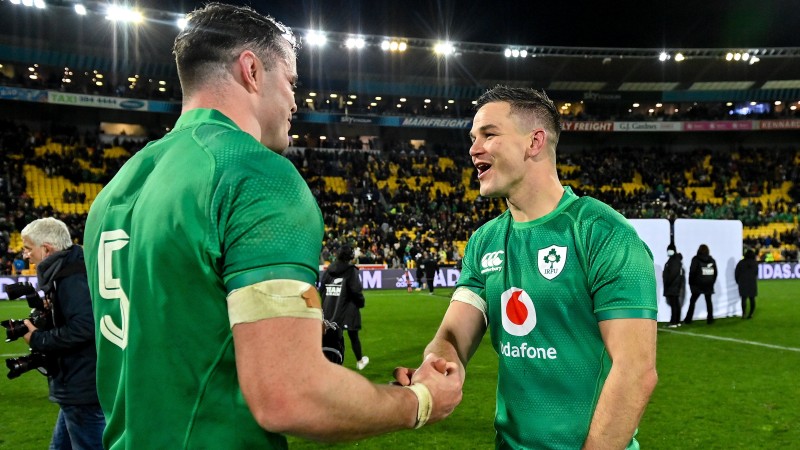 Johnny Sexton and James Ryan of Ireland embrace after their side's victory over New Zealand, in Wellington. (Photo by Brendan Moran/Sportsfile)

'At the end of the day, selection is just opinion' - Warren Gatland

Back in his native New Zealand and a regular columnist with The Telegraph, Warren Gatland has done what many of us rugby nuts do in the 12 to 18 months leading up to a Lions Tour - selected his best XV.

END_OF_DOCUMENT_TOKEN_TO_BE_REPLACED

On this occasion, Gatland has done so three years in advance of the next tour, to Australia, and hopped in some replacements for good measure.

The starting team is reflective of how the 2021/22 rugby season ended, with Ireland beating the All Blacks, with nine of Andy Farrell's men in the XV. Gatland notes that this is a hypothetical match-day Lions squad for a one-off game, as opposed to a tour.

To that end, the Kiwi has selected a couple of combinations from the same country - such as in the half-backs and second row. His most interesting comments are on James Lowe - "We didn’t take him to South Africa last year because of the number of defensive errors he was making" - and Johnny Sexton.

'Quite simply he has earned the right to be there, even at the age of 37. I think Marcus Smith is something special but if I want to win a game next week, Johnny has to start. You can’t take away from the impact he has had over the last year. In South Africa I was concerned about his injury record and whether he could get through the tour, and I still probably ask myself now whether it was the right decision to leave him at home.'

Back to his pre-2021 for, and with little reason to argue otherwise, Gatland has no Scots in his starting XV, but two on the bench. Josh Adams is the sole Welsh starter with Taulupe Faletau on the bench. England have four starters, and three more on the bench.

You can read that full article, and the reasonings of Warren Gatland here. Some form of vindication for the likes of Sexton and Ryan but one hopes the Irish lads are on a sandy beach somewhere, right now, and content enough with making history against the All Blacks.


popular
Roy Keane cracked up Ian Wright and Gary Neville with England team spirit remark
'I was so stressed the week before the All-Ireland and I ended up having a panic-attack' - O'Shea and O'Sullivan open up
World Cup 2022 Day Seven: All the major action and talking points
Roy Keane shoots down ITV presenter's 'excuse' for England's draw with USA
The nine England World Cup footballers who could have played for Ireland
Amancio Ortega interested in buying Man United from Glazers
Former England international admits he wishes he had played for Ireland

You may also like
22 hours ago
Former England international admits he wishes he had played for Ireland
5 days ago
Two baffling omissions as four Ireland stars make World Rugby 'Dream Team' of the Year
5 days ago
Josh van der Flier claims World Rugby Player of the Year at Monaco ceremony
5 days ago
"Highlight of my Ireland career" - Behind the scenes as Jack Crowley and Ross Byrne covered for a legend
6 days ago
Bundee Aki reminded us all of his best qualities, on a night Ireland couldn't do without him
6 days ago
Peter O'Mahony delivered some fitting Jack Crowley comments after surprise Test start
Next Page