The writing was on the wall.

21-11 down at half-time but Connacht never lost faith. They are made of stern stuff these days.

What helps is that the westerners are now playing a lovely brand of rugby and have a squad blessed with highly talented individuals.

Connacht ran at Toulouse from just about every blade of grass at The Sportsground. The French giants used their power game to great effect in the first half but Connacht ran them ragged after the break.

The match statistics are crazy - Connacht gained 721 metres off 162 carries. They had 66% possession and the territory split was 70/30.

The Toulouse scrum was still doing its job, early in the second half, and the club's official Twitter account sensed comeback doubts were creeping in:

As the second half wore on, Toulouse were worn down.

Pat Lam wants every one of his players to be confident, and competent, enough to take the ball on and make a difference. It was no surprise, then, to see the likes of Finlay Belaham, ULtan Dillane and Eoin McKeon all making incisions - carrying over the gainline - before the pressure told and Tiernan O'Halloran danced and stretched for a try that made it 21-16.

With an hour gone, Toulouse were pinned back in their half. Dillane went close, as did Niyi Adeolokun.

By 66 minutes, it seemed like only a matter of time. Over on the official Toulouse website, here is how they saw the Connacht barrage: 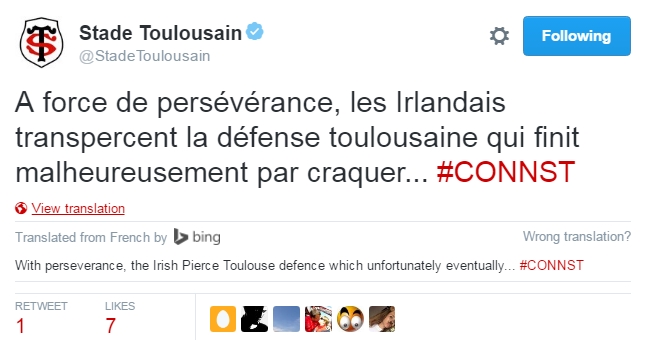 Simply put - if Connacht keep cracking away like this, the Toulouse defence surely can't hold them out until the end.

Sure enough, Bundee Aki got his hands on the ball, fended off a couple of Toulouse men and gunned for the corner. 21-21 but Craig Ronaldson still had to bisect the uprights from the right-hand touchline. No bother to him.

'WHAT REGRETS!' is how the play-by-play was headlined on the Toulouse website.

They certainly let the game slip but it was Connacht that snatched it, ran with it and took it home.

L'Equipe paid credit to an adventurous Connacht for getting the job done in the 'small, rustic stage of Galway'. Play and play on.


popular
Jacob Stockdale and Johnny Sexton not spared by English press
Baz & Andrew's House Of Rugby - Twickenham carnage
ROG hits the nail on the head assessing Ireland's performance
'Were they up for it more than us? That's my responsibility' - Andy Farrell
Triple Crown wrenched away as England scrape Ireland off their boots
Tyson Fury reveals what happened when he sparred Anthony Joshua
The Ireland XV that should definitely start against Italy
You may also like
1 month ago
Ulster join Leinster in Champions Cup quarter final after tense Bath victory
1 month ago
What Munster and Ulster need to get a Champions Cup quarter final
1 month ago
Munster's European dreams in ruins after late, controversial try
1 month ago
Max Deegan makes Six Nations statement as Leinster crush Lyon
1 month ago
Injuries to three form players cause Six Nations concern for Andy Farrell
1 month ago
France have got themselves a turnover machine for the Six Nations
Next Page