Eben Etzebeth may hold back before he goes lacing into his next tackle attempt on the Wexford native.

Deep in the bowels of a Murrayfield stadium with notoriously patchy WiFi coverage, Cian Healy was moving about to find a signal and contemplating the glory of those Tadhg Furlong side-steps.

Healy and Furlong started their first Test match together in over a year, in the 27-24 win over Scotland, and the loosehead had a fine view of proceedings when his teammate's dancing feet left Hamish Watson and Finn Russell for dead.

"He can mix up that power game when he wants to go over the top of someone or he can just get around someone," Healy reflected. "I suppose it's what makes him a bit unique, and he can mix it up with set-piece as well. It's a high level of ability he's carrying there."

Healy was quick to note how Andrew Porter 'did very well when he had his chances' and it is a valid point, but Furlong is a world-class operator and Ireland do look stronger with him in the starting XV. Having the likes of Porter and Dave Kilcoyne in reserve, though, makes Ireland an altogether tougher prospect to face.

On the latest House of Rugby Ireland episode [LISTEN from 23:30 below], Springboks star Eben Etzebeth raved about those Furlong moves and spoke about facing Furlong in a Leinster jersey and, in all likelihood, on the Lions Tour. 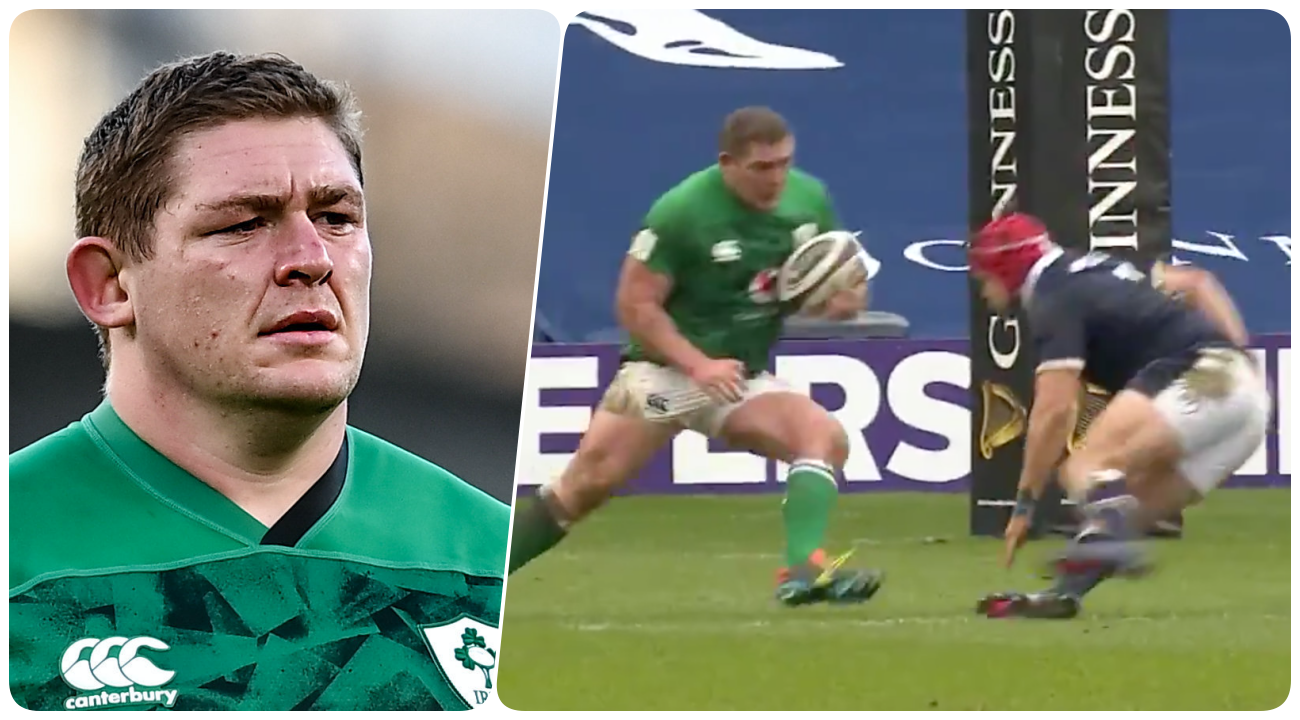 Etzebeth's Toulon team will face up against the likes of Tadhg Furlong, Cian Healy and Andrew Porter in the Champions Cup round of 16, next month. The South African lock, then, was paying close attention to Ireland's victory over the Scot.

"One thing I learned from watching the game is that I can't just run on to Tadhg Furlong and tackle him. He might step me. He was a really mean stepper, there!"

END_OF_DOCUMENT_TOKEN_TO_BE_REPLACED

Furlong was out of action for just shy of 12 months - with the pandemic and then calf and back issues - but he is looking back to his best and is set to be included in his second British & Irish Lions squad later this year.

Etzebeth was also keeping a key eye on how the second row battles in the Ireland game, and England's win over France, over the weekend.

"For the Lions, you have great lock options there in a guy like James Ryan. And you've got someone like Maro Itoje and more guys from England and Scotland to choose from."

While Etzebeth is back on club duty for Toulon, after a couple of weeks off, the Leinster players he is set to face have one big game after the next coming up. The likes of Furlong and Ryan will next face England before going into the selection mix for the Guinness PRO14 final and that round of 16 Champions Cup encounter.

"We're excited to measure up against one of the best sides in Europe," he says. "There's obviously lots of Irish players in that squad so it's going to be a great match, and one we are really looking forward to.

"We know that Leinster will be really well prepared and up for it, so it is up to us to just bring it."


popular
We knew Sean O'Brien wouldn't let us down with his Lions XV
Bill Shankly’s grandson asks for statue to be removed from Anfield
Keith Earls backed for Lions XV by one of the best in the game
'War-scene' in Tyrone dressing room before 2005 final sums up an iconic team
'Make him hurt, make him yours' - How the Springboks ruled the world
The SportsJOE 12 o'clock quiz | Day 335
Springboks legend Tendai Mtawawira tells us what he really thinks of Ellis Genge

You may also like
4 days ago
Full Ireland ratings as France deliver resounding Dublin victory
4 days ago
"Dorothy Wall, hands down... she's a wrecking ball!"
1 week ago
The six Lions spots being contested by Ireland and Scotland players
1 week ago
Rating the chances of Leinster's 16 Lions hopefuls
1 week ago
Jamie Carragher on how close he came to Ireland call-up
1 week ago
Full player ratings as Ireland dismantle Wales in Six Nations opener
Next Page