He may have ended 2018 in a frustrating manner - yellow carded in Leinster's loss to Munster - but, on the whole, it has been a year to remember for Tadhg Furlong.

The Leinster and Ireland prop has won a Six Nations Grand Slam, Guinness PRO14 and a Champions Cup, as well as being on Ireland teams that won a Test Series in Australia and defeated the All Blacks in Dublin for the first time.

The Wexford native is doing the basic requirements of his tighthead role to the highest standards and is proving a force at the breakdown and in the loose. Both Leinster and Ireland often use him as first receiver in set-plays, such is his attacking awareness, turn of pace, passing range and handling.

Furlong's talents and achievements on the pitch may not have earned him a World Player of the Year nomination, crazily enough, but plenty of rugby fans out there recognise a top operator when they behold one.

As such, Furlong was selected at tighthead in 92% of BBC fans' 'Team of the Year' selections. Some 60,000 'Best XV' selections were made, meaning more than 55,000 rugby fans wanted Furlong in their front row.

Over on House of Rugby (JOE UK's rugby show), former England captain Mike Tindall said 'Tad' Furlong was his Irish Player of the Year too.

END_OF_DOCUMENT_TOKEN_TO_BE_REPLACED

Tindall believes Furlong deserves all the praise he is getting after a calendar year to remember. He also gave Leinster the nod for 'Irish Team of the Year', ahead of Ireland themselves. Further stirring the pot, we suspect.

On Baz & Andrew's House of Rugby [from 46:00 below] there was an even bigger honour for Furlong as Barry Murphy and Andrew Trimble handed out their end of year awards. 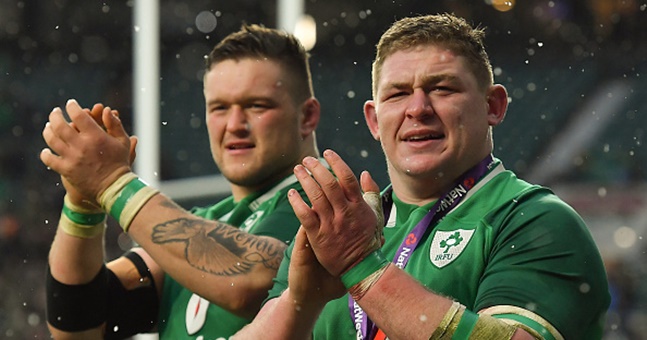 Tadhg Furlong was up against Leinster and Ireland teammate Johnny Sexton and Munster winger Keith Earls for 'Irish Player of the Year' in Murphy and Trimble's awards.

"Tadhg’s been just class," said Trimble, "and he could easily have been on the shortlist for World Player of the Year as well.

"I couldn’t agree more," said Murphy, "He was pretty much ever-present.

"I think he missed one of the Six Nations games… He didn’t play against Wales – but obviously achieved so much with Leinster and then, yeah, involved in the autumn internationals here, and he’s so talented.

"And then his skills. He scored that great try against Australia to win the Second Test. And then, just you know, showing his foot-work and his pace and his ability to play with Leinster as well. Just had some great moments."

As well as the Baz & Andrew's House of Rugby accolade, Furlong is also the SportsJOE Rugby Player of the Year.

As we look ahead to 2019, Furlong best consider scouting out an awards display cabinet in the January sales. Some man.

popular
The SportsJOE 12 o'clock quiz | Day 76
The SportsJOE 12 o'clock quiz | Day 75
SportsJOE 2000s Football Quiz | Round 4
QUIZ: How well do you know the Manchester derby?
Here's a list of 23 people who own a greater share of the UFC than Conor McGregor
Joe Rogan reveals the diet and training plan that keeps him so shredded
Michael Owen jersey number story shows Alex Ferguson at his shrewdest
You may also like
3 days ago
Tadhg Beirne raring to go again after gruelling double injury rehab
5 days ago
"Paulie was like Casper the Ghost... he had lost about two stone in the two days"
6 days ago
You'll be hard pushed to get full marks in this Serie A quiz
6 days ago
Nigel Owens on how the O'Driscoll and O'Connell captaincy dynamic worked
6 days ago
Tadhg Beirne on the Wayne Pivac request that helped change his career
1 week ago
Baz & Andrew's House of Rugby - Tadhg Beirne and John Cooney
Next Page