Leo Cullen's side put Montpellier to the sword to massively boost their Champions Cup hopes, but there are injury concerns over Tadhg Furlong and James Ryan.

Leinster needed only 24 minutes to secure the try-scoring bonus as they raced in four tries against a rabble of a Montpellier side. Having been forced by tournament organisers to accept a 28-0 defeat - after a Covid outbreak in the senior squad - this was sweet revenge.

END_OF_DOCUMENT_TOKEN_TO_BE_REPLACED

Ahead of the game, Leinster were forced to change their second row about as James Ryan was ruled out with 'a minor muscle issue'. His place was taken by Josh Murphy as Garry Ringrose took over the captaincy duties.

Leinster had not played a game since they torched Bath in their opening Champions Cup pool game. They had a 28-0 loss imposed on them due to having multiple Covid cases, despite the province naming a match-day 23 that was not affected by the virus.

Anyone wondering if Montpellier, who have had some Covid issues in the past fortnight, could catch Leinster on the hop had their answer before 10 minutes had passed. Jack Conan thundered over for his side's first try, then Jamison Gibson-Park added a second.

In between all of that, Tadhg Furlong had hobbled off after a muscle issue of his own. The tighthead pulled up after only five minutes and looked frustrated as he slowly made his way off. With the Six Nations on three weeks away, Ireland fans will be hoping Furlong's injury is not too serious. 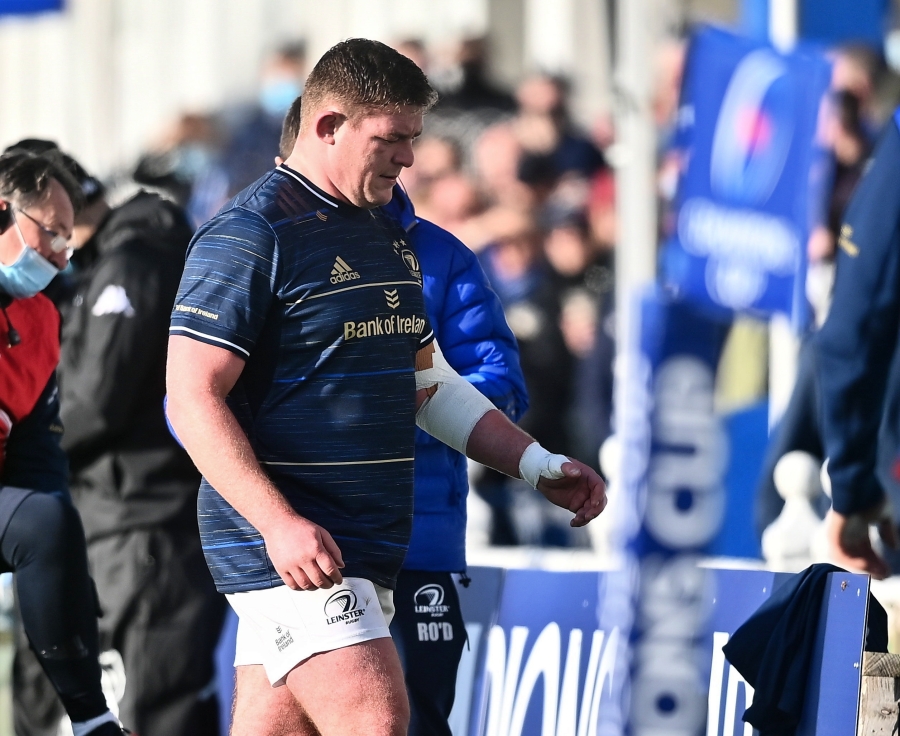 Tadhg Furlong of Leinster leaves the field as a first half substitution at RDS Arena. (Photo by David Fitzgerald/Sportsfile)

After having a Ciarán Frawley try ruled out for a forward pass, Leinster simply kept the foot to the floor. After a hashed cross-field kick attempt by Montpellier, Ross Byrne scored under the posts then converted his try.

END_OF_DOCUMENT_TOKEN_TO_BE_REPLACED

Ross Molony got the fourth to get the bonus point while Michael Ala'alatoa - the replacement for Furlong - cantered over from close range after being picked out by Gibson-Park. Montpellier grabbed a try back through Masivesi Dakuwaqa [and had another chalked off] but the half ended with Jordan Larmour scoring in the corner to make it 40-7.

That was the last involvement of Larmour [87 metres made off 11 carries] as he got treatment before making it to the changing rooms at the break. He was replaced by James Lowe at half-time, and Cullen may have another senior player carrying a knock, heading into their return match with Bath.

If Montpellier were telling themselves, at half-time, that a couple of tries could change everything, they would not have envisaged those scores coming quickly from Josh van der Flier and Jimmy O'Brien. It was 54-7 and there was still 30 minutes to play.

Van der Flier got a second, after an atrocious Montpellier lineout throw, and sub hooker Dan Sheehan helped himself to a couple of tries - either side of a Dakuwaqa red card.

Johnny Sexton was on the pitch, by this stage, and getting his first minutes in two months [since Ireland beat New Zealand]. He got 30 minutes of action and kicked five conversions as the French outfit were receiving their thumping.

With five minutes to play, Garry Ringrose almost got over for the try his play deserved but was held up just short. One phase later, Jack Conan boshed over for his second try, and Leinster's 12th. In time added on, it was unlucky number 14 for the visitors as James Lowe skipped past two defenders to add the cherry.

Our Man of the Match: Josh van der Flier (Leinster)