"There's competition all over the park after a performance like that."

The likes of Cian Healy, Dave Kilcoyne and Rob Herring will all feel they have strong shouts, but Farrell appears to be using this Test window to nail down what he hopes to be his first choice front row for the 2023 World Cup.

END_OF_DOCUMENT_TOKEN_TO_BE_REPLACED

Last Saturday, the trio started as Ireland pumped Japan 60-5. There may have been a couple of scrummaging and lineout kinks to iron out, but the performance of all three in the loose and around the breakdown encouraged Ireland supporters greatly.

On the latest House of Rugby URC episode [LISTEN from 56:30 below], Leinster and Ireland star Devin Toner joined the crew to look ahead to a massive date with the All Blacks, this weekend. 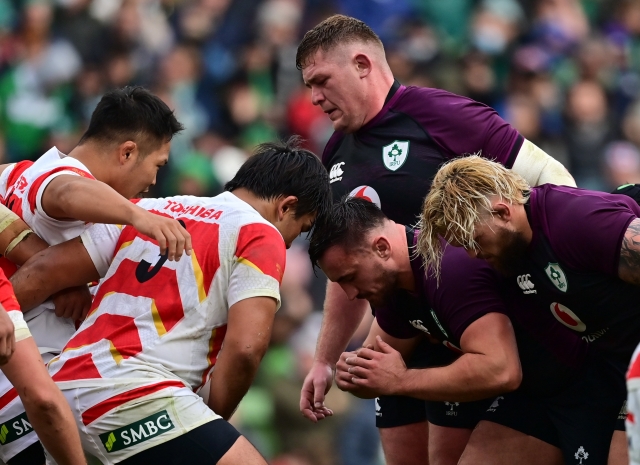 Ireland front row forwards, from right, Andrew Porter, Ronán Kelleher and Tadhg Furlong during the Autumn Nations Series match between Ireland and Japan at the Aviva Stadium in Dublin. (Photo by Brendan Moran/Sportsfile)

END_OF_DOCUMENT_TOKEN_TO_BE_REPLACED

What Andrew Porter is up to right now is noticeably old-school and downright impressive. He came into the Leinster senior squad as a highly touted loosehead, having starred there for Ireland U20s in the world championships.

Leinster had Cian Healy and Jack McGrath as their main looseheads so Porter was asked to switch over to tight. There were such high hopes for him, and his versatility, that Leinster and the IRFU were content when Wasps came calling for Marty Moore. Porter made his Leinster debut in September 2016 and made his Test debut on a 2017 summer tour.

END_OF_DOCUMENT_TOKEN_TO_BE_REPLACED

He made a name for himself as an impact tighthead and one learning his trade under Furlong. When the Wexford native had injury issues in 2020, Porter excelled in the No.3 jersey for Leinster and Ireland. Both he and Furlong made the British & Irish Lions squad, last summer, but a foot injury ruled the younger prop out.

Porter has now returned for the new season with Leinster and Ireland's No.1 jersey in his sights. Cian Healy has just turned 34, so Porter has shifted back across the front row. He is Test-level at tighthead and loosehead. It's some going.

Last Saturday, Porter rampaged about the Aviva Stadium and did all he could to nail down a starting spot against New Zealand. Healy then came off the bench and helped himself to a try.

The veteran would love a crack at the ABs from the first whistle, but Jason Hennessy feels Farrell has found his front row for the next couple of years.

"No offence to guys like Dave Kilcoyne that are going well. But you saw it there at the weekend. You have Porter, who is 25, Kelleher is only 23 and then you have Furlong, who is 28. And that, for a tighthead, isn't old. That's our front row for a while."

Devin Toner has vast experience in playing with all the front row protagonists, with Leinster and Ireland, over the past while. He has been blown away by Porter's firm grasp the propping nettle.

"He was tighthead for the last few seasons but is going to focus on loosehead a bit more, this season. It is hard to switch over. I think it's a bit harder to switch from loosehead to tighthead, from what I hear.

"Cian was trying a bit of tighthead with Leinster this season. He found it tough, but he did phenomenally well at it because he's a bit of a freak. But he's coming back to loosehead now."

It will be a risk for Farrell to start both Kelleher and Porter, at loosehead, against a battle-primed All Blacks side. The Kiwis will know how inexperienced this unit is at Test level, and will be exerting all the pressure they can.

Farrell should stay the course with Andrew Porter, Ronán Kelleher and Tadhg Furlong. If this is our presumptive World Cup front row, Saturday is the perfect time to see what they are made of.