"Obviously we haven't played to our potential. That's all the problem is, probably."

As the Welsh post-match press conference was being conducted, and with most of the journalists up with Warren Gatland and Alun Wyn Jones, an Irish quarter emerged to the 'mixed zone'.

Anticipating that Ireland may want to get out the gap as soon as possible, a handful of reporters made their way downstairs to catch a few of the players.

As Wales lock Adam Beard, beer in hand, headed in to the doping control room, Tadhg Beirne and Garry Ringrose were the first of the defeated Irish up. Rob Kearney and Dave Kilcoyne followed, minutes later, and all four tried their best to put words to the grim Irish performance they were part of.

Beirne had secured Ireland two turnovers in a troubled first half - locking onto Ken Owens near his own tryline and duping Josh Navidi into a sealing off penalty - but he also conceded a couple of penalties. Having won a Guinness PRO12 with Scarlets, during his two-season stay, he is fondly regarded in Wales.

The Munster forward admitted that his Guinness Six Nations debut had been far from ideal. "I think I pictured it a bit differently in mind mind but that's the way it goes, you are not going to win every game," he said. "Disappointed to say the least." 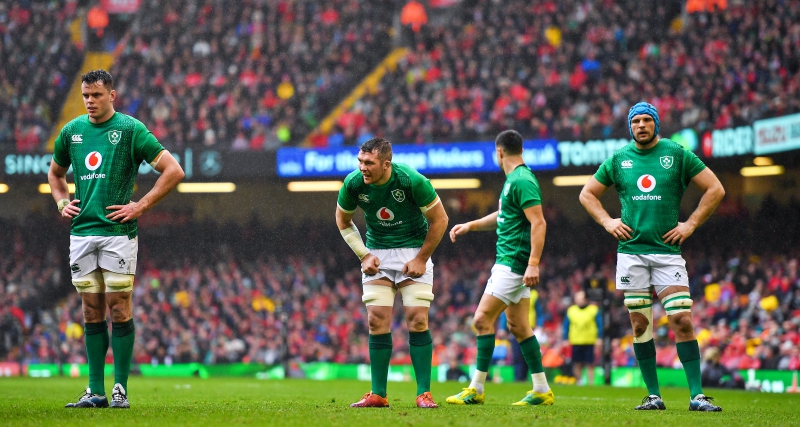 Ireland found themselves 7-0 down after two minutes when Wales bundled Jacob Stockdale out for a lineout, carried well and scored through Hadleigh Parkes after a lovely Gareth Anscombe chip. For Beirne, that was not ideal either. Ireland's intentions, he said, was to 'go after them a bit' but it never transpired that way. He commented:

"Look, you drop balls and errors and some things didn't go our way and it happens some times but you have to keep your head up and keep the faith. Stick to what we know and we just need to move on from this. We'll look back on it and hopefully we'll be able to learn from it too."

END_OF_DOCUMENT_TOKEN_TO_BE_REPLACED

There was an interesting exchange, then, when Beirne rejected the premise - put forward by RTE's Micil Glennon - that the 25-7 loss had seen Ireland struggling with a whole new set of problems. He also baulked at the notion that Wales 'wanted it more'.

Q: What did you talk about in dressing room, were there new problems?

BEIRNE: "I wouldn't say problems to be honest."

Q: Would you not agree there's a problem from a team that beat the All Blacks a few months ago?

BEIRNE: "Not particularly, no. Obviously we haven't played to our potential, that's all the problem is probably.

"I think definitely if we stick to what we know and what we done in the past we'll definitely be able to improve, it's probably about finding our feet again and putting in those performances."

Q: Rory Best said, on Friday, that Ireland would not be found wanting for desire. However, it looked like Wales did want it more.

BEIRNE: "It certainly wasn't the case for me anyway and I can definitely speak for everyone in there, that's not like any player. Everyone goes out there to win and everyone was hungry for this, especially knowing it was Besty's last game in the Six Nations and we spoke about that all week. We were eager to get out there and put in a performance. Unfortunately, it didn't work out today."

Beirne was not the only player to suggest Ireland should go back to what works best for them. Ringrose and Kilcoyne said likewise.

Ireland look to have regressed since their highs of 2018 and even though they finished third in the table, they were in a distant third from the two strongest sides, England and Grand Slam champs Wales.


popular
"Conor Murray was hung out to dry"
Kilkenny youngster pulls off the no-look hand-pass once more
"Ireland don't ever do anything different and that's the worry" - Mike Tindall
One point people keep making about Khabib Nurmagomedov is hugely debatable
Joe Rogan reveals the diet and training plan that keeps him so shredded
"If Murray is playing that first half for England, he's probably Man of the Match"
Former champion Mike Tyson has paid the biggest compliment there is to Tyson Fury
You may also like
16 hours ago
"Ireland don't ever do anything different and that's the worry" - Mike Tindall
2 days ago
Baz & Andrew's House Of Rugby - Twickenham carnage
2 days ago
'Were they up for it more than us? That's my responsibility' - Andy Farrell
3 days ago
The Ireland XV that should definitely start against Italy
3 days ago
'If that was a cricket game, we could have declared at half-time' - Eddie Jones
3 days ago
Triple Crown wrenched away as England scrape Ireland off their boots
Next Page