Wales are the 2019 Guinness Six Nations champions, and with a Grand Slam to boot.

Joe Schmidt's final Six Nations game as Ireland head coach happened to coincide with the worst performance during his six-year tenure. Wales scored early and never let up all afternoon in a raucous Principality Stadium, in Cardiff.

END_OF_DOCUMENT_TOKEN_TO_BE_REPLACED

Ireland got off to the worst possible start as they conceded a lineout off the Wales kick-off. A clean take, a couple of strong carries and a beautiful, outside of the boot chip from Gareth Anscombe and Hadleigh Parkes was scoring a converted try after 71 seconds.

Wales added to the score, on 13 minutes, when Gareth Anscombe knocked over a penalty after James Ryan and then Johnny Sexton were penalised in the space of 90 seconds. Ireland had two great scoring chances, on 23 and 28 minutes, but a Justin Tipuric turnover and a rash CJ Stander mistake gave the Welsh reprieves.

Ireland refused two chances to kick for points and got nothing in return. Wales got every point on offer and it was Anscombe, from 45 metres out, that made it 13-0 when Angus Gardner next raised his arm. He got one more opportunity, just on half-time, and made it 16-0.

END_OF_DOCUMENT_TOKEN_TO_BE_REPLACED

Ireland needed to start the second half at their very best but they did not come close. More mistakes and indiscipline combined to see them in a deep, deep hole.

Anscombe added penalties, on 50 and 55 minutes, to make it 22-0 and both Conor Murray and Johnny Sexton were struggling badly. They were not the only ones.

Ireland's plight was summed up, on 56 minutes, when Sexton passed right out of play after not realising Rob Kearney had drifted in, instead of staying wide. The outhalf shook his head and a watching Irish public repeated the action. That, and the Stander mistake, were the two moments that captured this mess of an Irish performance.

END_OF_DOCUMENT_TOKEN_TO_BE_REPLACED

Bundee Aki thought he had Ireland on the board but Gardner called play back. Instead, it was Anscombe that pulled Wales further out of sight with his sixth successful penalty.

The final score, on a horrible day for Ireland, went to sub Jordan Larmour as Ireland showed heart at the end.

Here's how we rated Joe Schmidt's men in green.

Miscommunication with Sexton cost Ireland a try just before the hour mark. Couple of decent carries.

Decent chase back and calm take forced Josh Adams into a penalty-conceding error. Carried the ball over his line on another chase back to give Wales a five-metre scrum, but there was little he could do.

His four carries for a gain of one metre told a sad tale in itself. Didn't get much better after the break.

Caught out - as most players would be - by that delightful Anscombe chip. Got next to nowhere with his carries. Thought he had a try but the ref had called play back.

Made a great break up the left but spilled the ball forward when tackled by Parkes. Came inside looking to get involved. One good aerial take under pressure but got snagged by Williams on another. Almost had a try at the death after a great take and carry

Was unfortunate to slip over Liam Williams and give away a penalty that put Ireland 10-0 down. Wales ran hard at him and held him into rucks whenever they could, much to Sexton's frustration. Replayed on the big screen giving the ref both barrels as he lost his composure. Kicked out on the full, and badly too, on 44 minutes. Restarts were all over the place too. 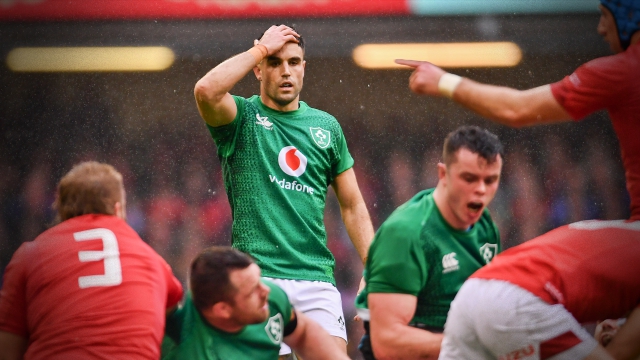 A couple of head high passes to Johnny Sexton did Ireland's momentum no favours. Got wrapped up, ball in hand, by Justin Tipuric for a crucial Welsh turnover on their tryline. Gave away a penalty for offside before half-time. Badly missed Gareth Davies to give up a costly line break. Over-cooked a box-kick, soon after, then sliced a clearing kick out.

Spilled a simple pass as he tried to burst into the Welsh 22. Made up for it by scrummaging well and bashing into Gareth Davies to force an error. That was about the height of it. Committed but rash, at times, and gave away a silly penalty on 50 minutes. Could have had a try in the left-hand corner but could not pick up and dot down.

Lineout throwing was under pressure and Best was feeling it. Poor game and not a great way to sign off his Six Nations playing days.

Irish scrum was struggling just to tread water as the game went on. Not a patch on the Tadhg Furlong that can so often turn in world-class performances.

Gave away a lineout penalty for not closing the gap and it cost his team an attacking opportunity, and penned them back in their half. Made some beastly carries to get his team some front-foot ball. Second half started badly for him as he was held up on a carry and a turnover was conceded.

Took him 12 minutes to make his first big impact and it came in the form of a trademark jackal turnover metres from his own line. Gave away a couple of penalties, though. Did get one back for his side with his feint at a jackal that drew in Josh Navidi.

It's just about the only thing Ireland have got out of Angus Gardner so far but I love these. Tadhg Beirne's dummy-jackal wins a penalty from Josh Navidi. pic.twitter.com/WKeyM2ekKA

Somewhat anonymous (one tackle, one carry, minimal impact at the breakdown) in a dreadful first half for Ireland

The game passed him by and he was outdone by the likes of Tipuric and Navidi. Made only two metres on his four carries.

Will be disgusted with himself for that fumble, under the shadow of the Welsh posts, when he tried a quick penalty penalty and the bounce off his shin forced an accidental offside call. Caught on the wrong side of the rick, on 55 minutes, and penalised for not rolling away.

Try at the death.


popular
Kilmacud Crokes to counter Glen's objection over extra players in All-Ireland final
"He's a serious specimen, 6 ft 3 as well, so he's an incredible athlete" - Geaney hails O'Connor's impact
"He didn't give me that jersey back!" - Johnny Sexton on new rival Jack Crowley
"It's very clear how I felt about it. I had a very definite view on it" - McEntee on Dunboyne's 2005 semi-final saga
January transfer window 2023: Follow the latest updates live in our hub
Roy Keane on Man United's two most improved players since Ronaldo left
Roy Keane's threat to Cesc Fabregas about 'pizza incident' has panel in stitches
You may also like
3 days ago
Liverpool reportedly selling Caoimhin Kelleher for Jude Bellingham funds
3 days ago
Robbie Henshaw on his life-long friendship with Bundee Aki and Netflix documentaries
5 days ago
Evan Ferguson sends Soccer Saturday panel bananas with late equaliser
5 days ago
Eamon Dunphy blames Roy Keane's behaviour for Declan Rice choosing England
6 days ago
Can you name the Republic of Ireland Premier League player from their wikipedia?
1 week ago
Kieran Treadwell the most unfortunate Ireland player to miss Six Nations call
Next Page