Stuart Lancaster was building something good, as England head coach, until it all turned sour on the biggest stage in rugby.

Having beaten the All Blacks in 2013, and gained another couple of impressive scalps, England failed to turn big results into winning runs and trophies [barring a 2014 Triple Crown]. They were denied on the final day of a couple of Six Nations championships yet went into the 2015 World Cup with confidence.

END_OF_DOCUMENT_TOKEN_TO_BE_REPLACED

Joe Schmidt's Ireland had only pipped Lancaster's men to the Six Nations title by points difference and England had several players that had starred on the 2013 Lions Tour to Australia as well as the wildcard selection of rugby league star Sam Burgess.

The World Cup delivered in terms of excitement levels, popularity and quality but England - beaten by Wales and Australia at Twickenham - were left behind in the group stages. Few missed them. Lancaster was moved on and Eddie Jones came in, spurring the bulk of that England squad on to a 2016 Six Nations Grand Slam.

Lancaster needed to rebuild his reputation, and confidence. He set off around the world to broaden his horizons and stopped into Australia, New Zealand and America as well as spending more time with his family back in England. Leinster came calling in late 2016, though, and he could not resist. 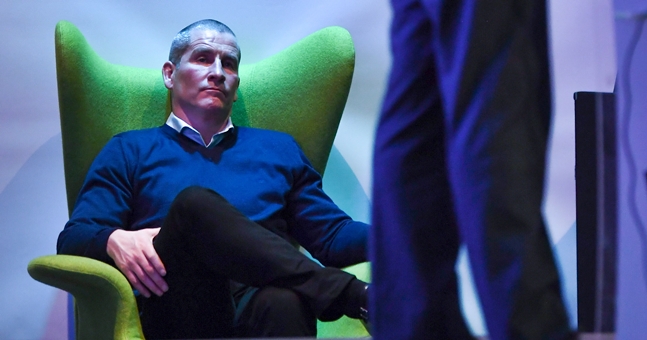 END_OF_DOCUMENT_TOKEN_TO_BE_REPLACED

Leinster head coach Leo Cullen moved into an overseeing role that would be looked upon as 'Director of Rugby' in other set-ups but he still kept a hand in with on-field planning. Lancaster was given the title of 'senior coach' and has been much more hands on. Talk to most of the Leinster players today and they will rave about the impact the Yorkshireman as had at the province.

Leinster's dominant sweep to the Champions Cup final has led to Lancaster getting some positive press in corners of the English rugby press that he has not seen since 2013. It was notable, to me, after Leinster crushed Saracens in the quarter final, the Irish press wrote about 'Leo Cullen's side' while the English reporters were asking to Lancaster's job title again, for their stories.

"They love him over there. Jamie Heaslip puts him up there with Joe Schmidt.

"But the perception in England of him is the historic myth of him failing with the World Cup. So, if there was a job going a couple of years ago or last year, it'd be, 'Ohh, I don't know'."

END_OF_DOCUMENT_TOKEN_TO_BE_REPLACED

Host Chris Jones feels Lancaster is enjoying the new lease of life that the Leinster job, and working with top Irish stars, has given him.

Indeed, Jones has tipped the Englishmen to vye for a job that may well become available after the 2019 World Cup. He commented:

"You've got to be careful. He could go back into a director of rugby job in the Premiership and, look, we've seen three sackings, four sackings this season. And your reputation then can go.

"If I was Lancaster, I'd probably just stay put. He's probably not going to be the England coach again but he could be the Ireland coach. Just keep doing what he is doing."

As we have noted here before, the IRFU (and the Lions) should do all in their power to get Schmidt to remain on in the Ireland job post-2019. If Schmidt does move on, however, Lancaster and Ireland defence coach Andy Farrell will surely both come into the succession conversation.


popular
World Cup 2022 Day 10: All the major action and talking points
Iran demand action by FIFA after USA team change flag on social media
Thibaut Courtois warns teammates after leaks emerge from Belgium camp
"I can absolutely say that I have never enjoyed a job more" - McKaigue revelling in new role as Slaughtneil GPO
World Cup 2022 Day Nine: All the major action and talking points
Roy Keane's issue with Argentina star could rival Graeme Souness and Paul Pogba
"I have equal love for football and hurling" - Sheehy set for two Leinster finals in two hours
You may also like
4 days ago
Former England international admits he wishes he had played for Ireland
1 week ago
Two baffling omissions as four Ireland stars make World Rugby 'Dream Team' of the Year
1 week ago
Josh van der Flier claims World Rugby Player of the Year at Monaco ceremony
1 week ago
"Highlight of my Ireland career" - Behind the scenes as Jack Crowley and Ross Byrne covered for a legend
1 week ago
Bundee Aki reminded us all of his best qualities, on a night Ireland couldn't do without him
1 week ago
Peter O'Mahony delivered some fitting Jack Crowley comments after surprise Test start
Next Page