"It is quite an incredible team they have."

Steve Borthwick has done a commendable job after taking over a Leicester Tigers side that were relegation-haunted for a couple of recent seasons and turning them into title contenders and European headaches for top sides.

It could be an incredible job, yet, but that remains to be seen. They currently lead the Premiership and, this weekend, welcome a stacked Leinster side to Welford Road. The big games are back for the Tigers, and that in itself is worth shouting about.

END_OF_DOCUMENT_TOKEN_TO_BE_REPLACED

Earlier this week, the former Bath, Saracens and England lock sat down for a Zoom chat and laid out the challenge facing his Leicester team.

Borthwick stoked some embers, especially over at Leinster, by saying how the Irish sides were not limited by salary caps. He also noted how the four-time European champions left a battalion of top players at home, when they travelled to South Africa for two recent United Rugby Championship games.

"Look at the size of their squad, the number of internationals and the nature of their league. It is very different.

"Compare that to where we are - the Premiership is a fierce competition and we operate under a salary cap, and that leaves you with a limited squad size. Sending one squad to South Africa and leaving one in Ireland is a different situation. It is one of the challenges we need to overcome. I'm not complaining about it, it's just a fact.

'These guys have been at the top of European rugby for a long time and had a lot of success. They've got 30-odd internationals in their squad - the vast majority of the Ireland team that finished second in the Six Nations. It is quite an incredible team they have." 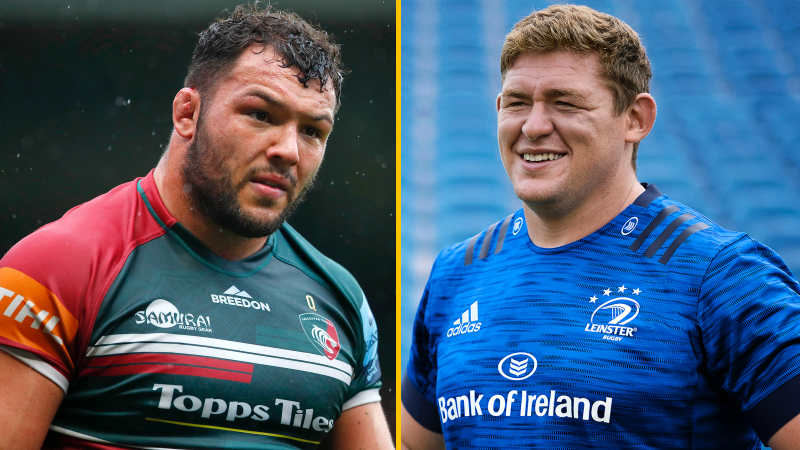 As if to emphasise the depth in big-game experience, particularly in Europe, between Leicester Tigers and Leinster, Steve Borthwick gave an insight to a training ground show of hands.

"What a great competition this is... the places we've been and the teams we've played," he said. "And we're growing from it.

"A couple of weeks ago, we were out at Clermont and I said to the guys, 'Right, who has played at Stade Michelin before?' There were next to no hands. Right, okay.

"A lot of this stuff is new. I asked, 'Who has played Leinster before?' And there's not many hands in the air! This is a new adventure we're on, and we're learning a lot from it."

During his chat with the media, over Zoom, a couple of questions from reporters got short shrift. Asked by one Irish journalist if a Premiership or European Cup title would mean more [they won last season's Challenge Cup but are without a major trophy since 2013], Borthwick reared up.

"It's... that's an irrelevant question. My job is trying to prepare my team for this Saturday. We'll just try do as well as we can for that."

END_OF_DOCUMENT_TOKEN_TO_BE_REPLACED

Back to welcoming Leinster to what should be a hopping Welford Road, Borthwick said, "We get to see where we're at against the best team in Europe, if not the best club team in the world. It's everything we want.

"We've come on loads this season but let's see how far we have come."


popular
Boris Johnson slams Jurgen Klopp for defending Liverpool fans booing national anthem
Gearoid Hegarty's harsh red card leads to a heated debate in The Sunday Game studio
QUIZ: You have 60 seconds to answer one Premier League goalkeeper question
French media rave about Caelan Doris and 'Playstation rugby' from Leinster
Phil Bardsley in heated tunnel exchange after controversial penalty
Erik ten Hag criticised after 'tone deaf' Marc Overmars comment
QUIZ: Can you name these 26 Premier League winners?
You may also like
5 days ago
"He could be one of the world's best" - Sean O'Brien on rugby's latest speed demon
5 days ago
Picking the best sporting moment of the past decade is not simple
5 days ago
"I've probably watched every single Paul O'Connell speech" - Kyle Sinckler
5 days ago
"I hope we are all clear now" - Chris Ashton on post-match apology to James Lowe
6 days ago
James Lowe calls on Leinster fans to give Toulouse fans red-hot welcome
6 days ago
'I've met some of my best friends playing here' - Rugby, Canadian style
Next Page