Peter O'Mahony has ramped it up so many times against England that it was strange to see him so muted at Twickenham.

The Munster captain had a decent game in the home win over Italy, and was retained to the starting XV for Saturday's game against England. The 2017 Lion kept 2021 Lion Jack Conan on the bench, and was selected with the strong England lineout in mind.

END_OF_DOCUMENT_TOKEN_TO_BE_REPLACED

Ireland secured a 32-15 victory over Eddie Jones' men, but they found themselves level at 15-15 after 60 minutes, against a side that had played with only 14 men from the second minute on.

In our ratings, Hugo Keenan (9/10) and James Lowe (8) got our highest scores. On the flip side, we handed out four 5/10 marks to Cian Healy, Tadhg Furlong, Bundee Aki and O'Mahony. All four put in solid, honest shifts but all four will have flown back to Ireland somewhat frustrated by the individual efforts.

Scanning the English media player ratings, Healy and O'Mahony are the two Irish stars that got the roughest ride. 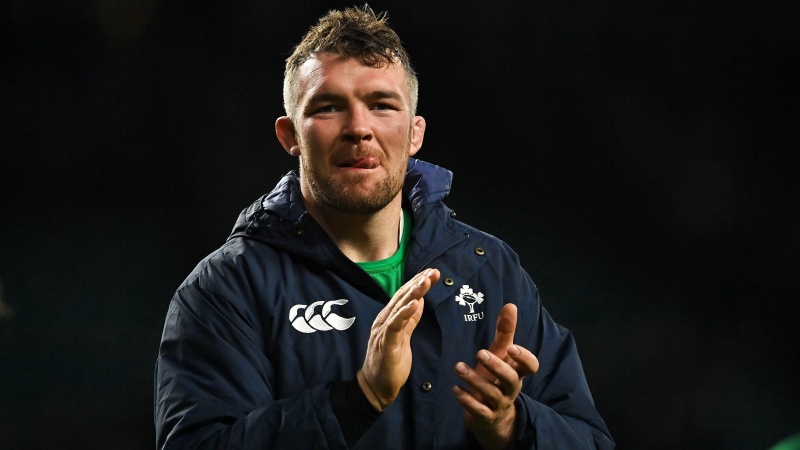 Peter O’Mahony of Ireland after the Guinness Six Nations match against England and Ireland at Twickenham Stadium. (Photo by Brendan Moran/Sportsfile)

END_OF_DOCUMENT_TOKEN_TO_BE_REPLACED

Over in The Guardian, England lock Charlie Ewels got 2/10 for his 82-second outing that culminated in his red card for that high tackle on James Ryan.

Cian Healy did not fare much better in those same ratings by Gerard Meagher. In scoring the veteran Leinster loosehead a meagre 3/10, he wrote:

'Struggled against Sinckler at the scrum and taken off early. Not his afternoon and Ireland badly missed Andrew Porter.'

END_OF_DOCUMENT_TOKEN_TO_BE_REPLACED

Tadhg Furlong only scored 4 in the same ratings, as did Peter O'Mahony. The outlet described the flanker as 'largely anonymous before he was hooked'. Hugo Keenan was the top-rated Irish player in The Guardian.

O'Mahony received a 6 in the Sky Sports ratings, while Healy got the lowest rating from the Ireland starters, with a 5/10 as he 'struggled on his first Test start in a year'.

Stephen Jones was tasked with Ireland player ratings for The Sunday Times, and while O'Mahony and Bundee Aki scored 5s, it was Healy bringing up the rear with a 4/10. The loosehead was criticised for Ireland's scrum troubles which were 'a black mark' against him.

On O'Mahony, Jones returned to a suggestion that he has made previously. He wrote:

'You can't even whisper this in Munster, but Ireland will surely improve with Tadhg Beirne on the flank and bigger locks.'

In isolation, the Munster man may not be entirely pleased with his performance at Twickenham. He has had a very good season to date, though. It will be interesting to see if Andy Farrell sticks with O'Mahony in the No.6 jersey for next weekend's visit of Scotland to Dublin.

Beirne could be an option at blindside, as could shifting Caelan Doris back from No.8. With James Ryan a concussion doubt and Iain Henderson leaking penalties like a sieve, on Saturday, Beirne may be kept in the second row until the end of the championship, at least.


popular
World Cup 2022 Day 10: All the major action and talking points
Iran demand action by FIFA after USA team change flag on social media
"I have equal love for football and hurling" - Sheehy set for two Leinster finals in two hours
Canelo Alvarez duped by fake Lionel Messi Instagram post
World Cup 2022 Day Nine: All the major action and talking points
"I appreciate Moycullen now more than ever" - Cooke's American lifestyle from a Moycullen base
Roy Keane's issue with Argentina star could rival Graeme Souness and Paul Pogba
You may also like
3 days ago
Former England international admits he wishes he had played for Ireland
1 week ago
Two baffling omissions as four Ireland stars make World Rugby 'Dream Team' of the Year
1 week ago
Josh van der Flier claims World Rugby Player of the Year at Monaco ceremony
1 week ago
"Highlight of my Ireland career" - Behind the scenes as Jack Crowley and Ross Byrne covered for a legend
1 week ago
Bundee Aki reminded us all of his best qualities, on a night Ireland couldn't do without him
1 week ago
Peter O'Mahony delivered some fitting Jack Crowley comments after surprise Test start
Next Page