WATCH: Simon Zebo's seismic tackle on Michael Hooper was the very definition of all or nothing

Simon Zebo must have wondered what he had done to deserve a place on the Ireland bench.

He had played well against the All Blacks, twice, but was in reserve while his Munster teammate Keith Earls got the left wing start. Zebo had been suffering from a stiff neck and leg cramps earlier in the week but he would have been determined to hold down his starting spot.

Schmidt went with Earls but had to get Zebo on as early as the 10th minute when Rob Kearney went off with suspected concussion. Into fullback he slipped and it was from there that he put through a grubber kick that bounced up so nicely for Earls to offload and Iain Henderson to dive over. 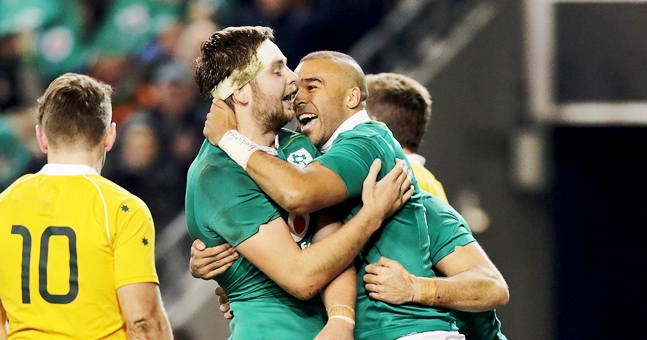 END_OF_DOCUMENT_TOKEN_TO_BE_REPLACED

Just after the half-hour mark and Andrew Trimble's calf strain saw him hobble off. Joey Carbery replaced him, Earls went to the right wing and Zebo was back on the coveted left wing.

He finished out the game there and it was some game. 45 metres gained off 12 carries, which included one line break up the right wing and a couple of lovely offloads.

As well as he played and as hard as Ireland fought, they appeared to be running on fumes in the second half. Australia accumulated 17 points in opening 20 minutes of the second half and Ireland were in a deep, dark place.

END_OF_DOCUMENT_TOKEN_TO_BE_REPLACED

Michael Hooper won his side a penalty on 61 minutes and, when Bernard Foley slotted it over, the Wallabies were four points up and looking primed. Hooper and David Pocock were making hay and the Aussies were sniping from all angles.

The next play was absolutely crucial and even though Australia claimed the restart, Ireland's blitzing defensive press paid off. It was gung-ho stuff and Zebo [circled red] led the charge. 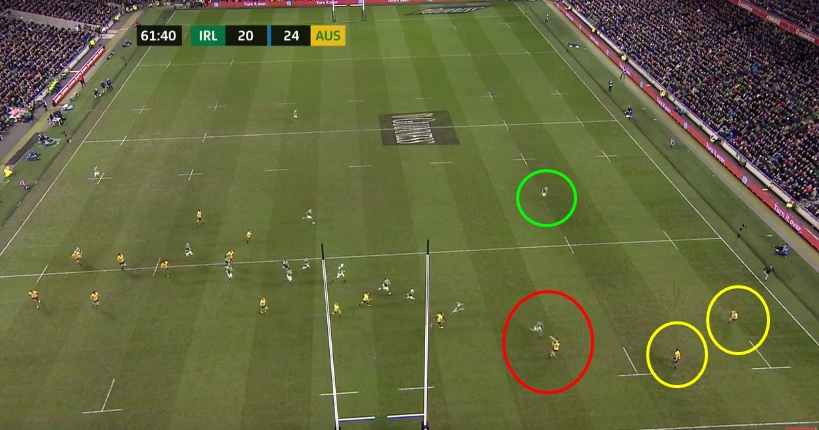 As a looping pass made its way to Hooper, not far from his own tryline, Zebo was already committed. He had tossed in every last chip. He needed to make it too.

Zebo had gambled and he needed to win. Ireland needed him to win.

Australia were forced to kick for touch from behind their own tryline. Ireland gained possession in the Australian half and made it count.

A little over three minutes later and they were over for the match-winning try.

This man was tuned in from the moment he was called into action. It was a joy to behold.


popular
World Cup 2022 Day Ten: All the major action and talking points
Iran demand action by FIFA after USA team change flag on social media
World Cup 2022 Day Nine: All the major action and talking points
For Ballyea, this journey all started out in a purple Toyota Corolla
"I appreciate Moycullen now more than ever" - Cooke's American lifestyle from a Moycullen base
Roy Keane's issue with Argentina star could rival Graeme Souness and Paul Pogba
"I have equal love for football and hurling" - Sheehy set for two Leinster finals in two hours
You may also like
3 days ago
Former England international admits he wishes he had played for Ireland
1 week ago
Two baffling omissions as four Ireland stars make World Rugby 'Dream Team' of the Year
1 week ago
Josh van der Flier claims World Rugby Player of the Year at Monaco ceremony
1 week ago
"Highlight of my Ireland career" - Behind the scenes as Jack Crowley and Ross Byrne covered for a legend
1 week ago
Bundee Aki reminded us all of his best qualities, on a night Ireland couldn't do without him
1 week ago
Peter O'Mahony delivered some fitting Jack Crowley comments after surprise Test start
Next Page