Sean O'Brien chokes back the tears after performance of vintage destruction

It was the final question - the kicker - that got him.

Sean O'Brien is into the final straight of his Leinster career. He does not have many games left, and he knows it.

There were two striking observations at the end of Leinster's 30-12 Champions Cup semi final win over Toulouse - this was Johnny Sexton's first Leinster game of the year, and this was Sean O'Brien's last game for his home province at the Aviva Stadium.

O'Brien, who always seems to be battling back from one injury or another, looked to have been left behind by the brutality of modern rugby. His body must have taken one seismic blow too many, we assumed as we watched his number raised in Rome and Cardiff during the Six Nations.

'The Tullow Tank' would be off to pastures news, in the English Premiership, next season but he would most likely be spared the all-out assault of Test rugby. That he managed to make 61 Test appearances (56 for Ireland, 5 for the Lions) and that we are still counting is an achievement in itself.

This lad has been through the wringer more times than Trigger's mop.

However, with Leinster down Dan Leavy, Josh van der Flier and Rhys Ruddock, O'Brien strapped up again and went at it. He was sent hurtling backwards when he tried to prevent one early carry from Charlie Faumina, but he gradually grew into the contest.

Toulouse had prospered, in the group stages, by slowing Leinster at the breakdown. No chance of that today, with Scott Fardy, Devin Toner and O'Brien clearing house. The openside finished with 12 carries, 14 tackles an inordinate amount of work around the breakdown. 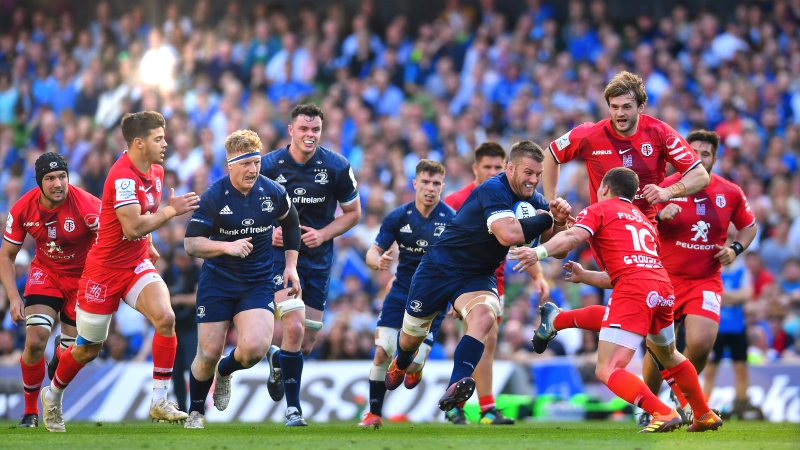 "Seanie is an unbelievable competitor, he has worked incredibly hard to get back from his injury," Leinster head coach Leo Cullen said after the game.

“You can see what it means to Seanie, the way he plays. He physically throws everything he has into his performances. I thought he was really exceptional today.

“It’s not just performance, it’s how he leads the group and how he talks in the week. How he understands the threats the opposition is going to pose on both sides of the ball.

“In terms of dominating that contact area, he’s one of the best players I think to have played the game, certainly Irish guys. He’s showing again what he’s capable of.”

END_OF_DOCUMENT_TOKEN_TO_BE_REPLACED

Channel 4 were clued in to the fact that this was an Aviva swansong - in Leinster blue - for O'Brien. They got his take on a well deserved win then hit him with the killer question - 'One step closer to finishing your Leinster on a massive high. It must mean a lot?'

O'Brien was teetering throughout the interview and he choked back the tears to finish out strongly.

"It’s a tough day for me here actually today.

"The last game in the Aviva for me, probably… so nice to finish with a win anyway."

.@SeanOBrien1987's emotions are very close to the surface as he reflects on a momentous victory in one of his last few games in the @leinsterrugby jersey he has graced for so long#C4rugby #LEIvTOU pic.twitter.com/kTw5Ja0muS

London Irish may be getting a player who is not of the same calibre as O'Brien 2010-2017 but they are still getting a warrior, and one that is capable of mixing it with the very best on his day.


popular
QUIZ: Name the last clubs these footballers played for before joining Manchester United
SportsJOE 2000s Football Quiz | Round 1
QUIZ: Name every All-Ireland football winner of the last 33 years?
The SportsJOE 12 o'clock quiz | Day 68
The SportsJOE 12 o'clock quiz | Day 67
"I went up to the hotel, got attacked in the room and told I'm no longer Tipperary captain"
QUIZ: Name these footballers based on their former teammates
You may also like
2 weeks ago
Ryan Baird on his physical and mental preparations to hit rugby's return running
2 months ago
"Play him as soon as possible" - Ryan Baird exceeding great expectations
3 months ago
The future of Leinster and Ireland's second row is officially here
3 months ago
Guinness Pro14 preview: Leinster v Glasgow
3 months ago
Pro14 preview: Leinster v Cheetahs
4 months ago
Leinster get Saracens as Champions Cup quarter finals confirmed
Next Page