Leinster versus Saracens at St James' Park, Newcastle is going to be a cracker.

The two best sides in Europe will contest the 2018/19 Champions Cup final, next month, after Leinster joined Saracens by outclassing and outworking Toulouse at the Aviva Stadium.

Leinster's 'Drive for Five' looks in good shape and they reached their fifth final in 10 years thanks to tries from James Lowe, Luke McGrath and Scott Fardy, and a superb performance from Johnny Sexton.

Toulouse came out of the blocks fast and winger Cheslin Kolbe was looking a handful. They were the first to get the scoreboard moving, through Thomas Ramos, but a Johnny Sexton penalty soon had the scores level.

Leinster found their groove, with Sexton prodding and probing, and they soon breached the Toulouse defence. Sexton ran an agggressive line, Cian Healy made yards and Sean Cronin sucked in defenders.

Luke McGrath was on hand to keep the attack going and Sean O'Brien passed to James Lowe, who still had two men to beat. Not a bother to the Kiwi, and he showed great awareness to roll and touch down after the covering tackle spun him on his back. Try number 20 in 27 Leinster appearances for Lowe.

Sexton showed the scope of Leinster's ambition with a 50-metre drop goal attempt, that dropped just short, then Jordan Larmour and Lowe combined for a quick-tap on their 22-metre line. Robbie Henshaw had a great banana kick to touch and was up the pitch, 15 seconds later, when Yoann Huget took a quick throw and Toulouse tried to kick clear.

END_OF_DOCUMENT_TOKEN_TO_BE_REPLACED

From the resulting set-piece, Richie Gray was yellow-carded and Leinster scored from a rolling maul, off an attacking lineout. Scott Fardy got the back-slaps but the score belonged to Luke McGrath.

Ramos reduced the arrears to 11 with a penalty, just after the hour mark. The half ended with Henshaw in the sin-bin and with Lowe having a second try ruled out for a TMO-confirmed obstruction penalty against Jack Conan. HALF-TIME: Leinster 17-6 Toulouse 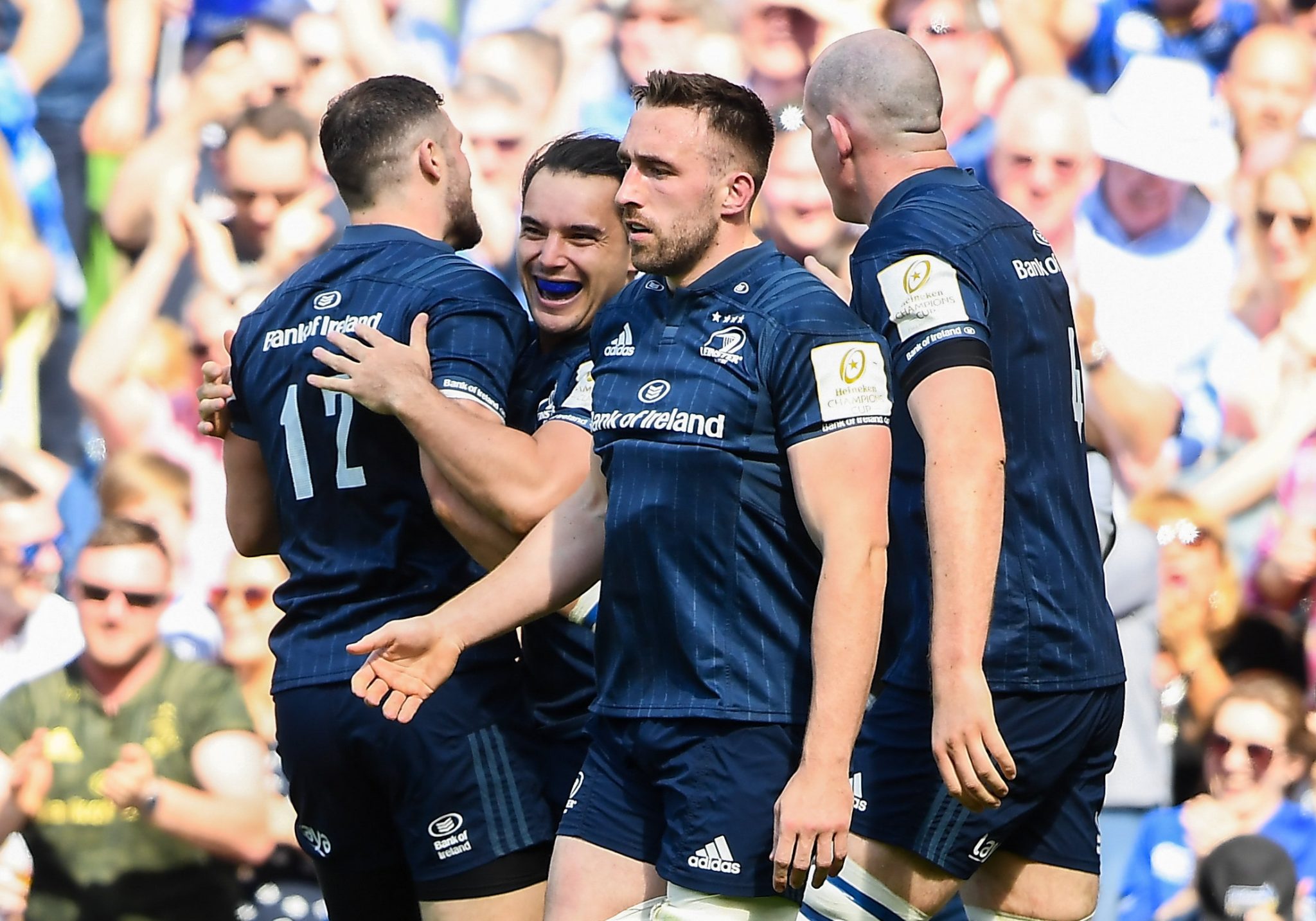 First blood (after Scott Fardy going off to get a cut patched up) went to Toulouse as Garry Ringrose was whistled by Wayne Barnes for a high tackle. Jerome Kaino instructed Ramos to go for the posts and his penalty made it 17-9.

Inspired by the lively Lowe and scheming, ambitious Sexton, Leinster were over for their third try of the game, on 54 minutes. They came close with a couple of rolling mauls but the backs eventually got a taste. Sexton found Jordan Larmour with a looping pass but the winger was hauled to ground. The forwards piled back in and it was Scott Fardy that powered over from five metres out. Sexton nailed his third touchline conversion and it was 24-9 heading to the final quarter.

Ringrose then denied sub Maxime Medard a try with an excellent covering tackle, after a chip over the Leinster lines. Toulouse did not return to their half empty-handed, though, as Romain N'tamack knocked over a penalty (Sexton high tackle).

Toulouse were not giving up and were making Leinster hit bodies and battle fiercely to protect their line. Their chances looked all but gone when, with his last act of the game, Sexton kicked over another penalty to make it 27-12 with 14 minutes to go.

James Lowe was denied his second when the ball popped from his grasp with the tryline beckoning, but sub Ross Byrne dinked over a penalty that had already been signalled for by Barnes.

Two semi finals that were not even close, and two deserving victors.

OUR MAN OF THE MATCH: Johnny Sexton (Leinster)


popular
The SportsJOE 12 o'clock quiz | Day 291
Roy Keane story shows the power he had at Manchester United
Three players locked in Ireland jerseys after Thomond Park trial
McGregor admits shout from Dustin Poirier's corner got inside his head
Jolie Poirier certainly let her voice be heard after her husband's win over McGregor
McGregor's first words to Poirier after defeat show where the damage was done
He'll be remembered as a footballer but Keith Higgins has always been a hurler
You may also like
2 weeks ago
Leinster remind Ulster who's boss with impressive second half swagger
3 weeks ago
Story of teenage Ryan Baird in Leinster gym tells us an awful lot about his athleticism
3 weeks ago
Leinster without several senior stars for Connacht after positive Covid-19 tests confirmed
2 months ago
'He has that fiery edge' - James Lowe and his truce with Ireland's Munster crew
2 months ago
39 months later, one of the best rugby stories of the year happened in Glasgow
2 months ago
"There is no doubting Baird is a future Irish second row, long-term" - Paul O'Connell
Next Page