For the Cork native, this is his third European Cup win, but first as coach.

Ronan O'Gara could barely contain his emotions as his La Rochelle side became the champions of Europe for the first time in their history.

The former Munster and Ireland outhalf spoke superbly on the pitch, at Stade Velodrome, this evening after his Stade Rochelais side beat Leinster 24-21 to win the Champions Cup for the first time in their history.

END_OF_DOCUMENT_TOKEN_TO_BE_REPLACED

The French side have long lingered in the lower reaches of this sport, in a rugby mad country, but reached the summit after deservedly beating Leinster, in Marseille.

"I don’t think you’ve any idea," Ronan O'Gara began, after being asked what this victory meant.

"Where we started was a long way away from dreaming of getting to finals," he told Channel 4.

"I’ve got to thank those boys... it was easy to keel over and lose today, but that’s not us. We have a little bit of balls about us. We found a way to win. Was it pretty? No. Mentally, this is the start of a good journey for this team.

"This team was second division eight years ago. Now we are playing with the big boys, and why not, why not us? ... They are all warriors. Potentially the first time Leinster haven’t scored a try in a knockout game. The defence was everything." 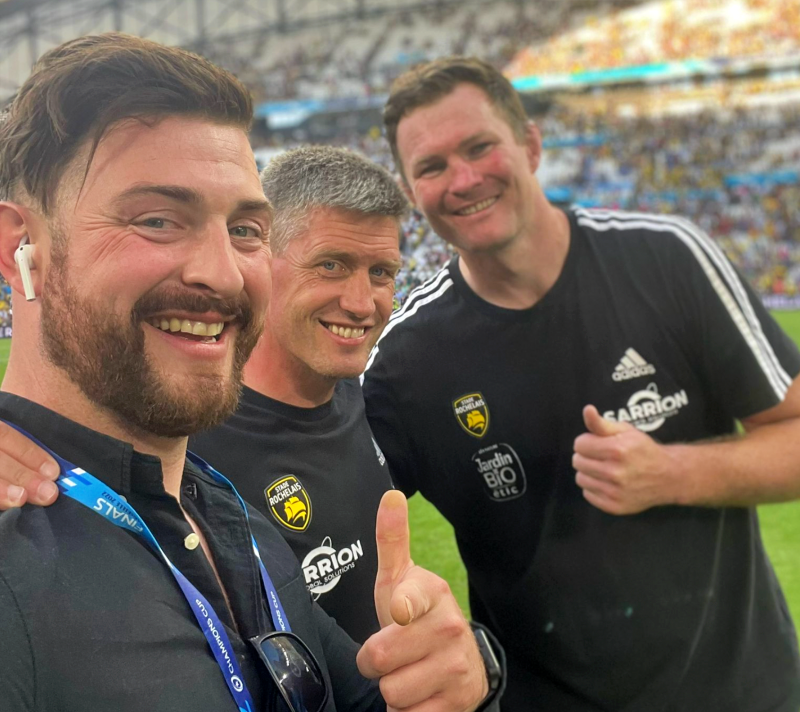 Ronan O'Gara and Donnacha Ryan celebrate on the pitch after their Champions Cup win. (Credit: Sportsfile)

La Rochelle trailed 12-7 at the break, but dominated the second half and were deserved winners.

"I knew defensively, the way we’d set up, we wouldn’t let the play... we did a lot of homework and the Connacht and Leicester games gave me a lot of ammunition to work with... if you stand off them it’s going to be like the Aviva.

"We’ve got to be proud of the way we defended ... do you know, there was great heart. At 18-10 we could have rolled over ... this is the start of something special, I hope.

"It went down to a one-point game ... the scrum was very good ... The discipline near the end, if you lose that ... the quickest way to the try-line is straight."

END_OF_DOCUMENT_TOKEN_TO_BE_REPLACED

When it came down to the crunch, the La Rochelle forward pack bossed their Leinster counterparts in the closing stages.

"When you’re starting to dissect it live it’s hard because I see it as a No 10," Ronan O'Gara mused, when BT Sport caught up with him.

"But we thought we’d have an advantage [up front]... for us, it’s hard, people don’t get the 23-man game ... we knew Leinster are usually out of sight at half-time... the boys were sunk at half-time but I was like, 'What’s your problem? The data shows we score most of our tries in the last 20'.

"It feels a little bit surreal. It was such a tense game. 10 months ago we went to Racing and got beaten 49-0 ... There was infighting, it was carnage.”

"Artur Retiére is an average nine and an average wing but he’s a brilliant rugby player without a positio ... it helps that he’s four and a half foot!"

"Should be carnage on the Port for the next four days!"

It's the chat we've been waiting for, he's always a fascinating listen.

A well-deserved won for a coach in his absolute element.

For all you Ronan O'Gara fans, get this Channel 4 footage in, too.

Some man for one man.


popular
World Cup 2022 Day 10: All the major action and talking points
Iran demand action by FIFA after USA team change flag on social media
"I have equal love for football and hurling" - Sheehy set for two Leinster finals in two hours
Canelo Alvarez duped by fake Lionel Messi Instagram post
World Cup 2022 Day Nine: All the major action and talking points
"I appreciate Moycullen now more than ever" - Cooke's American lifestyle from a Moycullen base
For Ballyea, this journey all started out in a purple Toyota Corolla