Ronan O'Gara is champion of Europe for the third time in his career, and the first as a head coach.

Leinster looked like they had dome enough to secure a fifth star, but they flagged badly in the second half and La Rochelle were deserved winners.

The first half saw Leinster at their flatest in a long time. La Rochelle brought the fight, but Leinster had the cup nous. They conceded a try but led 12-10 at the break. 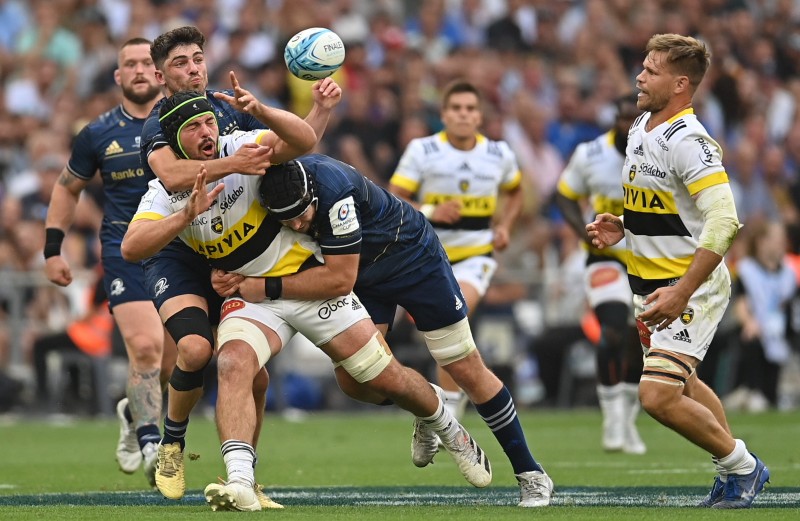 The start of the second half saw Leinster put the boot down, in front of a crowd of 59,682, and they added two penalties two their half-time lead.

END_OF_DOCUMENT_TOKEN_TO_BE_REPLACED

La Rochelle came roaring back, though, and Pierre Bourgarit scored after a sustained period of pressure for the French sides. They then, after slow-mo replays, copped a yellow card and Leinster went 21-17 ahead with 15 minutes to play.

Thomas Lavault's needless yellow card mad it Leinster's advantage for the final stretch, but a Ross Byrne knock-on, with 13 to go, gave Ronan O'Gara's side a sniff.

The last 10 minutes was all La Rochelle and their endeavours were rewarded with a late, converted Arthur Retiere try that clinched the match.

Ronan O'Gara had more than enough heartbreaks in Europe, over the years, with Munster, Racing and La Rochelle. Tonight, in Marseille, he is a deserved winner. Again.


popular
Roy Keane cracked up Ian Wright and Gary Neville with England team spirit remark
Roy Keane shoots down ITV presenter's 'excuse' for England's draw with USA
'I was so stressed the week before the All-Ireland and I ended up having a panic-attack' - O'Shea and O'Sullivan open up
World Cup 2022 Day Seven: All the major action and talking points
Wales supporter who travelled to World Cup with his son dies in Qatar
The nine England World Cup footballers who could have played for Ireland
Amancio Ortega interested in buying Man United from Glazers
You may also like
4 days ago
"Two Irish players are best in the world" - Rugby reacts to big Josh van der Flier and Terry Kennedy awards
5 days ago
Two baffling omissions as four Ireland stars make World Rugby 'Dream Team' of the Year
5 days ago
Josh van der Flier claims World Rugby Player of the Year at Monaco ceremony
5 days ago
"Highlight of my Ireland career" - Behind the scenes as Jack Crowley and Ross Byrne covered for a legend
6 days ago
Bundee Aki reminded us all of his best qualities, on a night Ireland couldn't do without him
6 days ago
Peter O'Mahony delivered some fitting Jack Crowley comments after surprise Test start
Next Page