Romain Ntamack and Toulouse got a good taster for a rocking rugby atmosphere at the Aviva Stadium, on Saturday. Next weekend, the reigning European champions will be back to see if the Leinster supporters can top the reception afforded to them by the Munster faithful.

Toulouse held their nerve and, with Ntamack, Antoine and Thomas Ramos stepping up in the place-kicking competition, beat Munster 4-2 in the shootout format after an absorbing match had ended 24-24 after full- and extra-time.

Amid the block solid tension at the ground, there was a moment of levity when Ntamack [see below, from 5:20] thought his kick, the third from Toulouse, had won the game.

It almost never happens in rugby...

Munster and Toulouse locked at 24-24 after 80 minutes plus extra time, it all came down to a 𝗽𝗹𝗮𝗰𝗲 𝗸𝗶𝗰𝗸𝗶𝗻𝗴 𝗰𝗼𝗺𝗽𝗲𝘁𝗶𝘁𝗶𝗼𝗻!

Romain Ntamack on his premature celebration

END_OF_DOCUMENT_TOKEN_TO_BE_REPLACED

As his kick sailed over the bar, Romain Ntamack pumped both arms in the air and pointed to the heavens. It was a clutch kick, but it was not the winner.

Both teams could have ended up taking six kicks apiece, but Toulouse only needed four [all successful] with Munster missing three of their five shots.

Following the game, the France outhalf told Rugbyrama that he did indeed feel his kick was the game-clincher. He commented:

"I knew each side had three kicks along the 22, but I thought [the shootout] would only continue from 40 metres, at that stage, if the scores were level.

"When I raised my arms, I saw no-one was moving. It was a little uncomfortable, especially with regard to Munster.

"I thought the game was over, and I apologised to the Munster players at the end. Well, it's a good anecdote now." 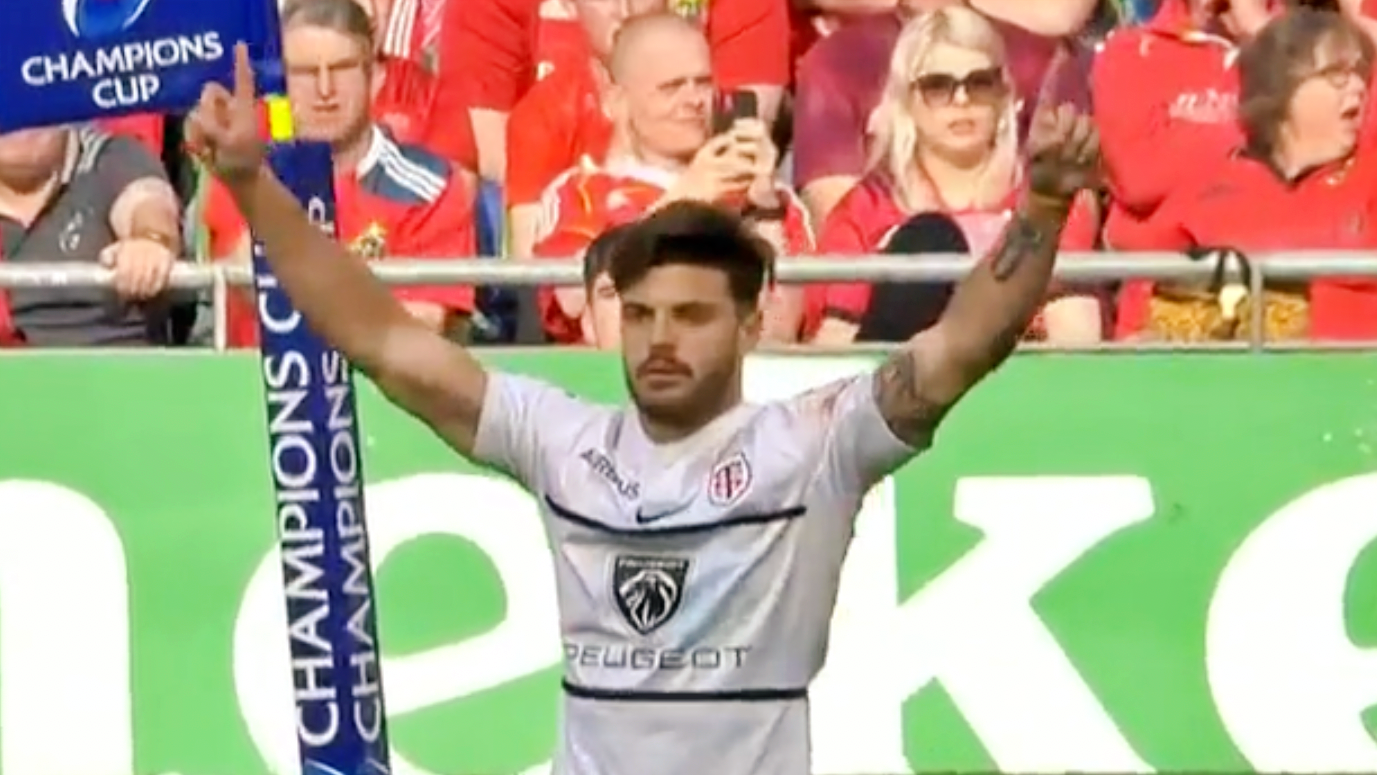 END_OF_DOCUMENT_TOKEN_TO_BE_REPLACED

After the initial burst of players sprinting from the sideline to celebrate with Ntamack, Dupont and Ramos, the Toulouse squad quickly composed themselves and went around chatting to, and consoling with, the Munster players.

Asked why the celebrations were so muted, Romain Ntamack said, "No, there wasn't much strength left. And then there was the respect for Munster and their home crowd, who were very respectful during the penalty shootout and the game in general.

"We could have been in their place... We were happy but we didn't need to celebrate or do too much. We haven't won anything yet."

Next up for Toulouse is a semi-final against Leinster at the Aviva Stadium on Saturday, May 14.


popular
Boris Johnson slams Jurgen Klopp for defending Liverpool fans booing national anthem
Gearoid Hegarty's harsh red card leads to a heated debate in The Sunday Game studio
French media rave about Caelan Doris and 'Playstation rugby' from Leinster
Dani Alves names Liverpool midfielder as the "most annoying" player he's come up against
QUIZ: Can you name these 26 Premier League winners?
QUIZ: You have 60 seconds to answer one Premier League goalkeeper question
If you're going into battle alongside Gareth Mckinless, then you will always have a chance

You may also like
5 days ago
"He could be one of the world's best" - Sean O'Brien on rugby's latest speed demon
5 days ago
Picking the best sporting moment of the past decade is not simple
5 days ago
"I've probably watched every single Paul O'Connell speech" - Kyle Sinckler
5 days ago
"I hope we are all clear now" - Chris Ashton on post-match apology to James Lowe
6 days ago
James Lowe calls on Leinster fans to give Toulouse fans red-hot welcome
6 days ago
'I've met some of my best friends playing here' - Rugby, Canadian style
Next Page