Was anyone expecting that?

12 months ago, Jordan Larmour dotted down in Cardiff with the clock in the red to stop Ireland from being nilled in an appalling performance, while Wales took the Grand Slam in style. 12 months on, Larmour put the ball down after a scintillating run as Ireland set up a bonus point win over their Celtic rivals.

It wasn't all plain sailing for Andy Farrell's men, however. They were under the pump for a huge period in the second half, relying on a number of  huge interventions to keep Wales at bay and rack up their second home win on the trot.

Ireland travel to Twickenham in two weeks looking to secure a Triple Crown, and potentially set up a Grand Slam decider against France in Paris on the final weekend of the tournament... But not let's get ahead of ourselves. That tends not to end well now, does it?

Here's how we rated Ireland:

Always offering something different from 15, and again put in a really solid shift defensively in trying conditions. His try was a perfect example of why he now holds that jersey, and he will be hard to shift from it in the coming weeks and months.

Brilliant from start to finish. Really brilliant work defensively, both in the tackle and in his fielding, and relieved pressure at key times with some audacious kicking. That's his jersey, and he's my man of the match.

END_OF_DOCUMENT_TOKEN_TO_BE_REPLACED

Brilliant at 13, where Ireland ran so much ball through him. Made 78 metres off just 8 carries in the first half, but had his second half cut short by a HIA replacement. Unfortunate, as he was growing into a potential Man of the Match performance.

Really solid performance after having his partner in crime replaced due to injury both before and during the game. Another impressive outing from the Connacht centre.

Started incredibly lively, with a lot of traffic going down his wing while Ireland enjoyed some early dominance. Always a livewire and a threat, and moving back into the form in green that saw him light up the tournament in 2018.

There will again be big questions over his ruckside manner, seemed to get referee Romain Poite on the wrong side early on and never really shook that. Good in attack and defence as always, but is he the right man to hold the captaincy after this tournament? 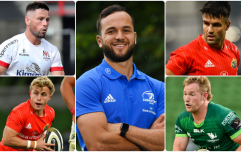 END_OF_DOCUMENT_TOKEN_TO_BE_REPLACED

An improvement on last week, quicker off the ruck and a lot more zip to his passes. May feel the heat once Cooney (assumedly) starts against Italy, but Andy Farrell is yet to see a glaring reason to drop the Munsterman.

The first man off the pitch, and never really made too much of a dent in the game. Could he be in danger of dropping down the pecking order?

Will be much happier with Ireland's lineout and scrum, even if there were a couple of wobbles, and carried very well going forward. Competition from Kelleher will keep him on his toes.

Showed every ounce of pure Wexford beef in his bones to muscle over for his first half try. Once again brilliant carrying, always looking for the extra yards and showing silky hands at crucial moments. 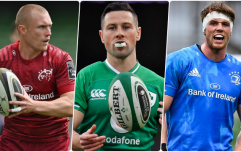 END_OF_DOCUMENT_TOKEN_TO_BE_REPLACED

A quiet game by his standards, but nevertheless he will be happy with his effort in defence.

Will be disappointed somewhat with a couple of wayward lineouts, but once again a tireless performance from Ryan.

Another brilliant performance from O'Mahony, abrasive in the carry and such a weapon in the Irish defence. Put him under pressure and he turns into a diamond. Brilliant stuff.

Yet again a standout performer in green without putting a foot wrong. Bundled Biggar over in first few phases, somehow always the first man to a ruck or attack. His try means he'll get more attention than usual, but he'll be happy to put that red-scrumcapped head down and just keep plugging away.

Wow. What more can you say about a man who many questioned his space in the squad let alone in the starting side. Turnover after turnover, carry after carry. Deserves every plaudit he gets.

On for Herring for final 10 minutes when the hard work was done. He will want a chance to prove himself before the end of the tournament.

On for Healy in 51st minute, instrumental in Ireland's huge scrum penalty. Could replace Healy for the English clash.

Replaced Furlong in the 67th minute and was solid where he was needed.

Solid when called upon, but not too much to be done in his department either.

Great to see the young backrow make his debut, and he will take heart from it. So much more to come from him.

7 and a half minutes is not enough for a player of his ability. He will be chomping at the bit to make his dent in green, but he may need to wait until the summer to do that.

Replaced Sexton for the final 10 minutes. Not much to be done, bar a missed conversion.

Asked to come on in centre after Robbie Henshaw's HIA, and really performed well against a traditional strength of this Welsh side. Showed lightning quick hands to set up an exciting Ireland attack, and never shirked a tackle.

popular
Only old-school fans will get 20/20 in this 1990s footballers quiz | Part 2
The SportsJOE 12 o'clock quiz | Day 186
Rio Ferdinand story about Dwight Yorke conversation shows Alex Ferguson's ruthless streak
Sam Bennett's green jersey masterclass got Lance Armstrong talking
The SportsJOE 12 o'clock quiz | Day 185
QUIZ: Identify the football club from these 12 crests
Irish cyclist Sam Bennett delivers classic putdown to British cycling magazine
You may also like
31 minutes ago
QUIZ: Can you beat the clock to name Ireland's record goalscorers?
1 week ago
"We'll have to be 10 times better than we were against Ulster" - Robin McBryde
1 week ago
Anthony Stokes has Livingston contract terminated after Astro Turf struggles
1 week ago
Andy Farrell will be sorely tempted to finish the Six Nations with these lads
1 week ago
Controversial disqualification gives Sam Bennett massive green jersey boost
2 weeks ago
'We had a coffee, a scone, a chat and I agreed to join Leinster that day' - Isa Nacewa
Next Page