Surely a good omen for Ireland's upcoming clash with England?

Former Munster and Ireland scrum-half, Peter Stringer was a guest on BT Sport's Rugby Tonight show, on Monday, and took on Austin Healy - he of Leicester, England and Lions fame - in a passing competition. 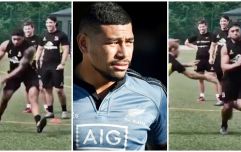 WATCH: Charles Piutau introduces himself, and side-steps, to Ulster teammates

END_OF_DOCUMENT_TOKEN_TO_BE_REPLACED

The 'battle of the scrum-halves' premise was to ping the bullseye - or close to it - on an electronic pad located 10 metres away.

Stringer hit two bullseyes and came close on another couple of occasions.

Healy had a nightmare. It was like his 2001 sparring match with Brian O'Driscoll all over again.