"The speed - that was the biggest thing. The noise, speed and intensity."

Back on February 5th 2000, Ireland went to Twickenham and got the mother and father of all beatings from a ruthless England side.

Warren Gatland's side looked to be carrying a three-month hangover from a World Cup campaign that had seen them lose a quarter final playoff to Argentina at Stade Félix Bollaert in Lens. Ireland trailed 25-3 at half-time and would go on to lose 50-18.

END_OF_DOCUMENT_TOKEN_TO_BE_REPLACED

I watched that match in a pub in Cardiff. It was pretty horrific. I had played with the ‘A’ side against England the night before, at Franklin’s Gardens, at we had got by them. I was with my brother, Guy, and we had both played reasonably well. We went back to Cardiff to watch the main game. It didn’t go particularly well.

This was the first ever staging of the Six Nations - expanded from five to welcome Italy - and Ireland were out of the running after just one game. If Ireland thought they could use the same old faces to right the wrongs of that World Cup, their record defeat at Twickenham hastened a re-set.

END_OF_DOCUMENT_TOKEN_TO_BE_REPLACED

We made a tactical switch with the Irish team. We were playing Scotland next and the decision was made, let's put it that way, that we would blood in new players for that, and that we would change our strategy. I felt that we had some really good, young backs.

We had Brian O'Driscoll, we had Ronan O'Gara and Peter Stringer, who was the best passer in the world. We had people like Denis Hickie that had been around the block, Girvan Dempsey had fallen out of favour [previously] and we had Shane Horgan on the wing. I always felt we had a good, talented backline but, at that time, we had been playing a very forward-orientated game.

After Twickenham, we brought some fresh faces in and said, 'Let's change it. Let's give the ball to the backs more, to get over the gainline, and let the forwards run off that'. 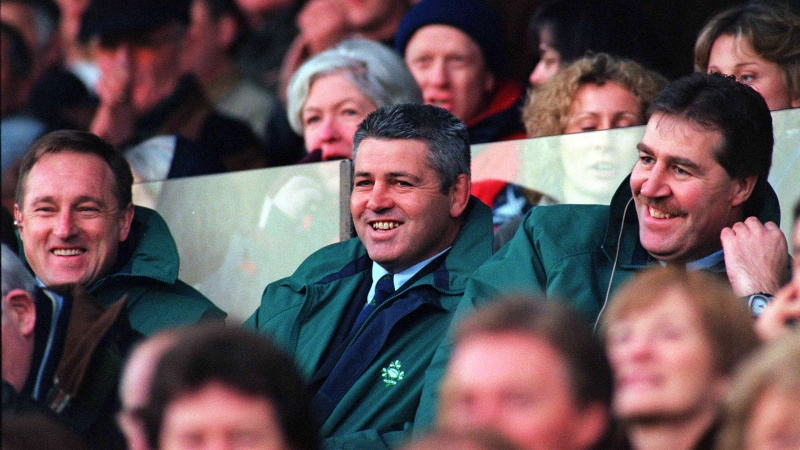 END_OF_DOCUMENT_TOKEN_TO_BE_REPLACED

The future was in the hands of those young fellas. You look at the five players that played against Scotland in February 2000 - O’Gara, Hayes, Peter Stringer, Shane Horgan and Simon Easterby - they would go on to play with distinction for the next decade.

It was obviously important. I hadn't played with Strings and ROG, but I'd played with Shane and had seen Hayes and Simon coming through. I think any injection of youth brings a lack of baggage with them. And it felt like that team, from the late 90s, was carrying a good bit of baggage, particularly from that (1999) World Cup in Lens, as well. We needed fresh blood in there.

For the next game, against the Scots, Warren Gatland recalled Leinster backs Girvan Dempsey and Denis Hickie, and dropped Bob Casey for Mick Galwey. However, all the talk was about the five players Gatland would be giving Test debuts from the off - the Munster trio of Peter Stringer, Ronan O'Gara and John Hayes, along with Llanelli flanker Simon Easterby and Leinster's Shane Horgan. 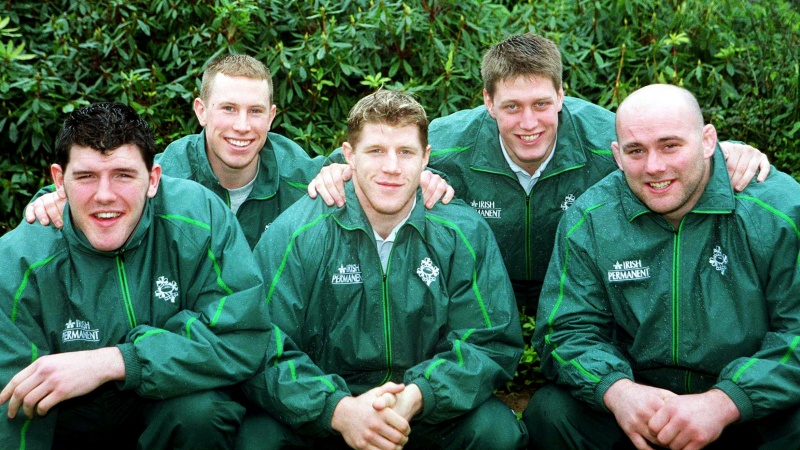 We had had a really disappointing 1990s and it was the beginning of that new crop of players coming through. And I think it's just about marrying the old with the new. You have to hold onto a certain amount of experience, but then bring through that new blood to be able to play with the freedom that only young people can.

I’d played Under 21s but then won a single ‘A’ cap against Canada. I had a barren patch for about three years where I wasn’t getting a look-in. I felt like I was in a good position, though, and got the call-up, along with a few others, on the Sunday after that big loss at Twickenham. We were named in the side, a week later, at the Glenview in Wicklow. It was surreal but the start of a real change in Irish rugby. Five new caps.

I started off at outside centre, and then a guy called Brian O'Driscoll came along and made things a little more tricky! So I thought I'd go to inside centre and I played 12 for a very long time. My first senior game as a wing was my first game for Ireland.

I was 26, so was the oldest, compared to some of the youngfellas. Luckily enough, the squad was named early in the week so we got to know from the Monday night. We got the whole week leading into it just knowing [we were playing] and experiencing the whole buzz and excitement of knowing what was coming. And then to just run out at that old Lansdowne Road was something else. The thrill of it was something else.

Gatland’s selection may have had the appearance of a roulette spin but, as opposed to former Ireland head coach Brian Ashton in 1997, he was choosing players that were punching in impressive Heineken Cup performances.

Stringer and O'Gara were already turning heads at Munster. Stringer had been included on the replacements bench at Twickenham but, somewhat mercifully, he was not brought on for the carnage. As the anthems rang out at Lansdowne Road - over a decade before it was revamped and sponsored by Aviva - Munster lock Mick Galwey clutched his half backs close, like a mother hen. 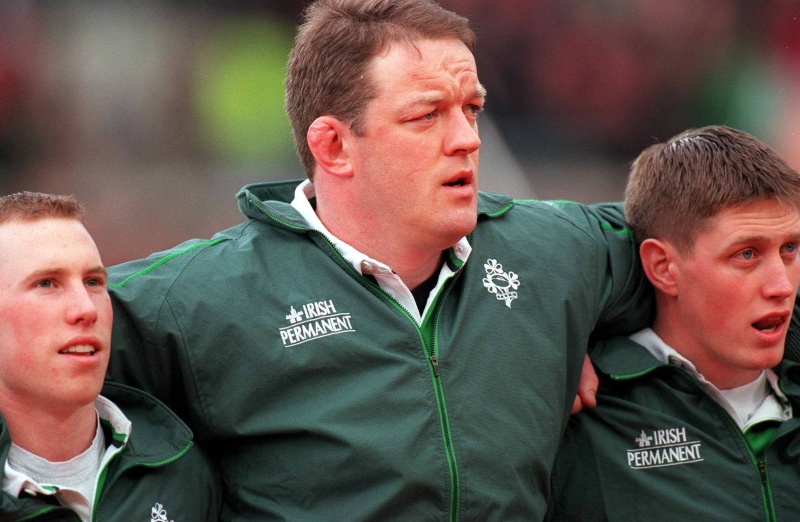 Peter Stringer, Mick Galwey and Ronan O'Gara pictured during the anthems at Lansdowne Road, in 2000. (Photo by Damien Eagers/Sportsfile)

That first cap, without a doubt, is my favourite memory from all my time playing for Ireland. It was just brilliant.

I think we were down 10-0 after about 10 minutes. There may have been so many new caps on the day, but no-one panicked.

Indeed, Ireland did go down 10-0 - all courtesy of Scotland's Kenny Logan - but O'Gara was already stamping his authority on the game. He was instrumental in Malcolm O'Kelly's try, which he converted. He then kicked two penalties and Ireland led 13-10 at the break.

ROG was an amazing link player. We were lucky that for most of that era [the 2000s], we had Stringer at 9 and ROG at 10, and the speed and the flatness of the ball was never something we had to worry about. We had a constant stream of good ball.

I won a few line-outs and would have been blowing out of my back-end a bit for most of the game. The speed - that was the biggest thing. The noise, speed and intensity.

That speed and intensity did only only surprise Easterby. Scotland had no answer for it, as their hosts went flat-out in the second half and ran in four more tries to eventually win 44-22.

When you see new guys coming in like that, getting an opportunity and then taking it, that gives you huge confidence. 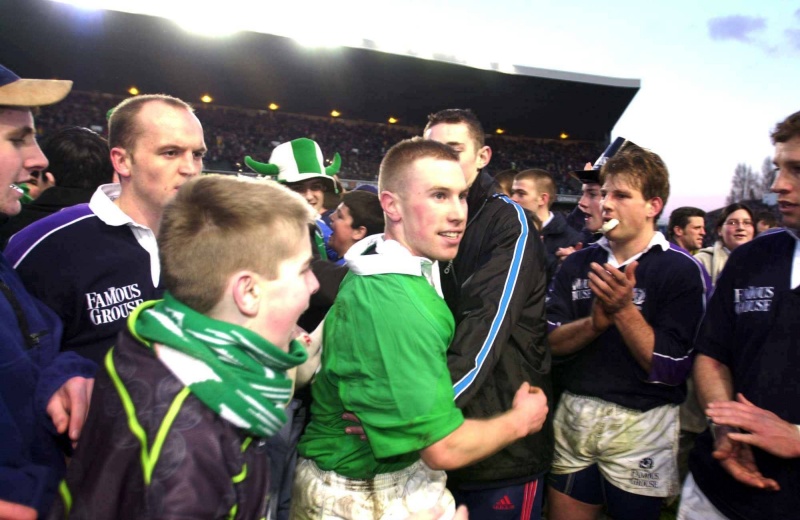 Peter Stringer is applauded off by Scotland players after Ireland's 44-22 win. (Photo by Damien Eagers/Sportsfile)

The games used to be more spaced out, so there would be a two-week gap, or more, between games. And, I don't think I'm breaking any confidences here, but there wouldn't have been that level of professionalism, back then, as there is now.That would have been drink-related, too!

For a long time, after games, you'd go to a black-tie dinner and anybody on that team could come up to have a drink with you, and you'd have to have that drink. For some people, that got very, very messy, and very quickly. Sometimes you had a whole team to go through, and the opposition. But, luckily, it was spread out a bit more [after the Scotland game] between the five of us. So I got away with it, just about!

That tradition was something O'Gara was only too happy to carry on with younger debutants, over the years.

Stephen Ferris, who made his Ireland debut in 2006, recalls:

"You have to down a drink and sing a song... I sang the Fresh Prince of Bel Air song as I knew I'd remember the words."

In the next game, OGara kicked twenty points and Horgan scored a brace of tries in a 60-13 park walk against Italy. The squad travelled to Paris in confident mood.

One of my greatest Ireland memories was the win over in France. We hadn’t won in Paris in twenty eight years before that. I would have watched Ireland over the years on TV and they would have started well for the first twenty minutes before France ran riot. We got there and there were a lot of new faces. There was no fear for us going there. Drico got his hat-trick and we built from those foundations. That win gave guys massive confidence.

Ireland would book-end that championship with another loss to Wales, at home, that softened their cough somewhat. By the end of the year, Gatland would be gone and Eddie O'Sullivan would take over as head coach.

It took until 2003 for Ireland to put themselves in with a genuine title chance - England beat them in a Grand Slam decider for both sides - but a Triple Crown, at least, followed in 2004. It had taken a huge overhaul and an even bigger leap of faith, but Ireland were finally competitive, and winning trophies, again.

The past 22 years have brought five Triple Crowns and four Six Nations titles that have included Grand Slams in 2009 and 2018. Only 1948 to 1951 comes close, but this has been a sustained run at the top, and one that should not be taken for granted.


popular
World Cup 2022 Day 12: All the major action and talking points
From Ireland to Argentina: Alexis Mac Allister's Irish roots explained
The FootballJOE Qatar World Cup 2022 Geography Quiz
France demand FIFA change result of World Cup defeat over 'rule break'
The World Cup 2022 team of the tournament so far
Cristiano Ronaldo 'agrees £173m-a-year deal' with Saudi club
Argentina reach World Cup last-16 with convincing win over Poland
You may also like
9 hours ago
From Ireland to Argentina: Alexis Mac Allister's Irish roots explained
6 days ago
Former England international admits he wishes he had played for Ireland
1 week ago
Two baffling omissions as four Ireland stars make World Rugby 'Dream Team' of the Year
1 week ago
Josh van der Flier claims World Rugby Player of the Year at Monaco ceremony
1 week ago
"Highlight of my Ireland career" - Behind the scenes as Jack Crowley and Ross Byrne covered for a legend
1 week ago
Bundee Aki reminded us all of his best qualities, on a night Ireland couldn't do without him
Next Page